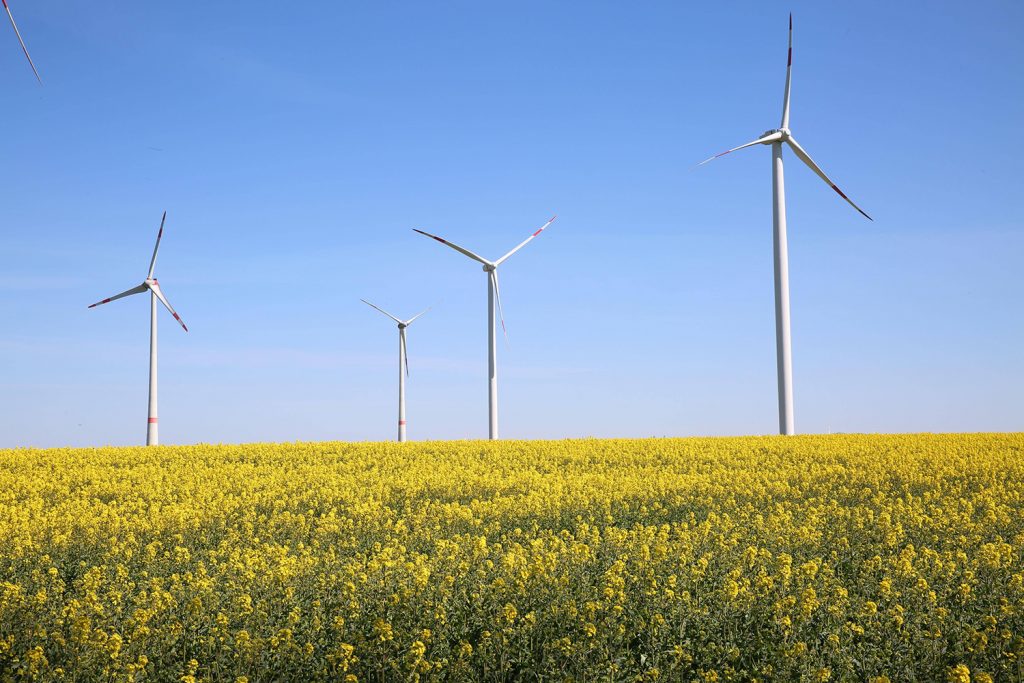 View on Thursday April 23 2020 not far from Fienstorf, Germany. (REUTERS)

As the nation braces for the presidential election next week, there’s arguably no issue beyond the COVID-19 crisis for which the stakes are higher than climate change policy. The increasingly alarming and measurable impact of global warming in the United States alone—as evidenced by the four hurricanes that have smacked the state of Louisiana since August and the recent devastation wrought by the California wildfires, which have scorched more acreage than in any year since CalFire began keeping records in 1932—means that the outcome on November 3 will mark a true make-or-break moment for climate change policy in the United States.

This hot-button topic is one on which the two candidates couldn’t be further apart—and also one that’s front and center in the minds of the American public. According to a survey conducted this summer by Pew Research Center, 68 percent of voters feel that climate change is an important issue in their voting decision. So, what can we expect on this issue from a second Trump term or a Biden administration?

The current administration’s view of the impact of climate change is reflected in its record and messaging over the last four years, during which the US environmental policy has been characterized by a denial of science and a steady dismantling of environmental policies governing clean air, water, wildlife, and toxic chemicals. The administration has rolled back seventy-two regulations—including limits on planet-warming carbon dioxide emissions—with twenty-seven more in progress.

These rollbacks include weakening fuel economy and greenhouse gas standards for cars and light trucks, lifting a freeze on new coal leases on public lands, and changing how the Endangered Species Act is applied, thus making it more difficult to protect wildlife from the long-term threats posed by climate change (like significant changes in habitat).

Conversely, the Trump administration issued an executive order to support the One Trillion Trees Initiative, which aims to promote and build resilient forests by restoring and conserving a trillion trees around the world by the end of the decade. Some ecologists estimate that this initiative would significantly lessen heat-related impacts by sequestering about 25 percent of the carbon that is currently in the atmosphere.

On the other hand, many of the Trump administration’s actions have positioned climate action as a threat to the US economy, while championing and facilitating the growth of the coal, oil, and gas industries (despite the fact that renewable energy presently represents the greatest area of job growth in the energy sector), and repeatedly labeling climate activists as alarmists. There is little reason to expect a change in this stance should President Trump be reelected.

Former Vice President Biden, meanwhile, has proclaimed climate change to be a national priority, promising unprecedented executive action out of the gate to both mitigate the impact of a warming planet and position the US as the global leader in pioneering environmental policy. He has vowed not only to immediately recommit to the Paris Agreement, but also to rally the rest of the world to ramp up their own domestic climate targets.

His overarching goal stateside is to ensure the United States achieves a 100 percent clean energy economy and reaches net-zero emissions no later than 2050. To set the country on the right track, he plans to advance legislation during his first year in office that establishes an enforcement mechanism that includes milestone targets by his first term’s end in 2025; makes a historic investment in clean energy and climate research and innovation; and incentivizes the rapid deployment of clean energy innovations across the country. Such innovations will focus especially on areas most vulnerable to climate change, including the coastal communities suffering from the effects of sea level rise, salt water intrusion and sunny day flooding, as well as the storms that increasingly hammer vulnerable areas, where 40 percent of Americans make their home.

To address the nation’s crumbling infrastructure—underfunded for decades and further strained by the impact of the COVID-19 pandemic as new work-from-home patterns test utility systems and underscore the need for widely accessible broadband internet and reliable transportation—Biden has also vowed to take action. In July he announced a plan to spend $2 trillion over four years on clean energy and climate resilient initiatives to rejuvenate the transportation, electricity, and building sectors, which he believes will create millions of new jobs—including one million jobs developing and manufacturing electric cars—for what he hopes is a foundation for sustainable growth and improved public health.

Former Vice President Biden’s goals include achieving a carbon pollution-free power sector by 2035, upgrading four million buildings over four years to meet the highest energy-efficiency standards, and providing every American city with more than 100,000 residents with high-quality, zero-emissions public transportation options. Furthermore, it promises to make communities that have suffered disproportionately from pollution—including low-income rural and urban communities and communities of color—the first to benefit from these far-reaching initiatives.

Predictably, there are factions of the climate change movement that believe Biden’s strategy to mitigate global warming isn’t aggressive enough. Climate advocacy groups have argued that the former vice president’s plan doesn’t provide a sufficiently clear and short path for the United States to decrease its dependency on fossil fuels. However, it stands to reason that in order to go further, he must first cross the election finish line—which depends in part on winning over undecided and moderate voters in swing states. And to do so, he needs to walk a careful line, especially in regard to energy policy in crucial states like Pennsylvania, where the fate of fossil fuel-based fracking weighs heavily on many voters’ minds.

As we move forward into the next presidential administration, the science and data are clear: the United States needs new policies and investments to avoid the worst human and economic impacts of climate change to our country. Next week’s election is arguably the most important in our history in regard to climate change and its increasingly traumatic—and expensive—ramifications, for both our country and our world.

Extreme heat: What can be done to stop this “silent killer”?

What’s at stake for energy in the 2020 election: An update

In the seven months since the publication of the Atlantic Council’s issue brief, “Election 2020: What’s At Stake For Energy,” the social and political landscape of the United States can hardly have changed more dramatically. This issue brief updates the Atlantic Council’s prior analysis and considers the new context surrounding a Trump re-election scenario and a Biden election, and the consequences for the energy sector.