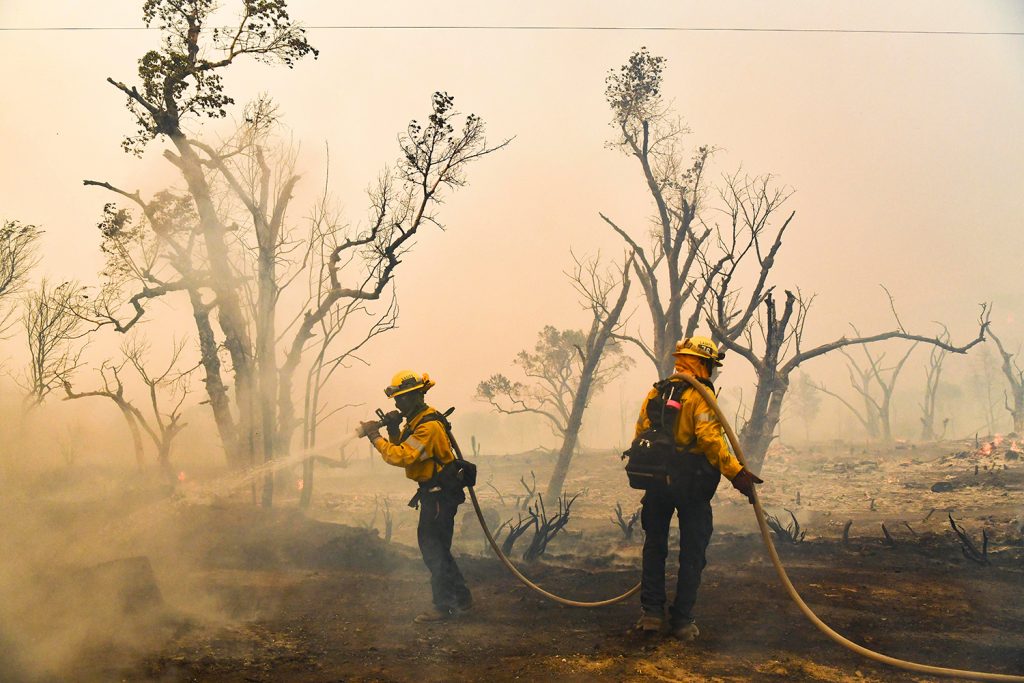 Los Angeles County Firefighters 1106 work to extinguish the Bobcat Fire in Valyermo, California on Sept. 18, 2020, one of the many neighborhoods near Angeles National Forest that have been threatened by the Fire. (Via REUTERS)

In the midst of the fray of the first debate between President Donald Trump and former Vice President Joe Biden, moderator Chris Wallace managed to silence the stage long enough to state, “I want to talk about climate change.” Climate change was not on the original list of debate topics, and— until the second half of the debate—looked like it would be left out of the conversation, mirroring the presidential debates in 2016. Wallace unexpectedly deviated from his agenda to ask pointed questions about the science and economics behind each candidate’s respective climate plans, reflecting a recognition that, more so than in 2016, public pressure (mainly from the left of the political spectrum) is forcing climate action to be a central issue in this year’s election. Both the international community and the private sector have strengthened their carbon commitments in the last four years, even as the Trump administration has worked to roll back environmental regulations. This election presents the United States with an opportunity to rejoin its peer nations and keep pace with the private sector in the drive for a green transition.

The debate highlighted the stark differences in each candidate’s climate approach and response to the extreme heat and extreme weather events affecting communities across the United States. California’s wildfires burned across 3.2 million acres of land by September—the largest amount of acreage in the state’s history—and it is only the beginning of the fire season. The Gulf Coast witnessed two major hurricanes in a span of three weeks in late August, part of a series of devastating storms increasing in frequency and severity recently. Trump’s response to mitigate future wildfires, a plan he repeated during the debate, is to improve forest management. However, the primary causes of the wildfires are the high temperatures and drought across California due to human-induced climate change.

Biden argued that ambitious climate action could limit the damage from future natural disasters and reduce the cost of recovery. He plans to create millions of jobs through improving energy efficiency, expanding electric vehicle charging, and making energy production carbon neutral by 2035. Meanwhile, Trump recommitted to his decision to leave the Paris Agreement and remove stringent emissions regulations to promote unfettered economic growth. He also noted that the cost of investment in clean technologies, such as electric vehicles, is too high for the US consumer, and labeled California’s forward-leaning plan to phase out gasoline-powered cars by 2035 as “crazy.” Biden argues that the investment in clean energy technology is worth the upfront cost to prevent the global rise of temperature, while Trump is content to bolster conventional industry for short-term gain. However, Biden’s plan draws criticism from the right due it its high price tag and the left for not going far enough to keep fossil fuels in the ground.

The climate policies of the Biden campaign more closely align with the international trends of increased commitment to climate action by both the public and private sector. This debate occurred only two weeks after Chinese President Xi Jinping announced China’s target to peak carbon emissions before 2030 and achieve carbon neutrality by 2060 during the UN General Assembly (UNGA), and the European Union increased its 2030 emissions reduction target to 55 percent as a stepping stone to its commitment to carbon neutrality by 2050. The private sector also made a series of bold statements on climate action during UNGA week, including Walmart’s pledge to carbon neutrality by 2040, General Electric’s exit from the market for new coal-fired plants, and PepsiCo’s commitment to 100 percent renewable electricity globally by 2040. These commitments by countries and private industry demonstrate that the world is moving forward on climate action, despite the absence of US federal leadership.

Trump’s denial of the science behind climate change and his attachment to the fossil fuel industry will threaten not only the future of the planet, but also US economic competitiveness and national security. If Trump should win and continue on a course where he disregards the severity of the risk, the United States will be at an extreme disadvantage, and—after four more years—will have missed the window of opportunity to make an impact in climate change mitigation. Conversely, a Biden administration would help the United States keep pace with the wave of corporate and international momentum towards a clean and secure energy future, if it can meet its lofty goals. As one of the countries with the largest contributions to greenhouse gas emissions and potential to influence the development trajectories of lower-income countries, the world cannot afford to have the United States stand on the sidelines any longer.

In mid-August, California made headlines when several days of rolling blackouts coincided with a massive heatwave, with up to three million residents facing up to four hours of power outages. For Californians, this crisis must prompt an examination of both the grid management practices that contributed to these blackouts, and the optimal way to store or supplement wind and solar power. And while many were quick to blame the blackouts on the states’s growing reliance on renewables, the underlying causes for the crisis can only be mitigated with more clean energy.

Against the backdrop of the COVID-19 pandemic, an economic downturn, and a renewed movement for racial justice, the report sets out a vision to reach net zero greenhouse gas (GHG) emissions by 2050 with recommendations on issues from infrastructure to incentivizing new technologies and creating jobs in the clean energy sector. The report also addresses pollution and environmental justice, the nexus between climate and public health, and conservation.