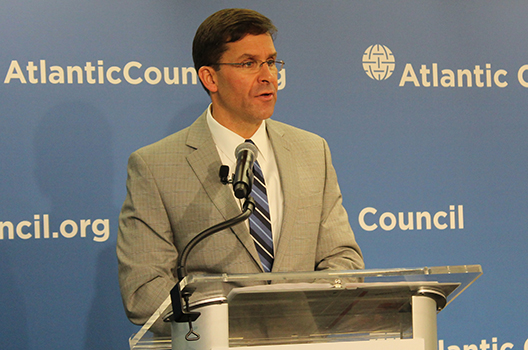 As Washington focuses on the threat emanating from Tehran, US President Donald J. Trump is nominating a new head for the Department of Defense, one who has kept his eyes on the long-term challenges facing the United States. Trump named Secretary of the Army Mark T. Esper as the new acting secretary of defense on June 18, and later announced that Esper would be nominated for the permanent position on June 21. While some national security experts are concerned that the Iran crisis may distract the United States from its primary challenge of great-power competition vis-à-vis Russia and China, Esper’s tenure as secretary of the army demonstrates a prioritization of great-power competition over other threats, and we should expect this trend to continue in his new role.

When predicting what to expect from Esper, it is essential to evaluate his time as the top civilian leader of the US Army. This approach is even more pertinent given the probable accession of Army Chief of Staff Gen. Mark Milley to Chairman of the Joint Chiefs of Staff later this year. Their performance thus far can provide insight into the future trajectory of an army-led Pentagon.

As secretary of the army, Esper often made his purpose quite clear: to modernize the army and prepare it for the future of warfare, especially against near-peer challengers such as Russia and China. On May 17, Esper delivered a keynote address at the Atlantic Council’s Commanders Series on “The Future of the Army in Great-Power Competition.” According to Esper, Russian and Chinese military modernization has produced a new array of capabilities which complicate the longstanding US ability to amass combat power and seize the initiative. A US army oriented toward counterinsurgency in Iraq and Afghanistan is not sufficiently formidable to fight or deter Russia or China. Thus, just as it did after its failure in the Vietnam War, the United States must once again reorient from counterinsurgency to major-power conflict. How do these concerns guide Esper’s vision for the future of US defense strategy?

“We know from history that not preparing for war invites aggression, and that is a losing proposition,” Esper said at the Atlantic Council, echoing the ancient Latin aphorism “Si vis pacem, para bellum” (“If you want peace, prepare for war”).  Thus, it is nearly certain that as defense secretary, Esper will continue to support modernization of the US military to better prepare it to win the next great-power war, so that such a war will never occur.

A logical result of this approach is the maintenance of “overmatch” by the United States, which is consistent with US policy under the Trump administration. Overmatch is the post-Cold War phenomenon of US military superiority over all domains of warfare. As secretary of the army, Esper believed it to still be possible in this multipolar era of near-peer competitors. There is no reason to believe his perspective will change as he acclimates to his new role, especially as he pursues the National Defense Strategy’s objective of “[m]aintaining favorable regional balances of power” abroad.

Maintaining a favorable balance of power requires new capabilities to counter and overcome those of Russia and China. Esper’s vision of the future of war is one in which cyberattacks against US networks thicken the Clausewitzian fog of war, precision long-range fires threaten the security of US forward operating bases, ubiquitous sensors complicate battlefield mobility, and enemy aircraft erode the United States’ longstanding air superiority advantage.

To respond to these developments, the US military must simultaneously draw from existing weapons systems and invest in new ones to develop modern capabilities. Accordingly, under Esper’s leadership, the Department of the Army has focused its modernization program around six clear and necessary priorities: long-range precision fires, including hypersonic missiles and new artillery systems; the next generation combat vehicle; future vertical lift via helicopters; an improved army network; integrated air and missile defense; and soldier lethality. Esper must now oversee this modernization process for all of the military services, ensuring that the broader joint force can effectively and efficiently prosecute large-scale conventional war.

Great-power competition also necessitates strong relationships with allies and partners, and Esper has demonstrated a sensitivity to this concern in the past. As secretary of the army, he has overseen preparations for multiple major exercises with allies, like the upcoming “Defender 2020” exercise in Europe, as well as the rotational Pacific Pathways program, both of which ensure interoperability with allies and contribute to extended deterrence in the European and Asia-Pacific theaters. Moreover, in March 2019, the army conducted a “no-notice” deployment and training exercise in Poland, thereby incorporating allies into US efforts to be more “operationally unpredictable,” according to the National Defense Strategy. Esper’s focus on allies is especially important at a time when the rhetoric of the Trump administration raises questions for multilateral relations among allies and partners.

Ultimately, Esper is well poised to follow the path set by former Secretary of Defense James Mattis and the National Defense Strategy. But as long as overmatch is the end, there will be many who argue that it is impossible, or simply too costly. If Esper is to demonstrate that US military superiority is still possible and affordable, he needs to execute two primary tasks. First, he must effectively manage the current Iran crisis without losing sight of the primary long-term challengers, Russia and China. He has argued that the army could plan for other contingencies and threats while focusing on great-power competition at the same time; he must now make that a reality for all the services.

Second, he must deliver clear and cogent arguments for why the United States needs certain capabilities (whether conventional or nuclear) and how they can realistically produce overmatch, while simultaneously eliminating those Department of Defense programs that do not contribute to great-power competition. As he explained at the Atlantic Council, he has already done so as secretary of the army, having “canceled, reduced, or delayed nearly 200 programs” to reallocate over $30 billion to the army’s six modernization priorities. This must continue at the department level in order to encourage legislators to provide the necessary budget for modernization.

If confirmed by the Senate as secretary of defense, Esper’s greatest challenge will be to steady the course of great-power competition amidst foreign threats and domestic doubt. His experience as secretary of the army demonstrates that he is up to the task.

Christian Trotti is a program assistant in the Atlantic Council’s Scowcroft Center for Strategy and Security.

Image: US acting Secretary of Defense Mark T. Esper speaks at the Atlantic Council on May 17, 2019.