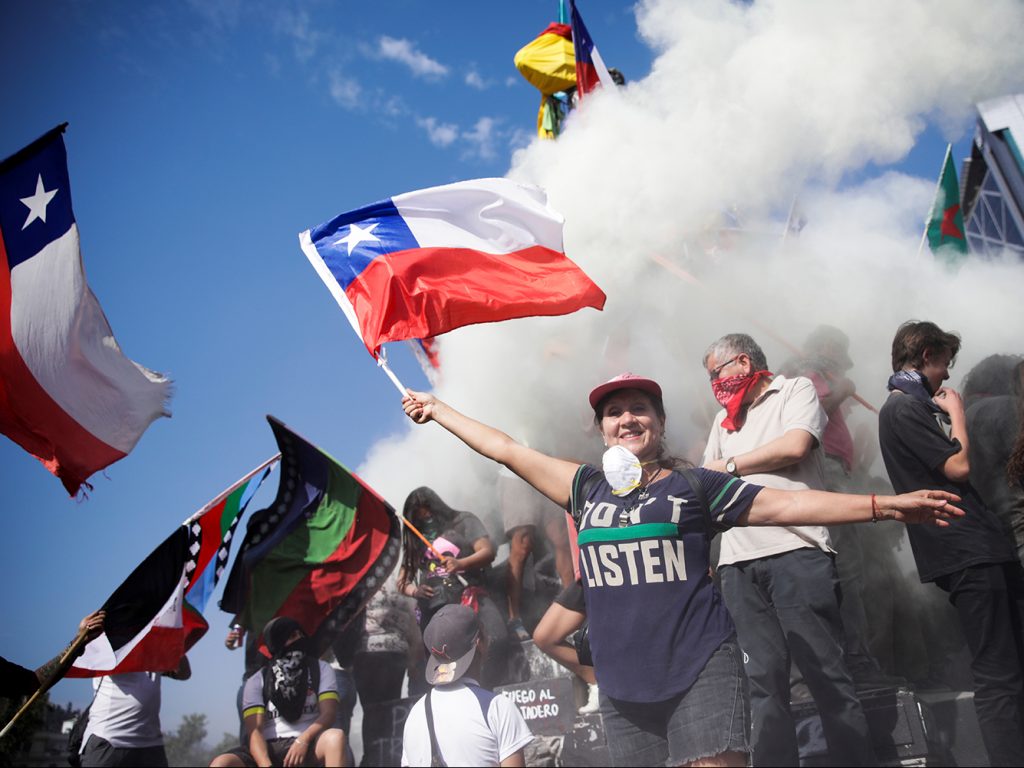 What started as a student protest over a spike in subway fares on October 18 has turned into a popular riot in Chile. Despite the twenty-six dead and thirteen thousand injured, the protesters continue to march and clash with the police in Santiago in an uprising that has surprised domestic, regional, and international experts alike.

Why are Chileans protesting?

The promise of economic development that followed the end of the Pinochet military dictatorship in the 1990s created unrealistically high expectations that many Chileans feel were not met. Thanks to a thirty-year series of democratically elected administrations, the country has achieved remarkable levels of economic growth and has long been regarded as one of the wealthiest countries in Latin America. But not all Chileans have benefited from this expansion, and the protests have revealed a widespread and deep-seated frustration with entrenched inequality. Privatized education, health care, and pension systems still disproportionately favor the wealthy, and they have left a significant portion of the population in poverty or debt.

But the protesters’ demands run far beyond pension system reforms and minimum wage increases; they want a new constitution. The current document dates back to the Pinochet dictatorship, and Chileans hope to revise it so as to limit the role of the government in the economy and formulate a plan that meets the needs and demands of the middle and lower classes.

To quell the protests, Chilean President Sebastián Piñera declared a state of emergency on October 19 and deployed ten thousand troops who have been given harsh rules of engagement. Rubber bullets have caused hundreds of eye injuries among protesters, including twenty-two-year-old student Gustavo Gatica, whose name is now chanted during riots as a symbol of resistance against police abuse.

Although Piñera temporarily backpedaled his response to the protest and denounced any abuse by armed forces against civilians, in late November he asked lawmakers to approve of a bill that allows security forces to protect infrastructure responsible for the delivery of basic services.

The president attempted to meet protesters’ demands with promises to increase the minimum wage, raise taxes on the wealthiest 1 percent, and pursue other reforms to curtail inequality. He also asked members of his cabinet to resign—although the health and education ministers remain in power—and proposed a plan to examine and improve the constitution, but the president’s efforts have yet to satisfy protesters.

In mid-November, Chile’s most influential political parties signed an agreement to replace the constitution. And in a referendum that will be held in April 2020, Chileans will decide whether the existing congress or a group of newly-elected legislators and selected citizens should draft the new constitution.

Piñera is under increased pressure to quell the chaos as the prolonged protests are starting to affect Chile’s economy. Demonstrations could lead to the loss of up to 100,000 jobs and 1.2 percent of economic growth. On December 2, the Chilean government announced a $5.5 billion economic recovery plan to compensate for the recent decline. As economic costs increase, Piñera will face increased pressure to meet protesters’ demands or resign.

In the past few months, large waves of protests have broken out in different countries across Latin America, from Chile to Bolivia and Colombia. This trend is a wake-up call on popular frustrations and widespread discontent, and as governments scramble to come up with appropriate responses, protesters’ demands acquire more and more potential to influence the future of the region. Piñera should take this opportunity to address deep-rooted issues in Chile, and his attempts to navigate this crisis can serve as an example to other governments in Latin America.

Brazil and Argentina surprised by tariff announcement: What comes next?

Argentina’s election: The international implications of a Fernández government

Supporters of President Mauricio Macri hope that the new Fernández government will follow a moderate and pragmatic agenda, yet there is no doubt that it will be a departure from the current course, with regional and international repercussions

The departure of former Bolivian President Evo Morales amid allegations of electoral fraud, coupled with political instability in several Latin American countries and the long-standing crisis in Venezuela, means that “the one constant in the region is uncertainty,” Jason Marczak says

Image: A woman waves a Chilean flag during a protest against Chile's government in Santiago, Chile December 6, 2019. REUTERS/Andres Martinez Casares