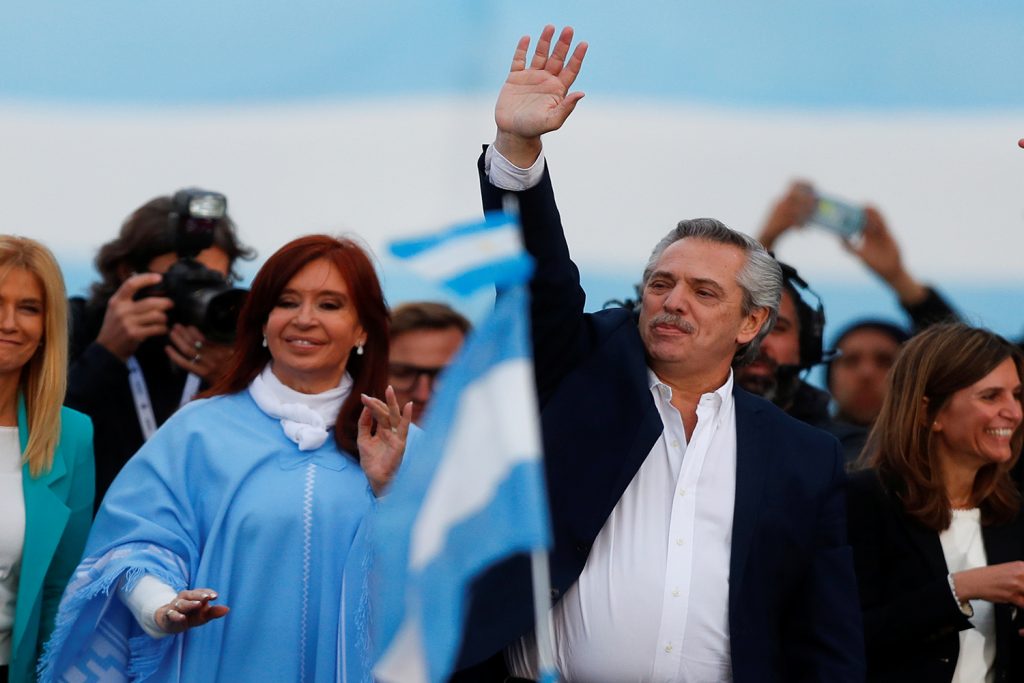 On the evening of October 27, after voting stations across Argentina closed and ballots were counted, Alberto Fernández of the Peronist Justicialist Party (PJ) was declared president-elect of Argentina. Fernández accrued 48 percent of the votes, winning the election with no need for a run-off. In Argentina, candidates must receive 45 percent of votes or 40 percent support with a ten-point difference over the nearest rival.

Alberto Fernández is a career politician who previously served as chief of staff to late President Néstor Kirchner, as well as to his wife and successor, Cristina Fernández Kirchner (CFK). Yet Fernández left the Kirchnerist field in 2008 over disagreements with the latter Kirchner’s policies, becoming one of CFK’s most vocal critics. Given this clash, it was unexpected when Fernández and CFK announced in May they would be running on the same ticket, with her as vice-president. Despite—or perhaps because of—this unusual matching, Fernández was favored to win the elections. The possibility was reinforced after his victory in the August 11 national primary known as the PASO (Primarias Abiertas Simultáneas y Obligatorias). With CFK as his running mate, the presidential candidate won over both Argentine Peronist and centrist voters.

Supporters of President Mauricio Macri hope that the new Fernández government will follow a moderate and pragmatic agenda, yet there is no doubt that it will be a departure from the current course, with regional and international repercussions. Regardless of how sharply Fernández veers away from his predecessor’s trajectory, it is already clear that his government will enact change in several key issues of foreign affairs.

Argentina has a rocky history with the International Monetary Fund (IMF), having defaulted on its debt in 2001 and cutting ties with the organization from 2006 to 2015. When Fernández takes office on December 10, he will inherit an economy in recession and in the middle of a debt crisis, with increasing inflation and poverty levels. Disappointing economic growth coupled with the incomplete implementation of economic reforms explain the dire state of the Argentine economy. Macri tried to gradually liberalize the economy, but ultimately lost momentum and much-needed political and public support for expenditure cuts, aggravating the debt incurred from the IMF’s $56 billion loan—the largest in the organization’s history.

Fernández wants to avoid the IMF’s mandated austerity policies and has expressed his desire to restructure the country’s debt, prolonging payments. Campaign members, however, seem to disagree on the way forward and the incoming president leader must present convincing evidence of a positive economic outlook and a solid policy framework if he wishes to keep receiving loans from the financial institution. Whether Fernández will strike a deal with Argentina’s creditors will be crucial for defining the course of Latin America’s third largest economy.

After twenty years of discussions, supporters of free trade celebrated the announcement of the trade agreement between the Southern Common Market (Mercosur) and the European Union this year. Trade relations between the two blocs was valued at around $85 billion in 2018. The deal, which has already seen opposition on both sides of the Atlantic, will now face the scrutiny from the Fernández administration. Despite declaring himself in favor of the trade agreement, the president-elect has questioned the treaty and has not ruled out the possibility of revising it.

President of Brazil Jair Bolsonaro, who has repeatedly criticized both Kirchnerism and Mercosur, is considering supporting the suspension of Argentina’s Mercosur membership or even leading Brazil out of the trade bloc altogether, should Fernández delay or block the treaty’s implementation. In 2018, the two countries exchanged over $26 billion worth of goods and services.

As the Venezuelan crisis deteriorates, the election of Fernández will likely signify a decrease in support for Juan Guaidó’s interim government. Critical of Macri’s foreign policy, the new commander-in-chief rejects intervention, declaring that “’[he] would like Venezuelans to solve the problem.” Fernández has threatened to leave the Lima Group due to US President Donald J. Trump’s stringent anti-Maduro position. He favors adopting a stance more akin to that of Mexico and Uruguay, who have thus far refused to take a firm position either in favor or against Nicolas Maduro. The main question remains the degree to which we will see a return of Argentine support for Maduro or simply a loss of Argentine leadership in the Lima Group and the international community more broadly. The US Department of State has already contacted the Argentine leader to try to convince him to moderate his position on Venezuela in order to maintain support for the continued regional pressure on Maduro.

As Argentina struggles to pay off its IMF loans, China and Russia have become increasingly attractive sources of investment and active trade partners. Fernández wants to make Argentina “less dependent” on the United States and has met with Chinese and Russian officials during his campaign. The two countries have plans for ambitious infrastructure and energy projects, including the construction of nuclear powerplants. China, in particular, which has been increasing its presence in the country, signed a deal to open its market to Argentine soymeal in September 2019 and is seen favorably by most Argentines.

Fernández faces no easy task in steering Argentina towards a path of prosperity. Moreover, the current social tensions and instability in Latin America and around the world places the country’s future at a crossroads. Although the outcomes of a new Fernández administration are uncertain, the return of Peronism to Argentina ensures a reversal of incumbent President Macri’s policies and a realignment with the region’s leftist governments.

Belt and Road in Latin America: A regional game changer?

A pragmatic, proactive, and forward-thinking approach is key to ensuring that a massive and evolving Belt and Road Initiative (BRI) provides concrete benefits to Latin America and the Caribbean. In particular, countries in the region—and the United States—should take stock of four emerging BRI trends to stay ahead of the game.

Twenty years after the United States enacted Plan Colombia, Ivan Duque said the United States and Colombia are ready for the next chapter of their partnership, focusing on solidifying the rule of law , promoting entrepreneurship and trade, and managing growing regional challenges.