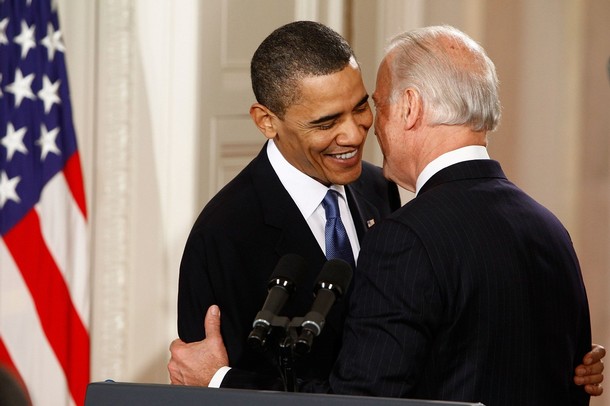 U.S. Vice President  Joe Biden’s crass congratulatory whisper to President Barack Obama after the House of Representative’s March 21 passage of the healthcare bill was one bookend for an extraordinary presidential week by any account. The other bookend was the president’s surprise visit to Afghanistan, ostensibly to deliver some tough love to President Hamid Karzai and the Afghan government to get its act together.  In between came the visits of Israeli Prime Minister Binyamin Netanyahu and a high-level Pakistani delegation to start a new strategic dialogue with the United States. Oh and yes — the United States and Russia agreed to a new strategic arms treaty.

The key question is, to paraphrase Biden, which of these events will prove to be real Big Fat Deal in the positive sense he meant?

Health care reform has been a White House obsession. Sadly, both Democrats and Republicans got it partly right and therein lies a tragedy.  Health care desperately needed reform and major overhaul. But the bill has many flaws and almost certainly won’t reduce the costs.

The Republican alternative of “repeal and replace” is delusional. Republicans won’t win a veto-proof majority in both houses of Congress in 2012. Indeed, given the Democratic “spin machine” and the fact that long-term impact of this law won’t be felt until well after the November elections, at this point, Democrats seem headed to maintain control of Congress and the decisive turnaround predicted by Republicans just a week ago may well be stillborn.

The Big Fat Deal is that this debate has twisted our system of checks and balances into a de facto or pseudo parliamentary form of government in which the majority rules. A coarsening of the already septic partisanship pervasive in government and a worsening of an already broken political process are predictable fallouts.

A second Big Fat Deal could be a surge in the popularity of the Democrats and a further decline in GOP ratings that would push both parties further to their respective and very minority extreme wings. All in all, this won’t be good for the republic.

About Israel, the Big Fat Deal could be — and this is supposition —  a major U.S. course correction in its approach to the Arab-Israeli-Palestinian conflict in the sense of using more muscle on the Israeli government to force a real solution. Timing is critical. And such a decision, if it is made, would probably not be implemented until after the November elections to deprive Republicans of an obviously explosive issue.

About Pakistan and Afghanistan, there may not be a positive Big Fat Deal. Obama reiterated in his talk to a few thousand American troops assembled at Bagram Air Base that disrupting and “destroying” al Qaeda was the goal. If that indeed were the case, it seems that by making the Taliban central to the current military operations in Helmand and presumably in Kandahar, not only is al Qaeda diminished. Worse, the real issue which is dealing with the Pashtuns and integrating them into government is obscured.

Regarding Pakistan, the administration leadership believes a lot was achieved in the dialogue. Yet whereas the United States is pumping many tens of billions of dollars into Afghanistan, Pakistan remains a relative orphan. Given the economic fragility of Pakistan and the absence of real trade and assistance, as well as the volatile nature of its domestic politics, conditions aren’t improving. Since the administration rightly believes that Pakistan is critical to success in Afghanistan, its priorities don’t seem to fit that understanding.

The combination of ignoring or downplaying the vital issue in Afghanistan of the Pashtun in favor of a rhetorical anti-al Qaeda policy and not providing Pakistan the tools it needs could be a Big Fat Deal and not one that the United States will like.

Finally, the strategic arms agreement with Russia could be a Big Deal if it leads to improved relations between Moscow and Washington. Ironically, the terrorist attacks against the Moscow Metro earlier this week could also bring the two states closer. The signs to watch are how the United States and NATO deal with Russia in the Strategic Concept that is being written now and will be presented at the NATO heads of state summit this fall in Portugal; the future of the several thousands of tactical nuclear weapons Russia has stationed in its western borders; and Russia’s stance on Iran.

A cooperative as opposed to a confrontational Russia is in everyone’s interest. With this arms deal and the looming strategic concept for NATO as well as how Iran and its nuclear ambitions are handled, the Big Fat Deal could go either way.

This was an amazing week for any president. The challenge is to turn the opportunities into realities. If even a portion of that can be accomplished, Obama could well have assured a second term.

Harlan Ullman is an Atlantic Council Senior Advisor and chairman of the Killowen Group that advises leaders of government and business.  This column was syndicated by UPI. Photo credit: Getty Images.