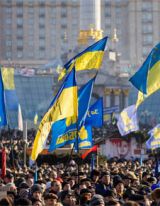 Vladimir Putin’s campaign to divide, destabilize, and dismantle Ukraine has reached a new phase with this week’s surge of violence in the pivotal Black Sea port of Odessa. As bands of armed ethnic Russian brigands battle Ukrainian government security forces in cities big and small throughout eastern Ukraine, the stakes for the West become all the more clear.

Putin has a plan — disrupt Ukraine’s May 25 presidential elections in order to delegitimize the interim government in Kiev. Moscow can then retain effective control over Ukraine’s future. The American and European response — weak, disjointed, and ineffective — hasn’t been nearly as impressive. All this matters because what happens in Ukraine is important to American interests in a still-vital Europe. Here are three reasons why.

First, Putin’s success in Ukraine is resounding ominously in Central Europe — the countries once prisoners of the Warsaw Pact and, in the case of the three Baltic states, the Soviet Union itself. If he gets away with the destruction of a major state like Ukraine, what would stop him from destabilizing an even weaker Moldova? Might he then even be tempted to undermine NATO itself? By launching covert campaigns to incite the large ethnic Russian populations in NATO allies Estonia and Latvia, Putin could deliver a potentially devastating blow to NATO’s credibility to safeguard the security of its members. Unless NATO confronts Putin with much tougher sanctions and a credible conventional force in the Baltics, he may calculate he could get away with it.

Second, Russia’s intervention in Ukraine has thrown Washington’s relationship with Moscow into a deep freeze. The Obama administration has tried working with a troublesome Moscow to curb Iran’s nuclear program, secure Syria’s chemical weapons, resupply America’s army in Afghanistan, and stop Muslim terrorists. It is not at all certain Putin will continue to cooperate on these front-burner issues. As a result, while the United States and Russia may not be experiencing a new Cold War, they have resumed a long-term struggle for power in Europe. For someone whose first years in the American Foreign Service coincided with the battle against Soviet influence in the Middle East and Europe, it is surreal, indeed, to return to a modern variation of President Kennedy’s “long twilight struggle.”

Third, and most importantly, Putin’s aggression challenges the entire architecture of the post-Cold War order — the Europe “whole, free, and at peace” proclaimed by President George H.W. Bush when the Soviet Union imploded in 1991. Europe subsequently enjoyed a historic peace as the ex-Soviet satellite states rushed to join NATO and the European Union with the knowledge that, sooner or later, a Greater Russian nationalist would return to reclaim Moscow’s “near abroad.” That person is Putin. As Russia builds new walls in Europe, Obama needs to pivot back to place Europe once more at the center of our global strategy.

American and European leaders, however, aren’t on the same page. Obama and German Chancellor Angela Merkel failed to agree on tougher sanctions against Russia when they met in Washington last week. US and European economic aid to Kiev is insufficient. And NATO can’t even agree on how to protect Poland and the Baltic states. The result is a series of weak, half-hearted measures that have failed to alter Putin’s behavior in any meaningful way.

Obama is now confronted with the most serious international crisis of his presidency. As this week’s Economist cover story warned, “Mr. Obama began his presidency with the world wondering how to tame America. Both he and his country need to realize that the question has changed.”

Indeed, I heard a strikingly familiar refrain during recent visits to the Netherlands, Hong Kong, and Brazil. A surprising number of well-informed people — all friends of America — puzzled why Washington is no longer leading with its customary ambition and self confidence. They seemed to be saying: Where is American power and leadership when the world needs it most?

Nicholas Burns is a professor of the practice of diplomacy and international politics at Harvard’s Kennedy School of Government. Follow him on Twitter @rnicholasburns.