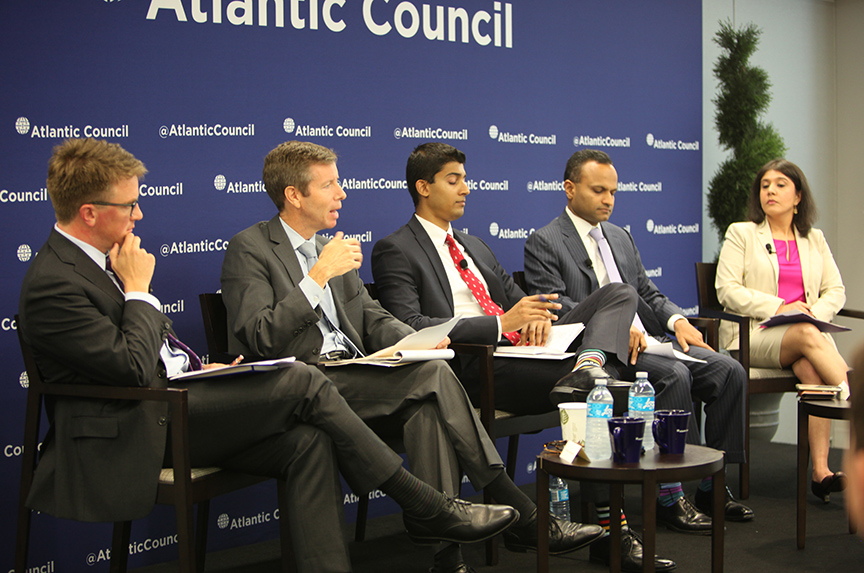 From left: Thomas Cunningham, deputy director of the Atlantic Council’s Global Energy Center, moderated a discussion September 12 on the US-India energy relationship with John Morton, senior director for energy security and climate at the National Security Council; Varun Sivaram, acting director of the program on energy security and climate change at the Council of Foreign Relations; Nandan Nelivigi, a partner at White and Case LLP; and Tanvi Madan, the director of the India Project at the Brookings Institution. (Atlantic Council / Victoria Langton)

The White House is optimistic that India, a major polluter, will this year ratify the Paris climate agreement, increasing the likelihood that the deal that is intended to cut greenhouse gas emissions will come into effect before US President Barack Obama leaves office in January of 2017.

“We are very, very committed to seeing this enter into force as soon as possible this year, and that was a real objective of this administration. I think we’re feeling pretty confident that we’ll get there,” John Morton, senior director for energy security and climate at the National Security Council, said at the Atlantic Council on September 12.

With regards to India’s ratification of the agreement, he added: “We are pushing them [India], and they are pushing themselves. We’re optimistic we’ll get there with or without them, although better with them for sure.”

Morton spoke in a panel discussion on the US-India energy relationship. He was joined on the panel by Varun Sivaram, acting director of the program on energy security and climate change at the Council of Foreign Relations; Nandan Nelivigi, a partner at White and Case LLP; and Tanvi Madan, the director of the India Project at the Brookings Institution. Thomas Cunningham, deputy director of the Atlantic Council’s Global Energy Center, moderated the discussion, and outlined the major challenge posed by India’s struggle between maintaining economic development and achieving the proliferation of clean energy resources. These experts assessed the methods in place for clean energy deployment in India and evaluated the policy and financial mechanisms in place, while underscoring the importance of international cooperation.

In a meeting with Obama at the White House in June, India’s prime minister, Narendra Modi, pledged to try and ratify the Paris agreement this year. The government of India has more recently, however, said that it cannot commit to ratifying the agreement by the end of 2016.

“While many in our government want to go forward with the terms of the agreement, there is still a feeling that ratifying the agreement would be tying our hands in terms of what we can do economically,” Rajendra Abhyankar, a former Indian diplomat who is now a professor at Indiana University, told the New York Times.

“And from an international point of view, the sense is, why should we sign on if the United States might one day drop out?” he said. “The United States has signed on for now, but what will happen once [Republican presidential nominee Donald] Trump comes?”

Solar power, which comprises nearly 40 percent of India’s energy attributed to non-fossil fuels, will constitute the largest component of India’s commitment in Paris. Sivaram discussed India’s pledge to achieve one hundred gigawatts (GW) of renewable energy by 2022 and the role of solar power in achieving this goal.

Claiming that India’s commitment to achieve 100 GW of renewable energy is not simply about “the headline number,” Sivaram said it is also the practical application of various forms of solar energy in the daily lives of the Indian people that will prove significant. Ultimately, “domestic benefits will support political coalition,” he said.

India has one of the most ambitious and exciting energy markets in the world, according to Morton. “The key to climate change is unlocking private capital flows into India,” he said. However, Morton stressed the need to identify enabling environments, targets, and hindrances in order to discuss clear pathways forward.

Due to challenges such as the foreign exchange risk and the unequal treatment of non-Indian banks, investors from the US private sector are moving slowly and looking for indications of the Indian government’s commitment, according to Morton.

Nelivigi agreed and addressed the financial concerns underpinning the advance of climate and energy reforms in India. According to Nelivigi, technology and capital remain largely in the hands of the private sector in India, and the government needs to facilitate both dialogue and the movement of these commodities.

The practical application of these goals depends on financial and policy details, according to Nelivigi, yet therein lie many of the challenges facing reform. In India, utility-scale development remains domestic, Nelivigi said, yet the credit of domestic developers and lenders in India has suffered. Current domestic capital is adequate to achieve three to five GW of renewable energy annually, yet to achieve the projected 100 GW by 2022, as well as diversify risk for domestic developers, international capital is needed.

Additionally, the standardization of documents proves critical for allowing distribution companies to move quickly and nationwide. Finally, India’s approach to foreign exchange regulation provides a further hindrance. Focusing on a holistic assessment of India’s approach to climate and energy reform, Nelivigi said: “India draws big, beautiful broad strokes, but then the short strokes are sometimes ugly.” He said the Indian government must continue toward its goals, but more aggressively and efficiently.

It is in this light that the US role in its bilateral relationship with India may be seen as one of support. Madan said that the focus on energy and climate contributes to the breadth and depth of the cooperation. The United States both supports and shapes India’s rise, “helping it to grow and develop more cleanly,” she added.

However, Sivaram stressed the need for constructive conversation between the United States and India, a theme reinforced throughout the discussion. Ultimately, it proves crucial to the strength of an increasingly important relationship that the two nations treat one another as equal partners standing on common ground, where historically this has not always been the case, according to Sivaram.

Ultimately, if the Indian government can mitigate risk in order to attract international private capital, and the United States can work toward treating India as a country on equal footing and part of a symbiotic partnership, the experts involved in this discussion expressed optimism about India’s ability to achieve and exceed expectations, particularly with regard to the Paris agreement.