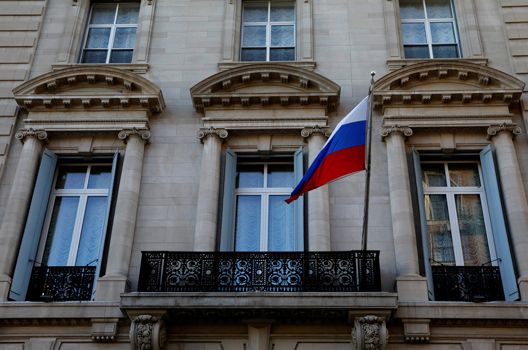 By expelling sixty Russians from the United States and closing the Russian consulate in Seattle, the administration of US President Donald J. Trump has made a decisive move against the Kremlin for its attack in the United Kingdom (UK).

These actions were taken alongside announcements from fifteen European countries that they, too, would expel Russian diplomats from their nations over Moscow’s actions.

The White House announced on March 26 that the expulsion of Russian citizens—including twelve intelligence officers from Russia’s mission to the United Nations—was a direct response to the poisoning of former Russian spy Sergei Skripal and his daughter Yulia with a nerve agent on March 4. Russia’s consulate was closed due to its proximity to submarine bases and Boeing offices in Seattle.

The international community’s response to the Skripal attack in Salisbury, UK, was initially defined by general outrage, now giving way to concrete action.

British Prime Minister Theresa May issued an immediate statement in the wake of the attack pointing to the Kremlin as a “highly likely” suspect, and the leaders of France, Germany, the United States, and United Kingdom issued a joint statement on March 15 condemning the attack.

On March 14, May expelled twenty-three Russian diplomats in response to the attack. She followed that action with outreach to other European Union (EU) allies at the European Council summit in Brussels on March 23-24. After meetings throughout the weekend and sharing of additional intelligence among allies, fifteen European nations, including France, Germany, and Italy, announced their solidarity with the UK and plans to expel Russian diplomats from their own countries.

Now the United States has followed suit. In a statement, the White House press secretary said: “With these steps, the United States and our allies and partners make clear to Russia that its actions have consequences.”

Atlantic Council experts reacted to Trump’s decision to remove Russians from US soil. Here is their take:

“The White House statement announcing the expulsion of Russian diplomats and the closure of the Russian consulate in Seattle sends a strong message, made all the more powerful as a result of the coordinated expulsions of diplomats on both sides of the Atlantic. However, we have to understand that expulsions are a symbolic step without many lasting consequences. Russia will almost certainly respond to each announcement with its own reciprocal actions expelling Western diplomats from Russia. The fact that the White House called Russia out for violating the Chemical Weapons Convention is important, and demands a stronger and more consequential response.

“A strong response would impose financial sanctions on Russia, including full (Iran-style) blocking sanctions on Russian financial institutions, a prohibition of transactions with Russian defense companies, and a termination of the Nordstream II pipeline. Such steps would have a strong impact on Moscow’s calculus. The expulsion of Russian diplomats alone, however, is unlikely to deter Russia from its aggressive behavior.”

“It is encouraging that the Trump administration, in coordination with our allies in France, Germany, the UK, and other countries of the EU, expelled Russian diplomats in response to the Skripal poisoning. This is important because allied unity is one of our greatest advantages in dealing with Kremlin aggression and provocations. The administration’s decision not just to expel sixty Russian diplomats, but especially to close the Russian Consulate in Seattle, will make it much harder for Moscow to conduct espionage in the United States.

While excellent, the coordinated transatlantic action against Moscow should not be an excuse for the UK to rest after its expulsion of twenty-three Russian diplomats. The Skripal attack is the second known Kremlin chemical weapon strike on British territory. That requires a much stronger reaction than expelling twenty-three diplomats. Let’s hope that vested interests in London do not prevent the imposition of British sanctions. If we want to see an end to such violations of sovereignty, the United States and others in Europe should coordinate with London to place additional sanctions on Russia.”

“These measures are fantastic for two reasons. We are responding to the assault on the sovereignty of our oldest friend and NATO ally and we are doing it in unison with the European Union. However, this step cannot be the end.

“We still need a comprehensive piece of legislation addressing all of the vulnerabilities the various Russian attacks have revealed in our society.

“The president also needs to implement the roughly six categories of mandatory sanctions under the Countering America’s Adversaries Through Sanctions Act (CAATSA) not yet implemented—including sanctions on the purchase of crude oil from Russia. Further, sanctions need to be ratcheted up from a feather-light touch to medium pressure, moving closer to the maximum pressure, which has been the administration’s approach to North Korea.”

“Despite open disagreements and souring relations with May, the Trump administration’s decision to expel sixty Russian officials from the United States shows that Washington will still honor its commitments, and that the special relationship between the United States and the United Kingdom still has a pulse.

The decision by the United States and over fifteen allies and partners (and counting) to expel Russian diplomats in solidarity with the UK over the poisoning of an ex-spy in Salisbury is a welcome first step in addressing an over-revanchist Kremlin. As the time comes to increase pressure on Moscow, let us hope for an equally united front.”

“This is arguably the first significant escalatory action that the Trump administration has taken against Russia, not mandated by Congress or following an indictment. Although this would have been more impactful had it been done in coordination with the UK’s expulsion, it is a significant action nonetheless, as it opens the possibility for more willingness to confront Moscow. Interestingly, this US response to the Skripal assassination attempt is probably more forceful than the UK’s, especially the shuttering of the Seattle consulate. There is still more to be done to deter Russia’s aggression, including a need for forceful statements by the president himself, but today’s action deserves congratulations.”

“The Trump administration’s decision to expel sixty Russian diplomats and close the Russian consulate in Seattle is a serious and harsh measure, which was taken in close coordination with US allies to punish Russia for actions related to the poisoning a former Russian intelligence officer in the UK. The closing of the Russian consulate in Seattle ends Russia’s official presence on the US west coast, a step that will hamper Russia’s commercial, intelligence, and diplomatic activity in the United States. Taken in parallel with the administration’s recent moves to sanction a small amount of individuals seeking to undermine US elections and US interests, it seems the administration’s policy of avoiding actions that punish Russia for its aggression may be shifting. That said, these actions are long overdue and not enough, as this administration has been mostly cautious in taking action against Moscow.”

Image: The Russian flag flies on the Consulate-General of the Russian Federation in Manhattan in New York City, March 26, 2018. (REUTERS/Mike Segar)