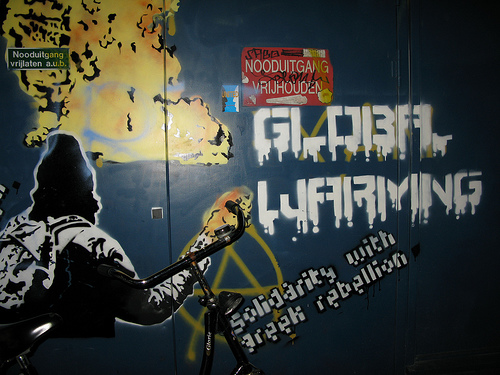 As climate negotiators gather in Bonn for a key preparatory meeting for the UN post-Kyoto climate talks in Copenhagen next December, international expectations are high that the Obama administration will bring the U.S. back into the fold.

A headline on the lead front page story in the N.Y. Times a couple of Sundays ago captured this buoyant mood: “Obama’s Backing Increases Hopes for Climate Pact.” (The actual story about prospects for a post-Kyoto accord was a bit more sober, describing some daunting realities – replete with a chart showing how most European nations belonging to the Kyoto Protocol have fallen short of meeting their targets for reducing emissions.) But is such optimism about December’s Copenhagen climate parlay warranted?

The president’s proposed budget, which based its projections on a cap-and-trade plan for greenhouse gas (GHG) emissions, underscores that climate change is a priority for the administration. It calls for investing heavily in energy efficiency, smart grids, and ramping up investment in R&D for clean energy technologies. And certainly, Obama has appointed senior advisors in the White House, EPA, and departments of State and Energy with much experience and involvement in various aspects of addressing these issues.

But in sex and politics, timing is everything.

If energy prices were consistently low for a long time and the economy were growing steadily at three to four percent, things might look a lot different. Cap-and-trade legislation might sail through the Congress. But in the midst of a global recession, one that appears more severe in some parts of Europe than it is in the U.S., it would be wise to lower expectations.

Cap-and-trade legislation is running into significant opposition in Congress. While not a direct tax, there are concerns that such legislation will raise the cost of electricity and transport. Many analysts expect that utilities and energy producers will pass such costs on to consumers.

The reality is that the best intentions notwithstanding, addressing climate change is extremely difficult for a host of complex reasons:

This winners-and-losers issue is evident in the U.S. debate, and helps explain why there is significant opposition — across party lines — to proposed measures to fight climate change in coal-producing states, or auto states like Michigan. Witness this recent editorial from the Detroit News headlined, “Cap-and-Trade Plan Will Sink Michigan.”

President Barack Obama’s proposed cap-and-trade system on greenhouse gas emissions is a giant economic dagger aimed at the nation’s heartland — particularly Michigan. It is a multibillion-dollar tax hike on everything that Michigan does, including making things, driving cars and burning coal.  […] Such a tax will hit the Midwest particularly hard, which is why House Minority Leader John A. Boehner, R-Ohio, told the New York Times, “let’s just be honest and call it a carbon tax that will increase taxes on all Americans who drive a car, who have a job, who turn on a light switch, pure and simple.”

A recent piece in the New Republic (“A Cap and Trade Calamity?”) outlined the dynamics:

Support for environmental legislation is strongest on the coasts, weakest in the interior areas that depend more heavily on coal-fired power plants. The Midwest, which has already been hit hard by the collapse of manufacturing, would take a second blow…. It is hard to imagine Midwestern Democrats voting for cap-and-trade in current economic circumstances, and perhaps not in any economic circumstances–that is, unless they receive credible assurances of dollar-for-dollar offsets against the higher costs their constituents would have to bear.

Most economists argue that a carbon tax would be more efficient way to place a value on fossil fuels, and might not be excessively burdensome if it were introduced in a largely revenue-neutral way by changing the tax code and proportionately reducing other taxes. Despite its flawed record in Europe, cap-and-trade has been more appealing to Congress, as it avoids directly levying a new tax.

One key to reducing GHG emissions will be the development and commercialization of new clean energy technologies. The two largest sources of GHG emissions are coal production and use and transportation. Technologies such as those able to capture and store emissions from coal before they enter the atmosphere, and more efficient transportation –more autos that are use less or no petroleum (e.g. hybrid, electric, gasoline, or run on biofuels) currently exist or are in the process of being perfected.

But creating electric autos, or cellulosic ethanol, or cost-competitive carbon capture and storage that are commercially viable are still just over the horizon. We are in effect, in a race against time to commercially develop and diffuse such new technologies globally before either climate change advances to the point where reversing it proves extremely difficult.

All these aspects suggest why, even with the best intentions addressing climate change effectively remains a tough challenge. Getting agreement on most international issues among dozens of nations is always difficult. In regard to climate change, this is particularly so. This perspective may prove helpful in understanding and assessing what happens on the road to and at the Copenhagen climate meeting and beyond.

Robert Manning is a Senior Advisor to the Atlantic Council.  The views expressed here are solely his own, not those of any U.S. government agency.   Photo by Flickr user Shira Golding under Creative Commons license.