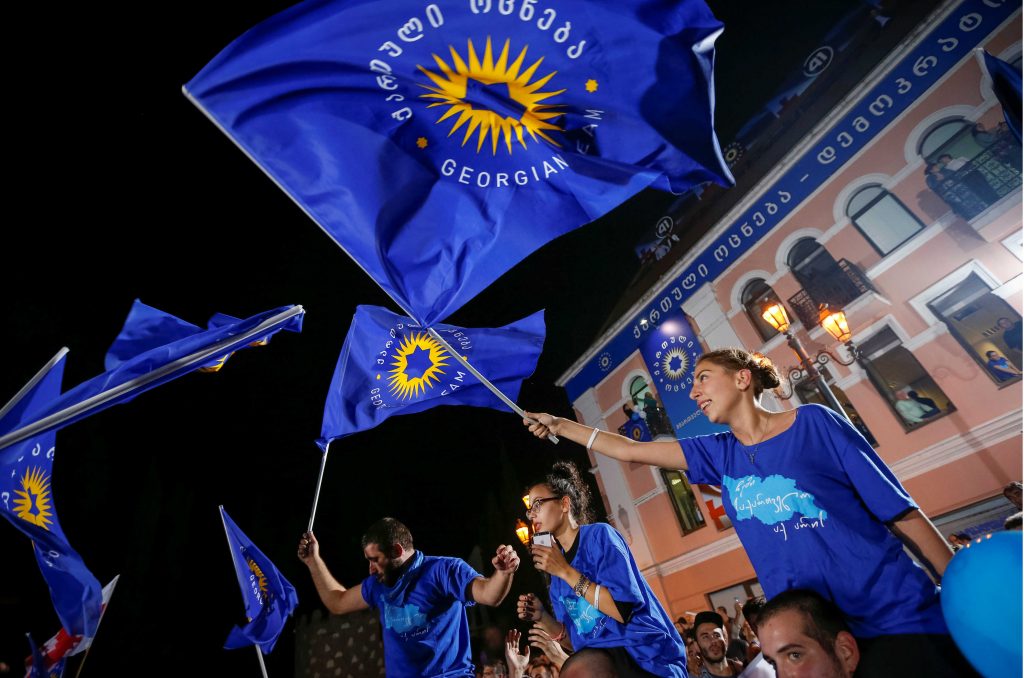 On November 11, Mikheil Saakashvili stole the show again. After resigning from his post as regional governor of Odesa oblast in Ukraine, he vowed to build a new political party and called for early parliamentary elections there. While Saakashvili dominates the news cycle and pundits continue to examine his every move, it’s worth taking a closer look at his home country of Georgia and its recent elections, where the former president still plays an outsized role.

On October 30, Georgia’s ruling party Georgian Dream scored a decisive victory in the second round of voting, securing enough seats to change the constitution and pass legislation easily. Georgian Dream won 115 of the 150 seats, while the United National Movement won twenty-seven, the Alliance of Patriots ended up with six, and the Industrialists-Our Homeland bloc got one. Independent candidate Salome Zourabichvili was also elected.

These results require sustained attention, especially given Georgia’s recent history of abuse of power from both the United National Movement and Georgian Dream. At the same time, the constitutional majority may be a chance for positive changes: It could enable a responsible and forward-looking government to undertake badly needed reforms.

The 2016 elections were probably the best Georgia has ever had. They were assessed by local and international monitoring organizations as democratic and representing the will of the people with a small handful of isolated incidents notwithstanding. The pre-election period was also positive; the country’s political parties had unhindered access to the media, and the public had an opportunity to listen to all viewpoints. Overall, the country is moving forward and the quality of our democracy is improving.

Still, the elections were not without their problems. First, Saakashvili and Ivanishvili still dominate Georgian politics, although neither was on the ballot. Both maintain informal influence over their parties. Georgia has yet to overcome the domination of these larger-than-life personalities in politics. Second, around half of the population does not like any of the parties and refused to vote. It is a clear sign that people expect more from the government and the constitutional majority may be an opportunity to respond. Third, a substantial number of pro-Western politicians could not make it into parliament and many either gave up, broke with their parties, or joined the ranks of the triumphant Georgian Dream. This means that these party’s internal systems and ideologies were not strong enough for parties to survive after failing in elections. Fourth, for the first time in the modern history of Georgia, the Alliance of Patriots, a party which is perceived as pro-Russian with an anti-Western, xenophobic, and homophobic agenda, will be represented in parliament. From the point of view of democracy and pluralism this is good, as it reflects the will of the people, but on an emotional level, it is a bitter pill to swallow for a country whose territories are occupied by Russia and where a majority want to join Europe.

Now that the Alliance of Patriots will be in parliament, confronting Russia’s influence in Georgia may require more effort. Russia’s soft power has become more visible in Georgia over the past few years and the new government needs to counter it. More NGOs and media outlets are openly involved in spreading pro-Russian propaganda. These groups have been extremely active in the regions, for the last several years and there has not been a single case of the security services scrutinizing their funding.

In spite of these drawbacks, Georgia should still be regarded as a standout country in the broader region. It has committed itself to integration with the West and has taken multiple steps toward that goal.

Yet there are reasons to question Georgian Dream’s foreign policy orientation. It supports Georgia’s Euro-Atlantic aspirations, but no one knows its concrete plans: Will it talk openly with its Western partners about closer cooperation, including an EU membership perspective, or will it continue its polite conversations with the West while trying to please Russian interests by sustaining semi-official bilateral negotiations?

The Georgian government should be bolder in requesting a faster path toward Euro-Atlantic integration, demanding something more ambitious on the table (even start openly discussing a membership perspective), and should limit its interactions with Russia. Doing so would not only be a clear signal to the population, the West, and Georgia’s adversaries, but would also limit the government’s ability to deviate from a democratic path and prevent any radical swings in foreign policy.

There are forces in Georgia and Russia advocating closer ties between the two and they try to advance these relations through an array of activities, such as the recently announced Russia-Georgia business forum or a visit of the Patriarch of the Georgian Orthodox Church to Russia. But it is crucial for the government to acknowledge that Russia is the greatest danger to Georgian democracy and poses a direct threat to its neighbors and the West.

Georgia has shown that its democracy is the most advanced in the wider region and this should be acknowledged. Tbilisi deserves more attention from its Western partners and more specific deliverables that could trickle down to ordinary Georgians. Georgia’s prospective membership in both the EU and NATO should become discussion points. The government should appeal for swifter integration with the West more forcefully. In response, the West should open doors more quickly. This would be a fair response to the strong pro-Western stance the country has taken, and it would safeguard the quality of Georgia’s democracy once and for all.