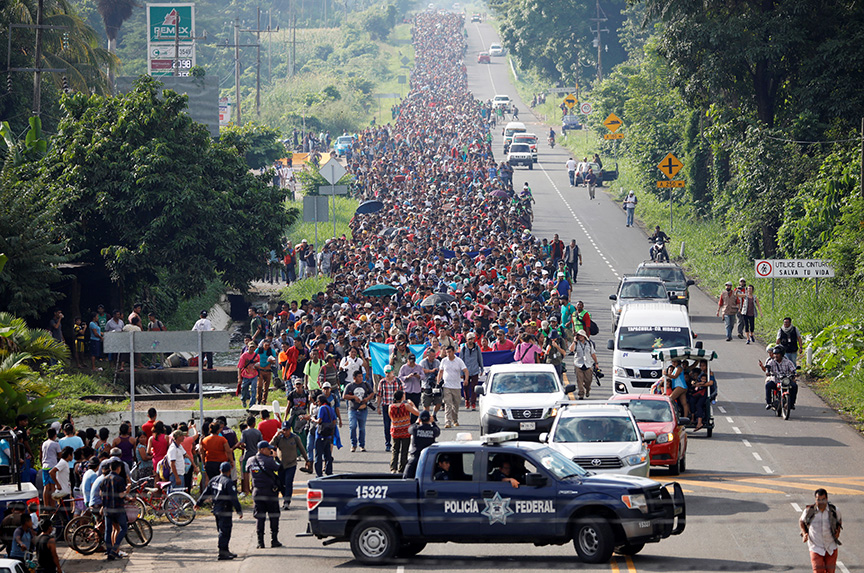 The Trump administration is expected to deploy at least 800 troops to the US-Mexico border in response to a caravan of an estimated 5,000 migrants from Central America that is heading north.

In an October 25 tweet, US President Donald J. Trump wrote that he is “bringing out the military for this National Emergency. They will be stopped!”

Trump has earlier warned this “caravan” of migrants not to enter the United States. In a tweet on October 22, he claimed that “criminals and unknown Middle Easterners are mixed in.”

The president also threatened to cut off, or substantially reduce, aid provided to the countries of the Northern Triangle—Guatemala, El Salvador, and Honduras—which are the chief source of these migrants.

On May 4, 2017, John Kelly, White House chief of staff who at the time was serving as secretary of homeland security, said at the Atlantic Council that he had told Trump that in his view, the job of securing the United States’ southwest border “begins 1,500 miles south.”

A report from the Northern Triangle Security and Economic Opportunity Task Force of the Atlantic Council’s Adrienne Arsht Latin America Center offers proposals on how the United States and the three Northern Triangle countries can jointly address long-standing regional challenges. Its recommendations are focused in the areas of rule of law, security, and sustainable economic development.

Jason Marczak, director of the Atlantic Council’s Adrienne Arsht Latin America Center, brings us up to speed on the crisis in an interview with the New Atlanticist’s Ashish Kumar Sen. Here are excerpts from the interview.

Q: Why are so many people fleeing the Northern Triangle?

Marczak: People are fleeing the Northern Triangle, Honduras specifically, because the conditions there give them no other alternative but to leave. Most people, if given a choice, would rather stay with their families, communities, or hometowns. But a combination of violence and economic desperation in these communities leaves them with little alternative but to leave.

Q: What is the situation in Honduras?

Marczak: Honduras is one of the most dangerous countries in the world. The homicide rate in Honduras has decreased in the last couple of years, but the situation remains incredibly difficult. There are communities that are off limits to the state and are essentially run by gangs.

At the same time, the Honduran economy continues to suffer as it has for several years.

It is this combination of economic as well as security conditions that is the key primary determinant of the Honduran people’s decision to come north.

This type of mass migration from Central America is something we have really seen escalate in the last ten years. It’s due to a lack of improvement of conditions in the countries themselves.

Q: Why are the migrants traveling in caravans?

Marczak: The reason they are leaving in caravans is because the journey is very dangerous. Criminal elements and gangs consistently target migrants that head north. Traveling in large groups is a tactic to protect people from those who prey on migrants.

Q: Is there a criminal element to these caravans?

Marczak: It’s difficult to say who is in the caravan. But, based on previous migration flows, the people who are leaving and coming north are people who are forced to flee because they fear for their lives if they stay. Some, of course, come for economic reasons.

Q: What are the trends as far as the number of migrants coming north?

Marczak: The crisis of unauthorized migrants heading toward the United States really became an issue of US national conscience about four years ago when we had tens of thousands of unaccompanied migrant children coming to the United States. The images of young children clutching teddy bears arriving at the US border was really something that awoke the national conscience.

We have seen increases in unauthorized migration from Central America over the last decade, but it is really over the last five years that the issue has risen to one of national attention.

Q: What is the United States doing to address this challenge?

It is important to take into account that the underlying conditions that are forcing people to leave have been endemic in these countries for decades. Fixing them will take a committed, multi-pronged, multiyear strategy.

Image: Central American migrants walked along the highway near the border with Guatemala in Tapachula, Mexico, on October 21. They are attempting to reach the United States. (Reuters/Ueslei Marcelino)