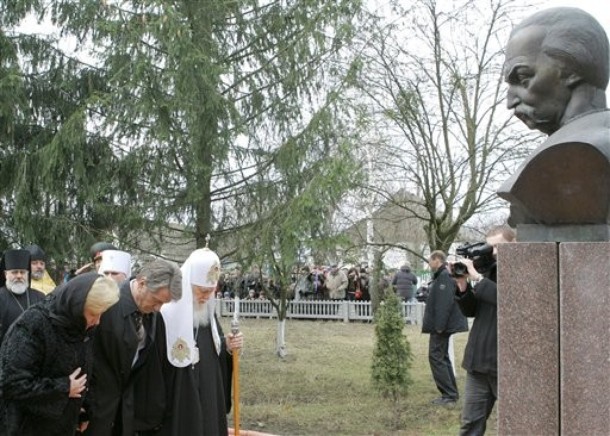 Lord Byron, Pushkin, and Victor Hugo wrote poems about him. Liszt composed a symphonic work in his honor, Tchaikovsky devoted an opera to him, and Gericault painted him tied naked to a horse. In centuries past he was a historical superstar — a poster child for the Romantic era.

His name was Ivan Mazepa, a Ukrainian Cossack chieftain who allied with Sweden’s Charles XII to fight Russia’s Czar Peter the Great at the Battle of Poltava, 300 years ago this week.

The swashbuckling subject of Romantic-era adulation is once again attracting attention, this time as the subject of a dispute over history between the leaders of Russia and Ukraine. In the eyes of the Russian state and its propagandists, Mazepa is Public Enemy No. 1 — a turncoat who betrayed Peter the Great, Orthodox Christianity and the unity of Slavic peoples. Most Russian historians have judged Mazepa a traitor. Acting under the instruction of Czar Peter, the Russian Orthodox Church excommunicated him and placed an anathema on him, and still vilifies him in annual Poltava services. In turn, many Ukrainian historians regard Mazepa as an honored fighter for Ukraine’s statehood. President Viktor Yushchenko extols Mazepa as a heroic precursor of Ukraine’s independence and his image is emblazoned on the 10 hryvnia note ($1.30).

Passions over Mazepa have not been as heated in three centuries as this year. In recent days, amid ceremonies, costumed reenactments, conferences and television programs on the Poltava battle, Russian demonstrators have burned him in effigy. Ukrainian patriots rallied in Poltava on June 27 and unfurled a 30-meter by 45-meter Ukrainian flag in his honor. And a security force of nearly 1,000 has been deployed in Poltava and successfully staved off conflicts between the two sides.

On the surface, there is little in Mazepa’s biography that would warrant such intense feelings. He was born to a prosperous and educated family in Polish-occupied Ukraine in 1639 and served in the Polish court until 1665, when he returned to Ukraine, eventually joining the ranks of the Cossacks loyal to the Polish crown. In 1687, Mazepa was elected Hetman, or chieftain, of the Cossack Host in eastern Ukraine that was loyal to the Muscovite Czar. A prosperous magnate, Mazepa built churches and supported the arts and education while pursuing the goal of uniting all Ukrainian lands in a Cossack state. After years of partnership with Peter the Great, Mazepa sensed Russia’s growing ambitions were a threat to Ukraine’s sovereignty. He abruptly turned against Peter and in 1709 joined Sweden’s young king, Charles XII, in a campaign against Russia. The Swedish-Ukrainian alliance suffered a crushing defeat at Poltava. Charles died from a battle wound and Mazepa fled to today’s Moldova, where he also died soon after.

Poltava helped shape Europe’s geopolitics for three centuries. Russia’s emphatic rout of Sweden and its Cossack allies signaled its emergence as a European superpower and ensured Russian dominion over Eastern Ukraine for the bulk of three centuries. Peter constructed a new narrative for his realm. Instead of being Muscovy, it was to be Russia. As such, he and his state could claim lineage with the Kievan state called Rus that had accepted Christianity in 988 and collapsed in the 13th century. In one simple historical revision that complemented his opening to the West, Peter and his realm would be transformed from Asiatic upstarts to a European empire. Kiev would become the “mother of all Russian cities.”

There was, of course, no place in this scheme for anything resembling an independent or autonomous Ukraine. Indeed, any claim to Kiev’s autonomy or separate nationality, any Ukraine-based opposition to Russian rule, was a direct threat to the Petrine myth and the legitimacy that it helped confer on the Russian state. Mazepa had to go, and has never been allowed to return to historical grace for the same reason. Every Russian ruler has vilified him since the fateful battle at Poltava.

For Russians, Poltava without question was a great historical victory and Russians should be free to memorialize it as such. And there is no question that in the 17th century, national identities were ill-formed and many inhabitants of the territory of Ukraine felt a stronger kinship for the common Orthodox faith they shared with Russians than for any aim of independence. But for contemporary Ukrainians, there can be no similar ambivalence. As a young state that gained independence in 1991, Ukraine must develop its own sense of history, its own heroes and founding fathers. In short, it needs a common historical narrative to bind its citizens.

Such efforts are at best benign and should excite from Russia no more than a firmly agnostic ambivalence. But the vehemence of Russian polemics over events and personalities three centuries old speaks to the Russian state’s interest in keeping alive the idea of the eventual reunification of the two states. It also helps perpetuate a cultural divide between Ukraine’s Ukrainian-speaking west and the Russophone east.

In this context, there are several reasons why Poltava resonates. First, Mazepa and the Cossacks represent a political force that sought autonomy and independence from Russian dominion. Second, Mazepa not only turned against Russia, he made common cause with Sweden, i.e. with Europe and the West. Third, for politicians like Vladimir Putin who lionize the Russian empire and lament the disintegration of the Soviet Union, branding Mazepa a traitor sends a not-so-subtle message that proponents of Ukraine’s statehood today are also betraying the cause of Slavic unity.

With Russia adamantly opposed to Ukraine’s integration into European structures and with Mr. Putin on record as questioning the permanence of Ukraine’s statehood, Russia is investing significant resources on challenging Ukraine’s shaping of a separate national identity and history. These efforts include film documentaries challenging Ukraine’s effort to commemorate Stalin’s famine as a national genocide, and financing “Taras Bulba,” a big-budget epic film that depicts the Cossacks as loyal supporters of the Russian empire and adds scenes — absent in Gogol’s 19th century novel on which the movie is based — of Poles as murderous barbarians engaged in pillaging and rape.

While this Russian effort to upend Ukrainian national identity is not likely to succeed, over the short term it can help perpetuate Ukraine’s east-west divide, promoting instability and increasing Russia’s opportunities to reassert hegemony over its weak neighbor.

Until Ukraine can shape its historiography calmly and professionally without external interference, its polity will continue to be plagued by divisions and its society by lack of cohesion. This is why the contemporary battle over the meaning of Poltava is as significant as the Battle of Poltava was three centuries ago.

Adrian Karatnycky is a senior fellow with the Atlantic Council and Alex Motyl is professor of political science at Rutgers University in New Jersey.