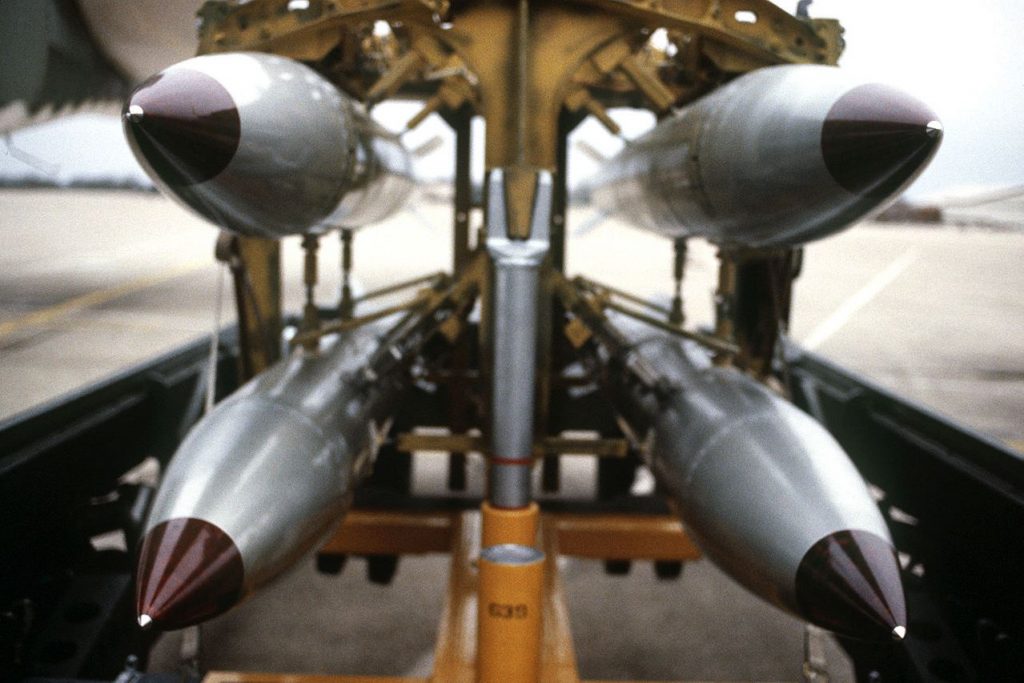 The US deploys 180 of its 200 B61 nuclear bombs in Europe, according to the Federation of American Scientists. After deploying more than 7,000 in Europe amid the Cold War, the US cut its residual B61 arsenal in Europe by more than half in the past decade. (US Defense Department/SSGT Phil Schmitten)

As NATO leaders prepare for their annual summit conference in two weeks, they should be ready to re-affirm the importance to the Alliance of nuclear weapons, including US nuclear warheads deployed in Europe, several Atlantic Council analysts say in two new essays.

Three Atlantic Council board directors who served as top presidential advisers on security and nuclear issues wrote this week in the Washington Post that a re-affirmation of NATO’s commitment is essential because of a recent debate calling “for the United States to unilaterally withdraw its small arsenal” of nuclear bombs from Europe. Such debates, among US and European security specialists, have included suggestions that US warheads and delivery systems in Europe are outdated, or that they may not need forward deployment in Europe because NATO’s European members can rely on the protection of US-based strategic nuclear weapons.

Nuclear weapons remain essential to NATO’s arsenal in Europe partly because “they are, fundamentally, political weapons” that provide “a visible symbol to friend and potential foe of the US commitment” to defend allies with all of its resources, the three Council directors write. The importance of that symbolism is illustrated by the support among newer, Eastern European members of NATO for keeping the weapons in Europe. That concern has been heightened by Russia’s attacks this year on Ukraine and current threats against Moldova and Georgia, as well as “exercises simulating nuclear strikes on Poland and the Baltic states,” they write.

The case is made more broadly in a new Atlantic Council Issue Brief, “Why Nuclear Deterrence Still Matters to NATO,” by the Atlantic Council’s secretary, Walter Slocombe, a former US undersecretary of defense, and Matthew Kroenig, a nonresident senior fellow at the Council’s Brent Scowcroft Center on International Security.

“In the two decades following the end of the Cold War, tensions between Europe and Russia were reduced and this led to a corresponding diminution in the importance of nuclear forces in political and military affairs,” Kroenig and Slocombe write in the brief.

Both articles note developments far beyond Russia in making their case for the continued importance of NATO’s nuclear deterrent. While the United States has reduced its nuclear arsenal since President Barack Obama’s 2009 speech in Prague, virtually all other nuclear-armed states have continued to build and modernize their nuclear forces, they note.

Signfiicantly, Slocombe and Kroenig write, even if negotiations with Iran to prevent its development of nuclear weapons are successful, “Iran will continue to pose a potential nuclear threat to NATO because Tehran will always have the option of renouncing those agreements, either openly or clandestinely, and reconstituting its program.”