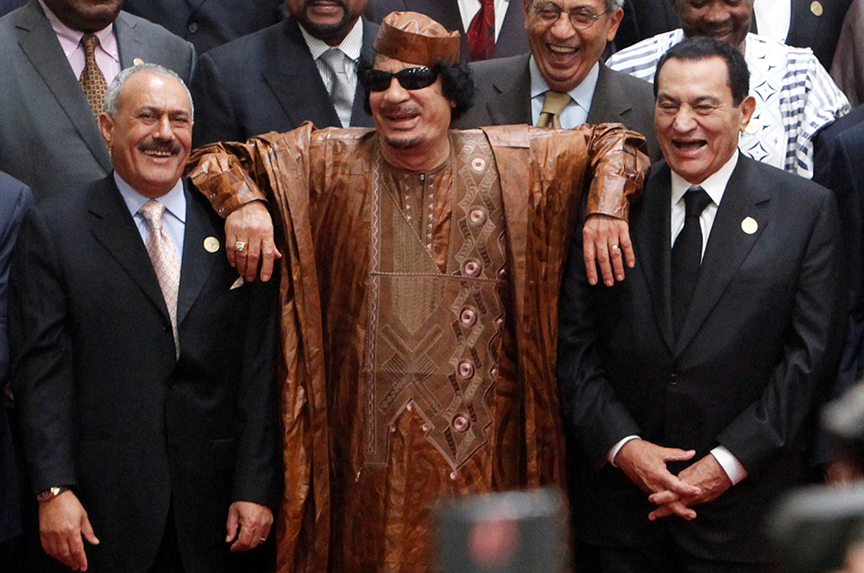 US National Security Advisor John Bolton infuriated North Korea by suggesting that Libya’s experience with denuclearization could serve as a model for Pyongyang to give up its nuclear weapons. The comment sparked swift condemnation from North Korean officials.

That Libyan leader Moammar Gadhafi, who in 2003 made the deal to give up his weapons of mass destruction capabilities, was toppled in an uprising eight years later and killed by his captors is an important fact that has weighed on the minds of the North Koreans as they consider the fate of their own nuclear weapons program.

In light of this concern, Bolton’s comment has thrown into doubt the prospects of a much-anticipated summit between North Korean leader Kim Jong-un and US President Donald J. Trump in Singapore on June 12.

In an interview with the New Atlanticst, Karim Mezran, a resident senior fellow in the Atlantic Council’s Rafik Hariri Center for the Middle East, discussed why comparing Libya to North Korea is like comparing apples to oranges. Here are excerpts from that interview.

Q: What is the Libya model mentioned by John Bolton?

Mezran: It is the idea that a strong power like the United States can pressure the leadership of another country to give up its weapons of mass destruction, which includes nuclear capabilities, in exchange for something that is of interest to that leader in question.

In Libya, Gadhafi was under pressure from sanctions and embargoes because of his support for terrorists. In the late 1990s, he realized that he needed a strong opening to resolve economic issues and other challenges that could threaten his regime.

In 2003, the Americans invaded Iraq to get Saddam Hussein’s alleged stockpile of weapons of mass destruction. They couldn’t leave another rogue state with known and viable chemical weapons.

Secret negotiations were undertaken by the Gadhafi regime and US and British envoys in 2003. The Americans created for Gadhafi a successful bargain: giving up all of his weapons of mass destruction, especially his nuclear program, in exchange for lifting of sanctions and the full political and economic reintegration of Libya into the international community.

Q: What was the extent of Gadhafi’s nuclear stockpile?

Mezran: It was zero. Gadhafi’s nuclear program was very basic. This was not so for his chemical weapons. He had stockpiles of mustard gas.

Gadhafi, as we discovered after the fall of his regime, gave up only half of his stockpile of chemical weapons.

Q: How successful was the Libya model?

Mezran: The Libya model was successful for Gadhafi. It’s hard to say whether it would have been more convenient for Gadhafi to keep his nuclear program because he may have ended up meeting the same fate as Saddam Hussein. He was smart in using the little leverage he had with the West.

Q: Does the fact that his regime was toppled and Gadhafi himself killed by rebels serve as a cautionary tale for other leaders who are considering giving up their nukes?

Mezran: It’s hard to say whether NATO would have bombed Libya if Gadhafi had a nuclear bomb. The fact is he knew that he could not develop a nuclear weapon, but he used it as a way to secure his integration into the international community. Is there a direct connection between the success of the [Libyan] revolution, the NATO bombing, and Gadhafi giving up his nuclear capabilities? I really don’t see it.

Mezran: North Korea has a well-established nuclear program that is intended to protect the country; they have a powerful ally in the Chinese which allows them the needs that isolation can prevent them from having. Libya didn’t have anybody. Libya was really isolated.

It is not correct to say that if we act with North Korea the way we acted with Libya it will succeed. These are two very different realities. North Korea has also shown that with Chinese support it can resist international sanctions. Libya, on the other hand, was exhausted by the sanctions.

Karim Mezran is a resident senior fellow in the Atlantic Council’s Rafik Hariri Center for the Middle East. Follow him on Twitter @MezranK.

Image: Then Libyan leader Moammar Gadhafi (center) leaned on the shoulders of then Egyptian President Hosni Mubarak (right) and then Yemeni President Ali Abdullah Saleh (left) as they laughed during a photoshoot before the second Afro-Arab Summit in Sirte, Libya, on October 10, 2010. All three men were toppled in Arab Spring uprisings that erupted in 2011. (Reuters/Asmaa Waguih)