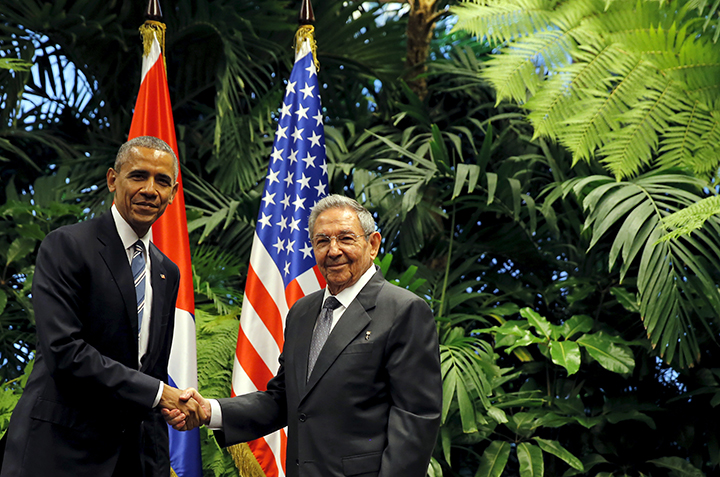 Obama administration has done almost all it can to loosen embargo, now the ball is in Congress’ court, say Atlantic Council analysts

US President Barack Obama and his Cuban counterpart, Raúl Castro, agree on at least one thing: the US trade and travel embargo on Cuba has to go. That is easier said than done.

In this highly charged election year, the current US Congress is unlikely to lift the embargo, according to two Latin America analysts at the Atlantic Council.

“To a large extent, the Obama administration has taken almost all of the measures that it could take in order to loosen, free up, and make null a lot of the important portions of the embargo,” said Peter Schechter, Director of the Atlantic Council’s Adrienne Arsht Latin America Center.

However, there are still some things that Congress can do.

“There is momentum for fully lifting travel restrictions,” said Jason Marczak, Director of the Latin America Economic Growth Initiative at the Adrienne Arsht Latin America Center. This would mean permitting US tourists to visit Cuba.

Congress could also lift restrictions on financing agricultural exports to Cuba, he added.

Obama arrived in Havana on March 20 becoming the first US President to visit Cuba since Calvin Coolidge made the trip in 1928. Obama met Castro on March 21 and was scheduled to meet dissidents and civil society leaders on March 22.

Peter Schechter and Jason Marczak spoke in an interview with the New Atlanticist’s Ashish Kumar Sen. Here are excerpts from our interview.

Q: What is the likelihood that the US Congress will lift the embargo on Cuba? Are there any parts of the embargo that can be lifted?

Schechter: There is very little chance that the Congress will lift the trade and travel embargo in what remains of this very contentious election year. To a large extent, the Obama administration has taken almost all of the measures that it could take in order to loosen, free up, and make null a lot of the important portions of the embargo. But there are some that just cannot be undone without congressional action and that is not going to happen this year.

Marczak: The embargo will not be lifted by this Congress. This Congress is focused on just keeping the lights on and not doing much beyond that. But there are certain opportunities for  Congress to eventually chip away at the embargo. There is momentum for fully lifting travel restrictions. President Obama announced in additional executive actions last week that people can go to Cuba on an individual basis, so travel has been expanded as far as it can be by executive action. But only Congress can allow for tourism to Cuba, which is currently prohibited by the embargo.

Q: Are there steps the Cuban government can take to facilitate the lifting of the trade embargo?

Schechter: If the Cuban government suddenly got religion and defended democracy, upheld human rights, and liberated political prisoners, I am sure that many Republicans would agree to undo the embargo. But let’s be honest, that is not going to happen. Cuba is an authoritarian state and it has shown itself to be very unwilling to take any actions that it feels would undo the Communist Party’s hegemony in Cuba. We have relations with lots of countries that are just like that. Vietnam is our foremost ally in Southeast Asia and it, too, is an authoritarian state with a Communist government.

Where the work needs to be done is in continuing to prod the Cubans to provide as many economic freedoms as possible. These are the freedom for a person to work where he wants and to gain an income so he can improve the lives of his family and buy a house. Those are freedoms that Cubans don’t have today, and I think that it is very important that we work on those freedoms as well. That doesn’t mean that we should abandon political freedoms because those are of the utmost importance, it only means that it is very, very critical to try to pry as much from the Cuban government as possible, and I suspect it will be more in the realm of economics than political freedoms in the near term.

Marczak: The Cuban government could provide for greater human rights and political liberties for its people. That would give momentum to lifting the embargo. It would help to counter the message of those who say that only the embargo is the right policy to promote greater liberties. But I am not sure that the Cuban government wants the embargo to be lifted. President Castro called on the US Congress to once again lift the embargo in the press conference with President Obama, but the embargo is the gift that keeps on giving to the Castro regime. It is their crutch and answer to why they are unable to manage their economy and to why they are consistently facing shortages. The embargo has been for fifty years the answer to all of the problems in Cuba. Once you take away the embargo, the Cuban government loses the ability to have an outside force to blame for its own economic ills.

Q: What are your thoughts on President Castro’s implication that Cuba does not have political prisoners, and that he would release any if he is given a list?

Schechter: There are numerous human rights organizations that would disagree with that. Only yesterday, a number of dissidents were arrested—many were released very quickly—in a show of force, including some of the leaders of the Ladies in White.  I think President Castro is being less than perfectly honest when he says there are no political prisoners.

What has happened is that the Cuban government has shifted its tactics with regards to political prisoners. Rather than holding them for long-term detentions, they have moved toward a catch- and-release policy. People are brought in for questioning, intimidated, and let out in a couple of hours. The point of that is to intimidate any dissenters.

Q: What implications could President Obama’s visit to Cuba have for President Castro?

Schechter: There are three main implications: symbolic, political, and economic.

For fifty years, the United States has had a regime change policy in Cuba. That policy has not worked. Now the President of the United States has recognized the Cuban government through new diplomatic relations and has visited the President of Cuba whose name remains Castro. This is an enormous political victory for a government of a relatively small country that has made a name for itself in resisting what in hindsight turned out to be a very misguided policy of regime change in Cuba. So from a symbolic point of view it is very important for Castro.

From a political point of view, Obama’s visit strengthens the reformers in Cuba. This is very, very important. Like any government, but particularly an authoritarian one, the Castro government is far from monolithic. Hardliners and reformers coexist in an often very tense kabuki dance. What we have here is an opportunity for reformers to take the upper hand in the upcoming meeting of the Communist Party of Cuba, which will take place in April, and hopefully lock in some of the reforms that continue to be missing from the panoply of things that need to be done in Cuba.

On the economic front, the island is in very difficult economic shape. That private sector has to be strengthened. Clearly trade and investment with and from the United States is going to be an opportunity for the private sector.

The Obama administration has already taken many measures that will help the Cuban people economically, without necessarily helping the Cuban government. The Cuban leaders know that if they don’t improve the economic situation there will be increasing and everyday more widespread dissatisfaction with the government.

Marczak: I think President Castro might be surprised by the reverberation created across Cuban society by President Obama’s trip. Just watching the press conference this afternoon, it was revolutionary to see President Castro responding to questions from the media. He was clearly uncomfortable when pressed by media on political prisoners.

Image: US President Barack Obama and Cuba’s President, Raúl Castro, shake hands during a meeting on the second day of Mr. Obama’s visit to Cuba, in Havana on March 21. (Reuters/Carlos Barria)