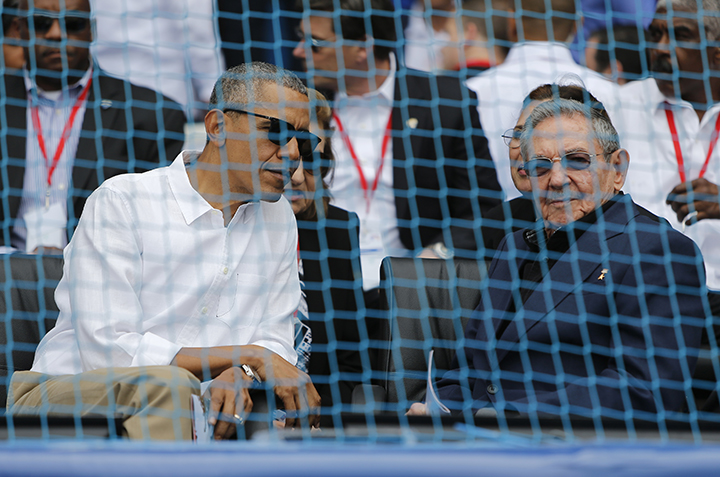 US President Barack Obama’s decision to end the “wet foot, dry foot” policy that allowed any Cuban migrant who reached US soil to stay in the country will slow the number of Cuban immigrants rushing to the United States, but is unlikely to deter US President-elect Donald Trump from reversing some of the recent progress in the bilateral relationship, according to two Atlantic Council Latin America analysts.

Trump has said that he will dismantle the progress made in the US-Cuba relationship—a progress marked by a historic diplomatic détente in the summer of 2015 and US President Barack Obama’s visit to Havana in March of 2016—unless he gets a better deal.

A wholesale reversal of the advancement in the bilateral relationship would give China unchallenged access to Cuba, said Jason Marczak, director of the Latin America Economic Growth Initiative at the Atlantic Council’s Adrienne Arsht Latin America Center.

“By disengaging from Cuba, what the administration would be doing is giving China a beachhead ninety miles off our shores,” he said.

Peter Schechter, director of the Atlantic Council’s Adrienne Arsht Latin America Center, said Trump should preserve an “overwhelming majority” of Obama’s initiatives, including diplomatic relations with Havana, the ability of Americans to travel to Cuba, and US airline and hotel investments in the island.

Ending the “wet foot, dry foot” policy puts the finishing touches on the Obama administration’s attempts to normalize the US relationship with Cuba. Obama reestablished diplomatic relations with Cuba in July of 2015, ending five decades of failed US policy. He then visited Havana in March of 2016.

In recent years, Cubans have come to the United States in record numbers taking advantage of the twenty-two-year-old “wet foot, dry foot” policy. Along with the Cuban Adjustment Act, the policy has allowed Cubans who reach US territory to get permanent residency and green cards after they’ve been in the United States for a year and a day.

The White House announced on January 12 that it had also ended the Cuban Medical Professional Parole Program, which gave preferential treatment to Cuban medical professionals who want to come to the United States.

“By taking this step, we are treating Cuban migrants the same way we treat migrants from other countries,” US President Barack Obama said in a statement.

However, an immigration lottery that allows at least 20,000 Cubans to emigrate to the United States legally each year remains in effect as does the Cuban family reunification program, which allows legal residents in the United States to apply for relatives to join them.

“In a way, I wish President Obama would have done it earlier,” Schechter said, referring to the end of the “wet foot, dry foot” policy.

Commenting on the timing of the White House decision, Marczak said that for political reasons, “it would have been very difficult for Obama to put forward this policy prior to the elections because in Miami, whether you are a Cuban who favors more engagement or favors hardline policies you generally favor the special status that Cubans get.”

As a result, announcing this policy change before the election on November 8 could have cost the Democrats additional votes in Florida, he added. Hillary Clinton, the Democratic presidential nominee, lost Florida and the election.

Peter Schechter and Jason Marczak spoke in an interview with the New Atlanticist’s Ashish Kumar Sen. Here are excerpts from our interview.

Q: What are your thoughts on the Obama administration’s decision to end the “wet foot, dry foot” policy?

Schechter: I wish President Obama would have done it earlier. This policy is an anachronism that is part of the anachronism of the Cuba embargo. It dates back to a Cold War era where we were, for political reasons, accepting Cubans because they were refugees from an authoritarian regime. We have to ask ourselves today, what is the difference between Cubans and Venezuelans who are also living under an authoritarian regime, which is foisting hurricane-like difficulties on them? What is the difference between Cubans and Hondurans or Salvadorans? We must decide if we want to open our country up to people suffering hardships everywhere:  this means Syrians, Hondurans, or Cubans must be treated equally.

Marczak: The sweet spot between November and January of this year was the time to implement this change. For political reasons, it would have been very difficult for Obama to put forward this policy prior to the elections because in Miami, whether you are a Cuban who favors more engagement or hardline policies you generally favor the special status that Cubans get. Putting this policy before the election could have lost additional votes for the Democrats in Florida.

The wet foot, dry foot policy came about in the mid-1990s. The Clinton administration at the time agreed to change policy so that those caught at sea would be sent back to Cuba and those who physically could come to US soil would be able to stay. But it is a policy that runs completely contrary to the normalization of the relations that we have seen with Cuba over the past two years.

It is also a policy change that would be very difficult for the incoming Trump administration to reverse. Even though the next administration has stated its desire to review all the executive orders with regard to Cuba and there are many who are coming into the administration who favor a tougher approach with Cuba, the now previous immigration policy encouraged an unorderly migration flow; it encouraged chaos at the borders; it encouraged chaos on the shores of South Florida. The policy put in place now fosters a more orderly migration, it discourages Cubans from trying to make the boat trip across the Florida Straits or from going to Ecuador or Central America and trying to enter the United States through the southern border. We have seen a dramatic increase in the number of Cubans presenting themselves at the US border over the last couple of years; over 50,000 just last year. This policy change will put a lid on Cuban migration as we enter into a new administration that has reducing migration as one of its flagship goals.

Q: Why would an earlier announcement of this policy change have hurt Democrats any more in Florida than the normalization of the US-Cuba relationship?

Marczak: You are going to find more Cuban-Americans, even those in favor of normalization, who support the wet foot, dry foot policy because it is the only group in the world that gets that kind of special status.

Schechter: The fact is that Miami-Dade County and Broward County, which the overwhelming majority of Cubans live in, have now repeatedly voted Democratic. The anti-normalization Cubans are losing their majority. There is a counterintuitive angle to this that each new Cuban that arrives here is actually a probable Democratic voter because these are mostly not political refugees, but rather economic refugees similar to other Latin Americans seeking better economic opportunities. These new Cuban refugees often turn into Democratic voters and not Republican voters. There will certainly be voices against Obama for making this [policy change], but it will be interesting to see just how long and how loud those voices will scream.

Q: As Donald Trump prepares to take office, does the “wet foot, dry foot” policy change—tackling immigration as it does—safeguard the progress made in the US-Cuba relationship under President Obama?

Schechter: I would hope that President Trump will keep the progress—perhaps he will roll back a couple of things symbolically—but I would hope that he will keep a majority of things, including diplomatic relations, the ability for Americans to travel, the ability of American airlines and hotel companies to preserve the investments they have already made in Cuba. I would hope that upon reflection, the overwhelming majority of the decisions made by the Obama administration are preserved.  It is important for US relations with both Cuba and the rest of the region.

Marczak: The Trump administration is likely going to reverse some of our Cuba policies, but the result of a wholesale reversal will be that you are disengaging the United States from Cuba and are opening Cuba to unfettered access by any other country but the United States. And who has some of the largest interest in Cuba right now? It’s the Chinese.

President-elect Trump has voiced a number of concerns about the Chinese economy and the Chinese military. By disengaging from Cuba, what the administration would be doing is giving China a beachhead ninety miles off our shores. That is something very important for the next administration to consider.

Q: What impact did the wet foot, dry foot policy have on the Cuban government?

Schechter: It is a policy that encouraged a brain drain in Cuba. Of course, the Cuban government hates it. Any country would hate it. That a neighboring country specifically targets a country to extract the best and brightest—it is a highly aggressive policy. Ending this does not mean that we love the Cuba government or that we should be friends with Raúl Castro or that we cease working for greater freedoms in Cuba. It only means we are ending a policy that is seen by other Latin Americans as a policy as profoundly unfair.

Marczak: The Cuban government detests the policy. It has been working closely with the [Obama] administration to reverse it. This is why the Cuban government is now accepting nearly 3,000 [Cuban] criminals that were in the United States for decades as part of the deal to reverse wet foot, dry foot.

Marczak: The Cuban government has said it will increase the amount of time that it will allow Cuban migrants to return home. It used to be two years, now it will be four years. Cubans who have been in transit for a number of years can go back to Cuba.

The policy will significantly diminish the number of Cubans who are trying to come to the United States because they are now going to be treated like any other migrant group when they show up at the US border.