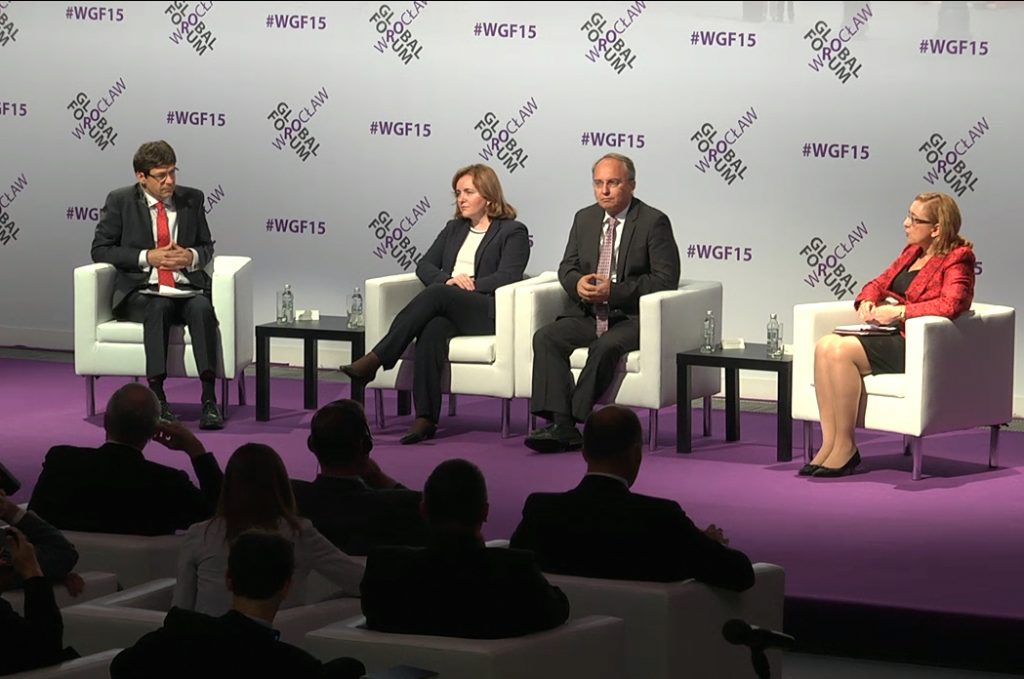 While the world focuses its attention on the Ukraine crisis, Russia has been quietly grabbing territory from another neighbor—Georgia.

The Kremlin’s aggression against Ukraine is just the latest provocation by Russia in its neighborhood, Georgia’s Foreign Minister, Tamar Beruchashvili, reminded an audience June 12, pointing out that Russian forces invaded her country in the summer of 2008.

“Unfortunately, at that time the West was not really able to well assess the whole danger of the situation and gave a green light to Russia to go ahead,” Beruchashvili said at the Atlantic Council’s Wrocław Global Forum in Wrocław, Poland.

Georgia lost 20 percent of its territory in the war. The conflict centered on two breakaway provinces—South Ossetia and Abkhazia—that are supported by Russia, which now is reportedly taking control of those provinces.

Russian President Vladimir Putin, whose forces annexed Ukraine’s Crimea in March 2014, has signed treaties with South Ossetia and Abkhazia that give Moscow control over their defense as well as their borders.

Beruchashvili described these treaties as a “real step towards annexation of Georgian territories that send [a] very alarming signal and have a parallel with the annexation of Crimea.”

Recent treaties between Russia and Georgia’s breakaway provinces of South Ossetia and Abkhazia are a “real step towards annexation of Georgian territories that send [a] very alarming signal and have a parallel with the annexation of Crimea,” said Georgia’s Foreign Minister, Tamar Beruchashvili.

“Do not forget about us,” she said.

“The illegal stationing of Russian military formations on the territory of my country is a clear violation of the constitution of the Republic of Moldova,” said Moldova’s Foreign Minister, Natalia Gherman.

In 2014, the EU deepened political and economic ties with the Georgia, Moldova, and Ukraine by signing association agreements with all three countries. The move was met with consternation in Moscow.

Georgia and Moldova are part of the EU’s Eastern Partnership initiative. The four other ex-Soviet republics in that group are Armenia, Azerbaijan, Belarus, and Ukraine.

Zaborowski asked Beruchashvili whether she felt let down by the Riga summit.

“We have no luxury to be disappointed,” she said. “We are using the transformative power of European integration to transform our country. We see that as a master plan for Europeanization of Georgia.”

She said her country has undertaken reforms “not to report to Brussels about homework, but it’s about Georgia itself.”

However, she acknowledged that Georgians would have been “more happy” with a clear declaration at Riga about the future of the EU’s associated partners.

“Georgia irreversibly follows its European and euroatlantic choice,” said Beruchashvili. “This is the choice of the Georgian people. This is a civilizational choice, a choice of values… and nothing of this choice is regarding new dividing lines or returning back to Cold War Europe.”

NATO has stopped short of offering Georgia a Membership Action Plan (MAP)—a formal step toward membership. Beruchashvili said such an offer at NATO’s 2015 summit in Warsaw would be “the most natural development and evolution.”

Like Georgia, Moldova and Macedonia also want to join the EU.

“We see European integration as probably the best answer to if not all, then the majority, of problems the country is facing,” said Gherman.

Gherman described the visa liberalization as a joint success for the EU and Moldova, noting that more than half a million Moldovans have traveled visa-free in the EU over the past year.

“The practical effect of European integration … helps us reunify the country,” she said.

And once Transnistria implements the Deep and Comprehensive Free Trade Area (DCFTA)—which offers businesses access to the EU single market—it’ll have the same effect, she predicted. Thanks to DCFTA, the EU is now Moldova’s main trade partner.

“The more we deliver on the implementation of the commitments reflected in the Association Agreement, the more we will be definitely knocking at your door with the application for the candidate status, and with a willingness to start in the foreseeable future accession negotiations,” she said.

Zoran Jolevski, the Defense Minister of Macedonia, said his country faces the challenge of refugees from the war in Syria and foreign fighters.

Unlike Georgia and Moldova, Macedonia has been promised EU membership at some point in the future once it addresses certain issues. Macedonia has participated in the MAP with NATO since 1999.

Jolevski said he hopes Macedonia would get NATO membership at the alliance’s summit in Warsaw next year, despite opposition from neighboring Greece over a name dispute.

The Defense Minister said his country faces two main security threats: a flood of refugees from the war in Syria and “more than one hundred” foreign fighters from Macedonia and “more than 1,500” from the region who could return to their homelands.

Like Beruchashvili, Jolevski said Macedonia is undertaking reforms primarily for itself.

“It is important for our domestic purposes, but also for becoming members of those important organizations,” he said.