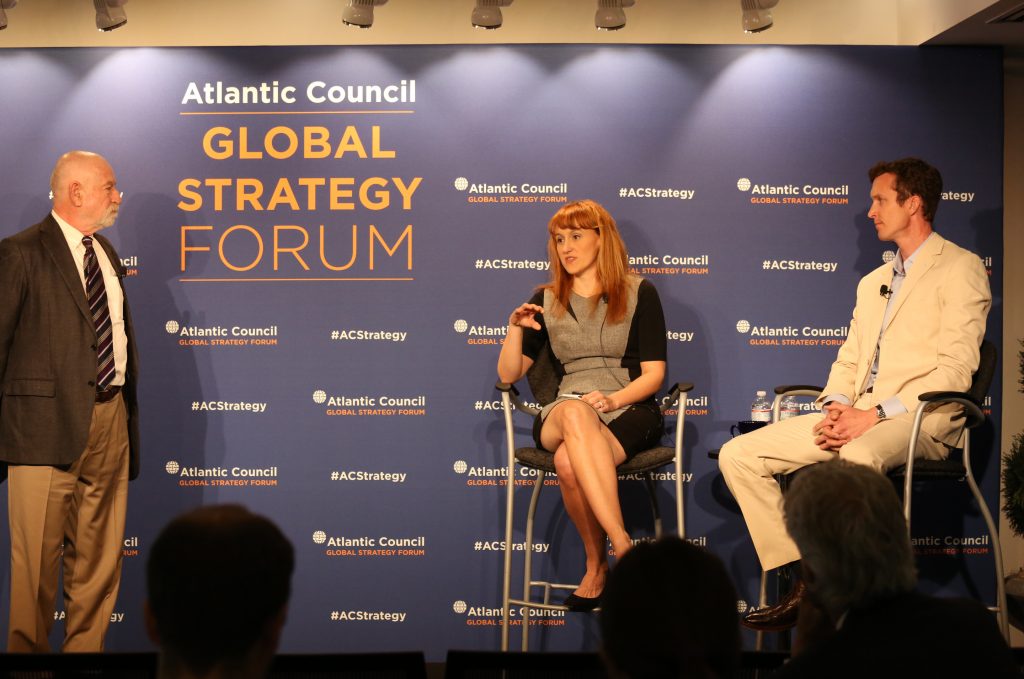 Do you care much about climate change? How about the fate of polar bears gingerly making their way across thinning Arctic ice? Most people would probably care a lot more if they heard how dramatic temperature spikes and rising sea levels would disrupt their own lives, panelists said April 29 at the Atlantic Council.

In discussions on the consequences of climate change, “the vast majority of what we are talking about are things that are down the road … Americans just don’t think that way,” said Heather Zichal, Senior Fellow at the Atlantic Council’s Global Energy Center. “They [want to know] ‘What’s happening in my backyard? How am I going to get my kids to school?’”

She added: “As much as you can localize the message, the better off you are. Nobody in Iowa is worried about polar bear habitats, but when it comes to growing seasons and extreme drought and extreme flooding, that is something that is on everybody’s radar.”
However, Zichal said getting the climate-change message across has become harder than ever because corporate special interests are “disrupting” the narrative by spending hundreds of millions of dollars to espouse the benefits of coal.

Joining Zichal at the podium was August Cole, Nonresident Senior Fellow and Director of the Art of Future Warfare Project at the Atlantic Council’s Brent Scowcroft Center on International Security. The two led a discussion on “Preventing Failures” on the first day of the two-day Global Strategy Forum in Washington. Peter Schwartz, Senior Vice President for Government Relations and Strategic Planning at Salesforce.com, moderated the panel that was hosted by the Council’s recently launched Strategy Initiative.

Cole said people react to storytelling differently than they do to PowerPoint and research reports.

“The power of narrative is to take really complex issues and to make them relatable at a human level and an emotional level,” he said. “That is overlooked, particularly around extremely charged issues.”

While the Washington debate on climate change and other key issues has become bogged down in partisan politics, it is in the realm of fiction—books, movies, and video games—that thinkers are exploring futuristic scenarios, some of them not entirely improbable.

In the movie The Day After Tomorrow, for example, global warming plunges Earth into a catastrophic new Ice Age. The 2004 disaster flick, starring Dennis Quaid and directed by Roland Emmerich, motivated people to think about climate change, said Schwartz.

Zichal, who served as US President Barack Obama’s top advisor on energy and climate change, said few conversations are taking place—either at the domestic or global level—on preparing for or mitigating the risks of climate change.

“That’s where we need to go with the discussion,” she said, adding that discussions at the White House on climate change barely scratch the surface. “I think we are really missing a huge opportunity.”

Obama has committed to reaching a strong climate agreement at the United Nations summit in Paris this December. Bolstering his efforts are a landmark US-China deal to cap carbon emissions, the European Union’s pledges to cut emissions, and commitments from Indian Prime Minister Narendra Modi to expand the use of renewable energy and from Mexico to cap its greenhouse gas emissions by 2026.

In the face of a bitter partisan divide on climate change, Obama has tried “fifteen different ways to work with Congress” on these issues and “he has no other choice but to use his existing regulatory authorities, and there isn’t a single one that he is not using,” said Zichal.

“[The administration has] left no stone unturned,” she added.

Zichal opened her remarks with a story about the remote Alaskan village of Shishmaref, where climate change is taking a real, and at times deadly, toll on the population. Hunters have died after falling through melting ice, homes are put on skids and frequently moved to higher ground to avoid the rising sea, and food traditionally stored in permafrost often goes bad as once-frozen ground warms up.

“We’re worried about efficiency standards for washing machines and we’ve got major, major problems with Arctic villages falling into the ocean,” said Zichal, pointing to a “huge disconnect” in Washington.

She said the climate agenda is a difficult one because of five reasons:

Despite this gloomy outlook, Zichal did list some bright spots, such as cheaper renewable energy and the prospect of an agreement on key emissions targets at the upcoming Paris conference.

The future of war

“There are certain trends taking shape around technology, particularly our reliance on it,” he said, noting that US military’s dependence on global positioning systems (GPS). “Future conflicts will hinge upon the ability to deny or preserve some of those systems.”

It takes a certain level of foresight to predict the nature of future challenges, including national security issues. That thinking is missing in Washington, said Cole, but not in Hollywood.

“Usually we don’t think too much in Washington beyond ten to fifteen years. Stories make policymakers pay attention,” said Cole, a former defense reporter for the Wall Street Journal. He added that fiction can highlight cyber vulnerabilities and other breakdowns long before they’ve actually occurred.

“When you think about systemic failure,” he concluded, “one of the worst kinds of failures is the failure of imagination.”