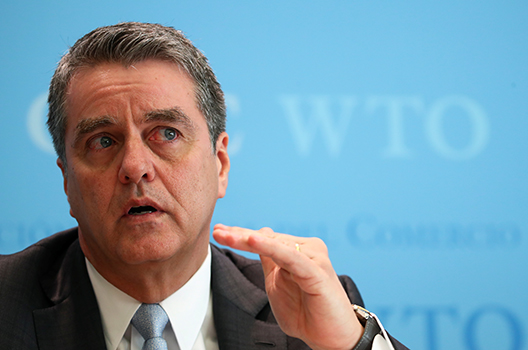 A landmark decision by the World Trade Organization (WTO) affirming it has jurisdiction to review trade measures taken by a member claiming national security exceptions to WTO rules has put the body in a bind as the United States argues that the WTO does not have this authority.

The European Union (EU), China, Canada, Turkey, and several other countries welcomed the ruling, which sets a potentially high bar for member states using national security grounds to avoid WTO rules. Many WTO members are concerned that abuse of these exceptions could undermine the multilateral rule-based trading system.

In contrast, the United States described the ruling as “seriously flawed,” according to the WTO summary—a potential warning not to use it as a precedent in dealing with the complaints against Washington’s own use of national security exemptions.

The EU and twenty-nine other countries have already filed complaints against the US use of national security exceptions to impose tariffs on steel and aluminum and possibly on cars and car parts. WTO Director-General Roberto Azevêdo has already set up a panel to look into this issue. Its findings could set up a clash with the United States.

Article XXI (b) of the 1994 General Agreement on Tariffs and Trade (GATT) states that the agreement “shall not prevent any contracting party from taking any action which it considers necessary for the protection of its essential security interests.” Subsections clarify that a member country can invoke this when (i) relating to fissionable nuclear materials; (ii) relating to the traffic in arms, ammunitions, and implements of war; and (iii) in times of war or other emergency in international relations.

On April 5, for the first time in WTO history, the organization clarified that measures taken by a member invoking Article XXI(b) are reviewable, and that the circumstances allowing those measures as laid out in subsections b(i), b(ii) and b(iii) are observable facts and can be formally judged by the Dispute Settlement Panel. In fact, the Dispute Settlement Panel determined that Russia had met the condition “in times of… emergency in international relations”—to impose a restriction on the transit of Ukrainian goods.

The United States takes a completely contrary view. It claims that the language of Article XXI(b) means that only the country taking the measure can judge if that is necessary to protect its essential security interests—or “self-judging.” Therefore, such measures are not subject to review by the Dispute Settlement Body.

In response to the Dispute Settlement Body’s decision, the United States argued that the body did not sufficiently consider Russia’s right to self-judge its national security needs. “The conclusions were premature and not consistent with the interpretation standards of the Dispute Settlement Understanding and customary principles of public international law,” , according to a WTO summary. The United States has used the same argument in cases filed in the WTO over its steel and aluminum tariffs.

The United States also criticized the Dispute Settlement Body for over-reach by offering “advisory opinions beyond its duty of fact finding,” according to the WTO summary, and making the case for Russia on what constitutes an “emergency” in international relations.

WTO in a lose-lose situation

Having clarified that it has jurisdiction to review national security exception cases, to the approval of many countries, the WTO now finds itself in a possible lose-lose situation. If it doesn’t rule against the United States’ self-judging argument, consistent with what it did vis-à-vis Russia, it would undermine its credibility, causing serious harm to the multilateral dispute settlement concept. This could possibly open a Pandora’s box and justify other members abusing national security grounds to put in place protectionist measures.

If it were to rule against the United States, however, possibly on both the principle that the WTO can review national security exception measures and on finding that the United States may not meet the national security conditions to justify imposing the tariffs, that would set up a major clash with Washington. Such a ruling would greatly aggravate the Trump administration’s sense of grievance against the WTO Appellate Body—for being over-reaching and encroaching on US national sovereignty. The United States would likely ignore any adverse rulings and continue to block any new appointment to the normally seven-strong Appellate Body. This would render that Body inoperative after December 10 when the term of two members expires, leaving only one remaining member, therefore not meeting the quorum of three needed to make decisions. Neither of these actions would be good for the WTO or the multilateral trading system. But it could be worse if US President Donald J. Trump acts on his threat to withdraw from the WTO altogether.

It’s important to realize that while the Trump administration has been most assertive in using the national sovereignty and security argument, US political leaders have long been leery of letting international bodies make rules that are binding on the United States. Indeed, in 1994, the just-expanded GATT faced serious difficulty in Congress precisely on the issue of the dispute settlement authority. Then Senate Majority Leader Robert Dole (R-KS) had to engineer a compromise deal with then US President Bill Clinton to help assure congressional approval of the agreement: a commission would be created to review the Dispute Settlement Body’s decisions with the intention of withdrawing from the WTO if it made three unreasonable rulings against the United States. Dole put it succinctly: “three strikes and we’re out.”

Twenty-five years on, a possible adverse WTO ruling against US tariffs on steel and aluminum might constitute a metaphorical third strike that could prompt Trump to make good on Dole’s remark.