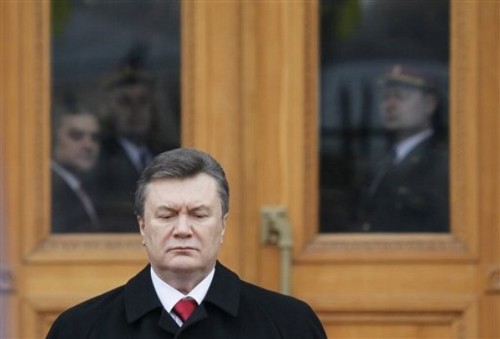 On Sept. 7, Ukraine’s parliament passed a law effectively depriving the inhabitants of Ukraine’s capital city, Kiev, of self-rule. According to the law, the executive functions of the city now belong to the so-called Kiev City State Administration. Who appoints the head of that body? The president. The parliamentary measure now gives Mr. Yanukovych control over the one city in Ukraine that has consistently voted against him, his party, and his cronies; that was the site of the Orange Revolution that disgraced him in 2004; and that has the country’s highest concentration of foreign diplomats, journalists, and business people. Mr. Yanukovych knows that he cannot control Ukraine without controlling Kiev. Now he does.

Controlling Ukrainians’ intellects is also key. On Sept. 8, the young historian Ruslan Zabily was interrogated by the Security Service for 14 hours. The alleged reason was Mr. Zabily’s supposed dissemination of state secrets. His real crime? Mr. Zabily studies the Holodomor (the deliberately engineered famine that took the lives of millions of Ukrainians in 1932-1933) as well as the Ukrainian nationalist resistance to Soviet rule in the post-World War II period. Both topics have been declared taboo by the Yanukovych government. In classic KGB style, the Security Service confiscated Mr. Zabiliy’s computer, suggested he think about the fate of his family, asked him about his foreign academic contacts, and initiated a criminal case against him.

Back in May, the rector of the Ukrainian Catholic University, Father Borys Gudziak, also received a cautionary visit from the Security Service. This Harvard-educated Ukrainian-American’s students don’t take kindly to strong-arm tactics, having helped defeat Mr. Yanukovych in the Orange Revolution in 2004 and having protested his moves since his inauguration in February. At the time Father Gudziak’s visit seemed like it could have been an isolated incident. Now, Mr. Zabily’s case suggests the crackdown on dissident academics has only just begun.

Let’s not forget the judiciary. On Sept. 9, three members of Ukraine’s Constitutional Court resigned. They just happened to be critics of Mr. Yanukovych’s electoral machinations in the run-up to the Orange Revolution. Unsurprisingly, Mr. Yanukovych’s allies have tarred the three as corrupt. Their departure transforms an already spineless institution into a rubber-stamp body, and opens the way for Mr. Yanukovych and his allies to introduce further anti-democratic measures. This bodes well for Mr. Yanukovych’s goals of increasing presidential powers and lengthening his legal term in office, in the mold of Kazakhstan, Russia, and other post-Soviet authoritarian states.

These latest developments come as Ukraine’s democrats deal with the Yanukovych era’s first “disappeared” dissident, editor Vasyl Klimentyev, who left his house in Kharkiv in early August and never returned. Kharkiv’s mayor, a Yanukovych crony, pooh-poohed Mr. Klimentyev’s disappearance and implied that he may have fled for personal reasons. But the timing of his disappearance is striking: Mr. Klimentyev was investigating local government corruption by allies of Mr. Yanukovych. By now, the consensus is that Mr. Klimentyev is dead and that he is “Gongadze II”—a reference to Georgi Gongadze, the journalist who disappeared and was beheaded in 2000 for opposing the regime of then-President Leonid Kuchma.

Mr. Yanukovych’s message to Ukraine—and the world—is clear: The courts and the capital city are now in his pocket, and free thinkers have been put on alert. Democracy can now be steamrollered at an accelerated pace. R.I.P., Ukrainian liberty. We hardly knew ye.

Alexander J. Motyl (Ph.D., Columbia University, 1984) is a Contributing Editor at the Atlantic Council, and a professor of political science at Rutgers University-Newark. This article originally appeared in The Wall Street Journal.