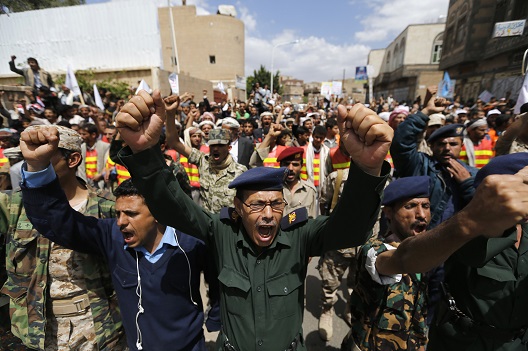 Eight months after Yemen sparked hope for its stabilization with a broad political accord for a new, federal state, that agreement has eroded into massive protests that threaten to undermine the earlier progress. Tens of thousands of Shia tribesmen from Yemen’s Houthi movement have besieged the capital, Sanaa, for more than two weeks, demanding an end to corruption, the resignation of the government of President Abdrabbo Mansour Hadi, and the restoration of fuel subsidies Hadi removed in July.

Those subsidies had swollen to an unsustainable 20 percent of the state budget, and Yemen’s international donors encouraged their removal as part of a plan to stabilize the economy. But the consequent doubling of gasoline and diesel prices unleashed latent (and growing) resentment toward Hadi’s government. Relatively inexpensive fuel had been one of the few tangible social benefits in a largely poverty-stricken nation.

Yemen has not enjoyed a pleasant transition in the past few months. Bad habits from the pre-revolution days reemerged as elite and partisan interests dominated and paralyzed the government. Al-Qaeda remains active in a country that already faces tribal conflicts over representation and resources. As Hadi’s government gave priority to its efforts to deal with such security challenges, it ignored vital steps to prepare the public for the cuts to fuel subsidies.

How Not to Reform

Yemen’s approach is “a perfect case study of how not to introduce subsidy reform” to an impoverished population, according to  Danya Greenfield, acting director at the Atlantic Council’s Rafik Hariri Center, and Svetlana Milbert, the Center’s assistant director for economics. In an article for the center’s MENASource blog, they describe how the government and its international donor group, Friends of Yemen, agreed to an economic plan in January that included a comprehensive public education campaign. The campaign was designed to communicate exactly what would be done and when, why energy reforms were necessary, how the most vulnerable population would be protected, and how funds would be reallocated toward other social benefits. Had the government followed this strategy, it might have achieved enough support from political actors and social groups to mitigate public anger, Greenfield and Milbert write. Instead, it threw out the manual.

The Houthi protests have revealed a critical lack of trust, and the unraveling of the social contract, between the government and large parts of Yemen’s periphery. Many Yemenis believe that the government simply cannot be salvaged. In their view, official favoritism, corruption and lack of transparency could only mean that any government revenue saved due to the new energy policy would line the pockets of vested interests as opposed to creating jobs or investment opportunities.

Although President Hadi has recently received backing from the Friends of Yemen, the Arab League, Saudi Arabia, France, and others including tribes within the central Sana’a province in Yemen, he faces an uphill battle to regain the legitimacy he lost with the lack of engagement with his own people. Hadi last week backtracked on his fuel reforms and promised to change out his government, but the Houthi movement  rebuffed that initiative, deciding instead to escalate their protests to include civil disobedience. The government’s lack of credibility among the Houthis and their supporters was simply too high and most felt that Hadi would replace his ministers with like-minded officials.

To put Yemen back on track, the government must rebuild trust by managing its vested interests, but ensuring people-based policies. Any major political or economic decision creates winners and losers. Yemen has its friends but they cannot help if Yemenis cannot trust the government to work toward improving their basic standard of living. The Hadi government missed an opportunity to build that trust. Now it must redouble its efforts in seeking macroeconomic stability, growth, and job creation, lest there be no winners at all.

Tarek Radwan is associate director for research at the Atlantic Council’s Rafik Hariri Center for the Middle East and editor of the Council’s MENASource blog.

Image: Army and police officers loyal to the Houthi Shi'ite group demonstrate near the Cabinet's headquarters to demand for the resignation of the government, in Sanaa September 1, 2014. Defying calls by the U.N. Security Council to end hostilities against the Yemeni government, Shi'ite Houthi leader Abdul Malek al-Houthi on Sunday urged supporters to wage a campaign of civil disobedience until their demands are met. (REUTERS/Khaled Abdullah)