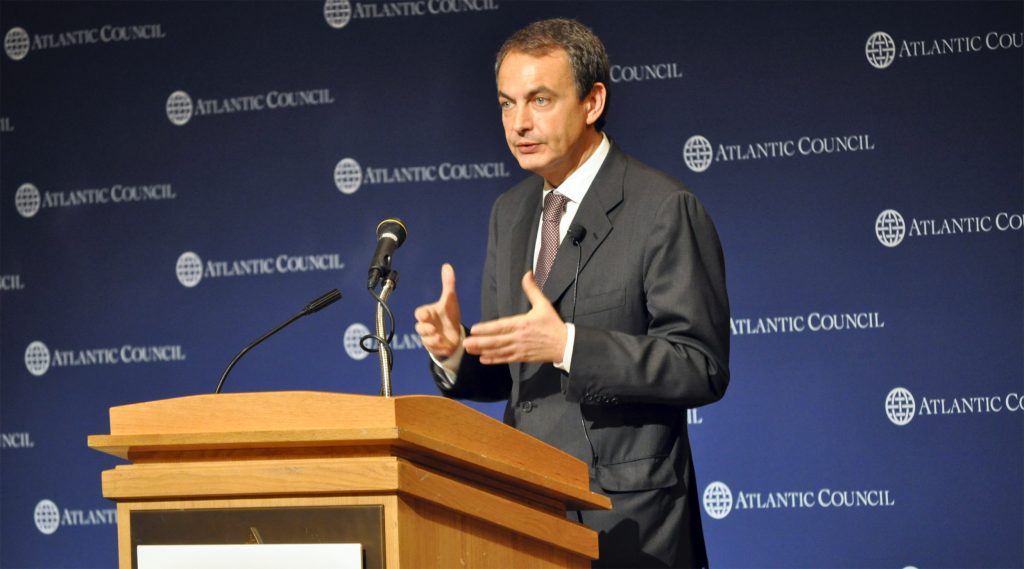 Despite coming off what the Spanish press has dubbed “Zapatero’s Horrible Week,” the President of Spain gave an inspired and constructive speech before the Atlantic Council in Washington last night.

The past week has truly been a difficult one for President José Luis Rodríguez Zapatero.  At Davos, Spain was singled out along with Greece and Latvia for its seemingly interminable economic woes. In a bid to cut the ballooning Spanish deficit, Zapatero upon his return from the summit moved to raise the retirement age in Spain.  Yet this has led to a chaotic national debate and pitted many of his closest supporters against him.

Then came the announcement that President Obama will not be attending the May 2010 U.S.-EU summit in Madrid, citing pressing domestic concerns.  As if this were not enough, during this Washington trip, Zapatero’s only opportunity to speak with President Obama was briefly during yesterday’s National Prayer Breakfast.  The Spanish press pulled no punches, and made much of the agnostic head of an agnostic political party taking part in such a grand religious tradition.  To top everything off, the Spanish stock market suffered a minor collapse on Thursday, dropping 5.9 percent amid further economic concerns in the worst single-day loss since November 6, 2008.

Yet if these concerns were on President Zapatero’s mind last night he hardly showed it.  Instead, he spoke in ambitious terms as both the President of Spain and as the recently-anointed holder of the rotating six-month presidency of the European Union.  In his remarks, he moved between these roles with protean skill.

He was most European in calling for the EU to take on more of a leadership role in global affairs.  Spain is the first holder of the EU presidency since the Treaty of Lisbon took effect last December, and one of its major priorities will be seeing to the treaty’s implementation.  “The EU is streamlining itself and aiming to become more solid” with a more unified foreign policy, he said.  While “the U.S. is still the first world power,” he argued that the United States needs Europe and together the two must adapt their relationship to face the realities of the 21st century.  He also called for more inclusive international structures, such as the G20, that recognize the “new reality” and more successfully incorporate “emerging powers and sub-represented powers.

On security, Zapatero reaffirmed Spanish and European commitment to NATO and Afghanistan, and called for an immediate resuscitation of Middle East peace negotiations.  While noting that radical ideologies must be combated with force of arms, as in Afghanistan and elsewhere, he emphasized that curbing the expansion of radicalism will require more long-term strategies.  This, he said, was the idea behind the UN Alliance of Civilizations initiative, which was established by Spain and Turkey in 2005.  On NATO, he argued that the alliance is and must remain a defensive coalition of democracies with no enemies and no sphere of influence.  NATO should also continue to redefine its objectives in the face of 21st century challenges and must conclude a new Strategic Concept at the Lisbon summit later this year.

Yet Zapatero the Spaniard was there as well.  Indeed, President Zapatero was most visionary in his call for a new transatlantic agenda that would include Latin America and parts of Western and Northern Africa.  While rising powers such as Russia and China must be included in any new strategic vision, he said that the U.S. and Europe could particularly benefit from a new “Atlantic Vision.” This would expand the influence of democratic values and integrate the states along the Atlantic rim into a more secure and prosperous relationship.

Spain, he noted, is in a unique position to serve as an interlocutor for all four corners of the Atlantic either by proximity or linguistic connections.  He said that a more closely integrated Atlantic Community could be accomplished in part through NATO and the Mediterranean Dialogue, as well as through direct U.S.-EU efforts and other EU projects.  The result, he said, would not only help curb the spread of extremism in North and West Africa, it would also help foster vital economic links between the North and South Atlantic.

When asked about President Obama’s decision not to attend the planned U.S.-EU summit in Madrid, Zapatero was unequivocal.  “We know Obama is busy,” he said. “He has paid a great deal of attention to Europe and met nearly all European leaders in the past year.  We know the EU is a priority for Obama. We will hold the summit when the EU and U.S. are ready, and when it takes place, it will be substantive.”  Missing the opportunity to host a U.S.-EU summit is truly a blow to Zapatero on the domestic stage, yet on this issue he assumed the greater EU perspective and remained constructive.  “All doors are open to Obama.  We trust him as before and will work arm in arm.”

This was an important statement.  In it Zapatero recognized not only Obama’s oppressive workload and the challenges to hosting EU summits amid massive restructuring of the Union, but also the need to better coordinate transatlantic cooperation to avoid similar imbroglios in the future.  If Zapatero possesses one quality, it is the ability, even after a particularly difficult week, to remain optimistic.

Nicholas Siegel is assistant director of the Transatlantic Relations Program at the Atlantic Council.