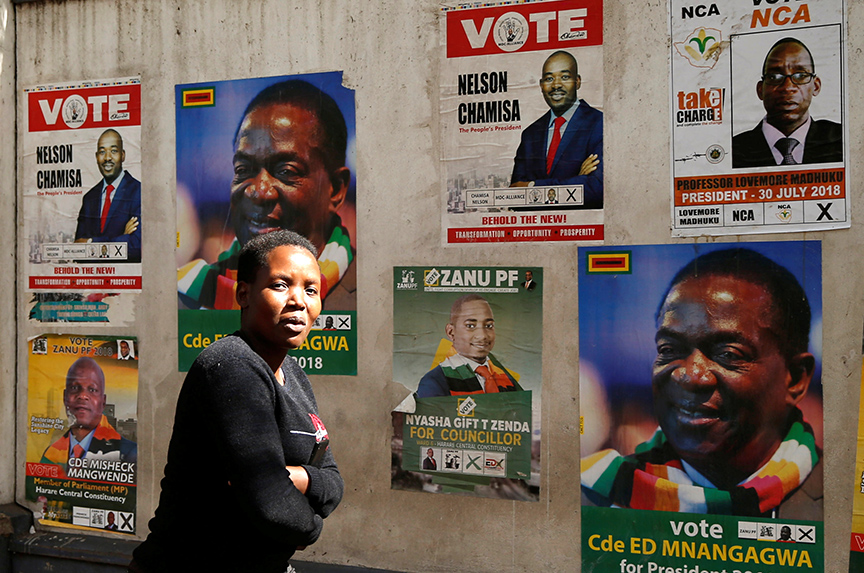 Election posters were plastered on a wall in Harare, Zimbabwe, on July 19. Zimbabweans will vote on July 30 in their first presidential election in more than thirty years in which former President Robert Mugabe is not on the ballot. Mugabe resigned on November 21, 2017, in the face of pressure from the military, his party, and the Zimbabwean people. (Reuters/Philimon Bulawayo)

On July 30, for the first time in more than thirty years, Zimbabweans will vote in a presidential election in which one name will be conspicuously absent from the ballot: Robert Mugabe.

Mugabe stepped down in the face of pressure from the military, his party, and the Zimbabwean people on November 21, 2017, even as impeachment proceedings got underway in parliament.

Zimbabwe, which Mugabe transformed from southern Africa’s bread basket to a basket case, now stands at a critical inflection point.

Mugabe’s successor, Emmerson Mnangagwa of the Zimbabwe African National Union-Patriotic Front (ZANU-PF), is in a close race with Nelson Chamisa of the Movement for Democratic Change-Alliance (MDC-Alliance). In all, twenty-three candidates are running for the presidency.

J. Peter Pham, vice president for research and regional initiatives and director of the Atlantic Council’s Africa Center, discussed in an interview with the New Atlanticist’s Ashish Kumar Sen why this election is so important. Here are excerpts from our interview.

Q: This is the first election in Zimbabwe in more than three decades in which Robert Mugabe is not on the ballot. Is Mugabe at all a factor in this election?

Pham: Although he is not on the ballot, Mugabe’s absence looms large over the election. This is both because the voters have the opportunity now to move beyond the dictator who made their lives such a nightmare and because some parts of the international community are willing to accept any reasonable outcome—since it will not be Mugabe—as long as this election beats the rather low bar of previous Zimbabwean elections.

Q: What opportunities await Zimbabwe if this election is free, fair, and credible?

Pham: Thanks to Mugabe’s poor governance and his appalling human rights record, Zimbabwe has fallen over the years progressively farther and farther behind where it was at the moment of its independence. This is a country that, as many people have said, has gone from being the bread basket of southern Africa to a basket case.

Farmers have been driven off their land, which has been given to cronies who know nothing about farming. In the process, white farmers and rural Zimbabweans who worked on these lands have both been impoverished, while the country and the region that depended on it went hungry.

The United Nations estimates conservatively that almost 30 percent of Zimbabwe’s population faces food insecurity. That number is going to rise during the season, which will come next January to March, before the next harvest.

Also, because of its behavior, the government of Zimbabwe has fallen progressively under sanctions—not just Mugabe himself, but also many of his close collaborators, including [Zimbabwean President] Emmerson Mnangagwa who has been on the US sanctions list since the George W. Bush administration for his role at that time in supporting Mugabe’s hold on power. As a result, we are unable to deal and engage with many of the officials in the government. The lifting of sanctions on the country and on individuals is predicated on a free and fair election. Until that happens, the sanctions remain in place and Zimbabwe will be unable to get debt relief or even clear its arrears to International Financial Institutions, which makes it difficult—if not altogether impossible—for the country to access credit markets to finance much-needed infrastructure without which an economic recovery is difficult to imagine.

Q: Has the international community dangled the prospect of lifting sanctions if Zimbabwe holds a free and fair election?

Pham: There is broad consensus that if the elections are free and fair, the international community will look to bring Zimbabwe in from the cold—lifting sanctions, trying to reintegrate it into the global political and economic order, giving it a soft landing.

The question is going to be: what is the standard for a free and fair election? On this there is going to be a discussion now and after the election. There are some who can be anticipated to endorse any election they have ever been to—here I speak of the African Union that rarely, if ever, criticizes an election it observes; even some of the worst polls get the stamp of approval. In 2008, when Mugabe lost the first round of the presidential election and used brute force to force his opponent to withdraw ahead of the second round, the AU literally welcomed him just days afterward to its summit.

Then there are countries that are, for various reasons, so desperate to lift sanctions there is a legitimate fear that they will accept as “free and fair” anything that doesn’t look like Zimbabwe 2013 or Zimbabwe 2008, which is a pretty low bar. Here I speak specifically of the British, for example, who have already pretty much tipped their hand. The United States and the European Union would do the Zimbabwean people a service by holding firm and insisting on a poll that, even if not perfect in every respect, at least can be said to reflect the will of the people.

Q: When we last discussed Zimbabwe you noted that Mugabe’s exit marked the beginning of a new chapter for Zimbabwe. How have things worked out for Zimbabwe and Emmerson Mnangagwa over the past eight months?

Pham: The climate in Zimbabwe clearly has changed. One has seen an election campaign—the first in almost two decades—that has been largely free of violence. That is a step forward and people’s expectations are very high.

But there are also some very troubling signs. There is the question of whether the military leadership, having carried out what was effectively a coup [to oust Mugabe in 2017], is willing  to cede power to others should the side it favors lose the election. There have also been worrisome indicators emerging about the electoral process itself. For example, instructions that went out to local authorities just days ago seem to have instructed  local election officials to turn polling booths turned around so people vote in full sight of everyone. There have also been questions about the cleanup of electoral rolls. The election commission has purged several hundred thousand people from the electoral rolls and adopted a biometric system to prevent people from registering and voting more than once. The actual rolls, however, have not been published and there are suspicions among some opposition leaders that there are still ghost voters on the rolls. Then there are accusations that local authorities are using food as a weapon to incentivize or threaten voters in rural areas.  There are also concerns about the placement of candidates’ names on the ballot—Mnangagwa notably appears at the top of the second of two unequal columns. People see this as the sign of a plot. I am not saying that it is necessarily the case, but one should err on the side of greater transparency to show that this election is truly free and fair.

The Zimbabwean constitution also mandates that all major candidates and parties be given equal access to state media, which is the dominant media in Zimbabwe these days because most of the free media was run off—or worse—by the Mugabe regime. Coverage to date, however, has been largely focused on the incumbent president with very little time given to the opposition candidates.

Q: What has Mugabe’s resignation meant for public support for his party, the Zimbabwe African National Union-Patriotic Front (ZANU-PF)?

Pham: It is difficult to gauge. ZANU-PF clearly dominates the airwaves and print media because of the state control of these outlets. Furthermore, ZANU-PF, while it was the political arm of a dictatorship, was also a widespread and well-organized party. To what extent is its network delivering, one doesn’t know.

The fact that there are twenty-two candidates running against Mnangagwa does also split the opposition to a great extent, although in theory they could all rally around one person if in fact this goes to a runoff.

Q: What impact is the split in the ZANU-PF between the Generation 40, which supported Mugabe’s wife, Grace, for the role of party and state president and Lacoste, which supported Mnangagwa, likely to have on Mnangagwa’s election prospects?

Pham: As an incumbent, Mnangagwa has largely maintained control of the party apparatus. He clearly has the benefits of incumbency. In many respects, it is his election to lose.

For the opposition, longtime opposition leader Morgan Tsvangirai died earlier this year. He was a figure who united the opposition. Most people acknowledge that he was cheated out of the presidency in 2008. After his death, the MDC itself splintered so badly that there were even scuffles at his funeral between supporters of different factions of the MDC.

Q: Mnangagwa and Nelson Chamisa of the MDC-Alliance appear to be running neck and neck. What are the prospects of a unity government?

Pham: I am very skeptical of unity governments. They are nice in theory, but the fact is that in most developed countries we would never accept or ask for them. And yet, we insist on forcing these untenable cohabitations on African and other developing countries as a quick way of defusing post-electoral crises so that we can “move on.” I think that’s a mistake.

Zimbabwe 2008 proved that about the only thing good that came out of the unity government was [opposition politician] Tendai Biti as finance minister: he succeeded in taming of the country’s hyperinflation by dollarizing the economy. Other than that, the unity government actually weakened Tsvangirai and the MDC because they became complicit in a  government that they did not completely control. The result was that the voters turned on them in the following election and, to be frank, they have yet to recover from that cohabitation with the devil.

Kenya 2007—exact same issue; under international pressure, a unity government was created that didn’t work so well—except for the politicians who filled up the bloated cabinet.

What is much more important would be a free, fair election; the results accepted by most people as legitimate; and Zimbabweans moving on in whatever way they choose. Whether that happens next week remains to be seen.