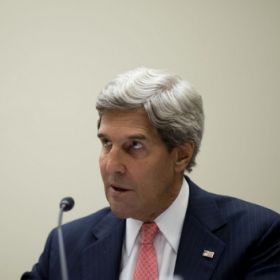 Iran
Despite high expectations on both sides, Iran and the P5 +1 did not come to an agreement on Iran’s nuclear program this past weekend. However, both Iran and the United States insist that despite a lack of a concrete deal, considerable progress was made in the negotiations. Iran has promised to offer more information and expanded access to UN nuclear inspectors. Still, it is unclear exactly why the negotiators were unable to make a deal. Some have speculated that the France broke rank with the rest of the P5+1 and demanded more concessions on enrichment levels and the Arak water reactor. But, Secretary Kerry, keen to display a united front, insists that Iran ultimately did not accept the deal. The negotiations are set to resume next week.

Relevant News Stories:
A Stumble in Geneva, But Iran Nuclear Talks Still Have Legs (Al-Jazeera)
Iran, US Blame Each Other for Failed Nuclear Talks in Geneva, Some Diplomatic Progress Made (The Washington Post)
Bid for More Sanctions on Iran Could Reach US Senate Next Week (Reuters)
An Iran Nuclear Agreement Could Help Afghanistan and South Asia (Voice of America)

Pakistan
Polio strains originating in Pakistan have been found in Syria, and appear to be spreading across the Middle East. Closely related strains of polio have been found in Egypt, the Palestinian Territories, and Israel. Pakistan is one of only three countries where polio is still endemic. The World Health Organization has pointed to Pakistan as one of the key countries preventing the eradication of polio. While the Pakistani government approved WHO’s resolution to eradicate the disease, it will be very difficult to enact. Many militants along the AfPak border, including the TTP and their new leader, oppose polio vaccination. As a result, it is extremely difficult and dangerous, to vaccinate children in militant-controlled areas. Until the Pakistani government is able to gain control over those parts of Pakistan, polio will likely continue to flourish.

Bangladesh
On Thursday, November 14, factory owners in Bangladesh agreed to raise the minimum wage by 77%. This proposal would officially raise the wage from $38 a month to $68 a month. The factory owners were initially reticent to accept the increase, and insist it will put a strain on smaller factories in the area. Even with the increase, the wage will be the lowest for garment workers in the world. It is unclear whether or not the increase will appease protesting factory workers. More than 100 factories have been closed this week due to protests from garment workers who insist that they will not accept a wage of less than $100 a month.

India
Sachin Tendulkar, famed Indian cricketer and one of the best batsmen of his generation, began his last test match on Thursday. Tendulkar started his career at the age of 16 in 1989. In his nearly 24 year career, he has played more five day and one day international matches than anyone else. He is also the highest career run scorer in both formats. To say he is a hero in India, where cricket is by far the most popular sport, is an understatement. This last match has been covered as headline news all across the country. Tendulkar’s legacy, however, is about more than cricket. His career rise coincided with both the growth of satellite TV in India and a particularly tenuous time in Indian politics. He is seen as a unifying figure in a deeply divided country. Poet CP Surendran once said, “When Tendulkar comes to the crease, a whole nation, tatters and all, marched with him to the battle arena.”

Afghanistan
On Saturday, November 9, Jamaher Anwari, Afghanistan’s Minister of Refugees and Repatriation appeared before the Afghan parliament to discuss allegations of corruption within the ministry. During the hearing, a group of protestors gathered outside the building to protest Anwari’s policies regarding the deportation of Afghan migrants. There are an estimated 2.7 million Afghan migrants spread across 82 countries, yet there are few policies in place to protect them. The protestors also accused President Hamid Karzai of signing memorandums of understanding with foreign governments that authorize the deportation of Afghans – rather than agreements that would enable Afghans to work abroad and send money back for their families. Remittances are often a key source of income for families in South Asia so this policy has a particularly negative effect on the Afghan economy.