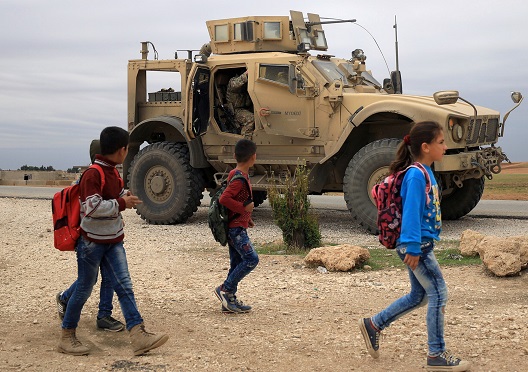 An American president impetuously overrules his national security team with a sudden decision on Syria; one that pleases the Kremlin, undermines US policy, and damages his own credibility. Essentially unmoored to the national security apparatus over which he presides, the president—strongly influenced by the views of a foreign leader—thinks he knows best in any event.

Acting without deliberation and with the thinnest of consultation, the president unintentionally but decisively rewards a murderous Syrian regime, gratifies the external supporters of that regime, and broadcasts a message of weakness and inconsistency to enemies—including Islamist extremists—of the US around the world.

Former US President Barack Obama and the red line fiasco of 2013; current US President Donald Trump and the out-of-Syria episode of 2018. Who can claim that American foreign policy—at least in the case of Syria—lacks continuity? For all of his full-throated condemnation of his predecessor, President Trump has paid Mr. Obama the sincerest form of flattery. Although neither lacked the constitutional authority to decide as they did, both lacked the will, the strength, and the judgment to listen carefully to the views of loyal, dedicated senior officials before acting.

In the chemical weapons red line case, President Obama’s vice president, secretary of state, and national security advisor all counseled him on the perils of bluffing. But bluff he did. When Russian President Vladimir Putin moved against Ukraine and seized Crimea in 2014, he was so thoroughly schooled on the reaction he might expect from his American counterpart. In the case of President Trump, the consequences of a gratuitously hasty and ill-thought decision will unfold in the fullness of time. Act in haste, repent at leisure.

This writer has, for years, criticized another hasty, thoughtless decision of the Obama administration in Syria: the adoption of a Syrian Kurdish militia to prosecute the ground war against ISIS (ISIL, Daesh, Islamic State). The administration’s refusal to build and lead a professional ground force coalition-of-the willing to kill ISIS in Syria quickly created a bilateral crisis with Turkey, extended the life of ISIS long enough for the “caliphate” to hit Europe with lethal terrorist strikes, and increased the damage to areas and people liberated from ISIS by using a relatively unskilled militia to engage in the street-by-street, building-by-building challenge of urban warfare. The lazy, ill-considered decision to use the Syrian chapter of the terrorist Kurdish Workers’ Party (PKK) to fight ISIS has kept the US engaged in eastern Syria longer than it took to fight and win World War II.

And yet: the Kurds and the multi-ethnic militia they now lead (the Syrian Democratic Forces—SDF) have fought hard and have taken high casualties. The fight continues, notwithstanding President Trump’s declaration of mission accomplished. Relationships of trust and confidence have been built over the years between these forces and the US Central Command; relationships that, to be sure, annoyed and infuriated Turkey. The view here is that the “by, with, through” operational concept (which centers on using local forces) has been misapplied in Syria with disastrous political, military, and humanitarian consequences. Still: to the extent that President Trump simply walks away, leaving these collaborative forces to the tender mercies of the Assad regime and Turkey, “by, with, through” becomes a dead-letter in all future cases where American credibility and consistency might be important to the decision-making calculus of local actors.

The task facing this administration was to square the circle of Turkish-Kurdish enmity in eastern Syria so that Syrians living east of the Euphrates River—Arabs, Kurds, and others—could build a governance alternative to the extremist-abetting Assad regime and the Iranian-commanded foreign fighters supporting it.

Only by allowing such an alternative to take root under the shelter of a post-ISIS stabilization effort could the prospect of a negotiated end to Syria’s agony become possible. Only by convincing armed Kurds to refrain from trying to rule Arab areas could such a vital step be achieved. Yes, this would have been a diplomatic lift of considerable weight and difficulty. Yet, if President Trump has meant any of what he has said about Assad’s encouragement of extremism or Iran’s threat to Israel and the region generally, he would have commissioned the effort and played a role in trying to implement it.

Arguably the 2,000 uniformed Americans in eastern Syria are not critical to completing the military defeat of ISIS. Their advisory and artillery support presence has, however, been a tripwire deterring Assad and his supporters from crossing the Euphrates River from the west. Where deterrence has failed, the consequences for Russians, Iranians, foreign fighters, and the regime have been lethal and decisive. It is no wonder that Mr. Putin expresses joy with President Trump’s announcement. It is a result he tried to achieve last July in his summit with Mr. Trump. Putin, at least, knows the virtue of patience.

American officials who have worked hard in this administration to build a sensible, implementable Syria strategy must face the possibility—perhaps the reality—that their work has been thoughtlessly and gratuitously undone. In 2013, Barack Obama at least got a commitment for the removal of Syria’s chemical weapons. Assad (of course) cheated his American counterpart, but much material was indeed removed from Syria.

What is Mr. Trump getting for his concession? A big arms deal with Turkey? The start of Syrian political transition talks in Geneva? The thanks of a grateful Kremlin? Has President Trump used his tremendous leverage in eastern Syria to obtain something of value for the national security of the United States? Officials stunned by the president’s announcement are not seeing the payoff. They now face a choice: successfully connect this president to his foreign policy and national security apparatus or leave. Their predecessors evaded making that choice, and the Obama administration ended up bequeathing to Mr. Trump a catastrophe in Syria and beyond.

By all accounts, the president has acted in haste and on the basis of instincts rather than knowledge. This need not be a hanging offense. But if the United States is to avoid repenting at its leisure this thoughtless move, the decision needs to be walked back, step-by-step. And those closest to the president must work harder to hard-wire him into his national security team. He is not, like a Pharaoh, above the system of governance over which he presides. Although he is “the decider,” he is not, constitutionally, a free agent.