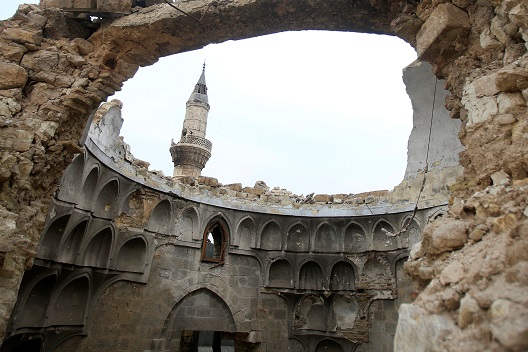 One of the priorities of current US programming has been supporting Syrian civil society and nascent local governing bodies in opposition area, which dates back to when analysts believed the Assad government would capitulate quickly and the new bodies would have to begin taking on public sector duties and providing public services. When considering reconstruction strategies, keeping such a focus will help stabilize the country in the long term by ensuring community buy-in and public involvement in government. However, US priorities have become unclear, seemingly balancing between defeating the Islamic State (ISIS, ISIL, or Daesh), restoring the façade of stability to the region, and not getting further entangled with fighting the regime and its international backers. Confused priorities create the risk that the United States will focus exclusively on physical reconstruction, neglecting civil society and good governance.

Involving Syrian civil society and local governing bodies in reconstruction is a mechanism for promoting local engagement in rebuilding communities. Civil society plays an important role in ensuring local ownership of services and projects, promoting participation with governing bodies, and dialogue between the public and local government. Public involvement in and ownership of public activities in general makes the government more responsive to people’s needs, thus creating a move stable governing system. It also prevents extremist groups from gaining a foothold by playing the service provision role and portraying itself as more responsive than the government to people’s needs.

Most of the actors who control territory in Syria, though, do not support the growth of civil society, and in fact are directly threatened by it. Assad continues to crush civil actors who are not sympathetic to his rule, and prop up certain NGOs that are affiliated with his regime, causing distrust for civil society as a whole. His regime has already been developing its own plans for reconstruction, which activists say is a play to consolidate power. Only 14 percent of NGOs in Syria operate in regime-held areas. These organizations face the additional difficulty of obtaining resources from donors outside regime territory.

NGOs in SDF and opposition territories also face repression. Extremist opposition groups such as Hay’at Tahrir al-Sham have no interest in giving in to citizen interests, and activists say they are just as oppressive as the regime. The Kurdish Democratic Union Party (PYD), the dominating party in Kurdish territories in northeast territory, is similarly oppressive.

Regime, opposition, and PYD actors alike favor repressing civil actors that threatens their power, particularly activities that would promote a more open society, public involvement, and scrutiny of the government. NGOs that do find ways to operate in these areas risk arrest or closure if they do not toe the line and avoid political and social development aimed at reforming society, instead focusing on necessary services relating to emergency relief and humanitarian aid and physical reconstruction. If reconstruction activities take place under these oppressive actors, they face two main risks. First, that the aid will hijacked by the regime or other actors. This is already happening with UN funded projects in regime territories, where the Assad government companies and organizations closely associated with it have received $18 million in UN funds for projects. Second, if reconstruction activity is limited to physical development, civil society will not be able to develop and play the essential role of ensuring community buy-in and creating dialogue with government. This, in turn, creates the risk of a government unresponsive to people’s needs, renewed war, and of extremist groups taking advantage of public dissatisfaction to recruit.

To support civil society growth and participation in reconstruction, the United States needs to consider how best to insulate its programs from being twisted to the advantage of any oppressive actor. Interestingly, the United States has developed a significant amount of experience in doing this in Syria. US-funded projects have operated for years now in opposition held territories, developing techniques to ensure accountability and prevent aid from falling into the hands of extremist groups. The operations have not been full proof, and at times extremist groups have seized US-procured supplies and attacked US-supported groups, and the regime and its allies have similarly bombed and destroyed US-procured equipment during the course of the war. Nonetheless, the aid that the United States has provided has helped civil society groups grow, such as media groups that shed light on extremist groups’ violations, and local governing bodies that resist extremist groups encroaching on them. These programs should be reviewed for best practices, and assessments developed for deciding when an area can be worked in, and when the risk is too high.

The United States also has a strong physical presence in northeastern Syria, the areas liberated from the Islamic State that are largely under the control of TEV-DEM (which is associated with Kurdish PYD). In these areas, the risk of physical destruction of material is low in these areas since ISIS is being driven back and the regime is not actively bombing them. The challenge, then, is how to ensure that the nascent local governing bodies and civil society groups can operate freely. Currently, the new local councils in cities like Tabqa, and the provincial Raqqa council, lack legitimacy among the local Arabs, who accuse the TEV-DEM / PYD of appointing council members that are loyal to the PYD, or at least will not challenge its political aspirations. Despite that, the United States has already begun to operate in these areas, supporting local councils and civil society groups to execute small scale projects. Here, the United States’ priority will be to ensure that the local governing bodies can become representative of the people they govern, and that projects are not limited to physical development but grow to include political involvement.

The biggest challenge will be the regime territories. The United States will have to consider whether or not it is willing to risk operating in these areas, and if so what mechanisms it will develop to protect its projects from regime meddling. What level of risk will the United States accept to work in these areas? How will it ensure the independence of these activities from the regime? At what point does the United States say no to operating in a certain area? The southern province of Sweida, for example, has potential because it has been relatively left alone by the regime and opposition forces. Rif Damascus has the highest number of NGO’s in Syria according to a Citizens for Syria report.

The United States has found itself steadily getting more involved in Syria’s conflict over the years, and it is unlikely to find itself not taking part in reconstruction. Planning now, and allocating funds to develop strong operating mechanisms, will protect projects, and taxpayer dollars, from going to support oppressive regimes who brought Syria to where it is today.

Emelie Chace-Donahue is a former intern of the Rafik Hariri Center for the Middle East.

Image: Photo: A view shows a damaged dome of a mosque in the Old City of Aleppo, Syria January 31, 2017. Now gradual efforts are being made to revive the city, one of the oldest in the Middle East. The United Nations and international cultural agencies say they are committed to preserving and restoring Syrian heritage, but it will ultimately rely on local effort. REUTERS/Ali Hashisho