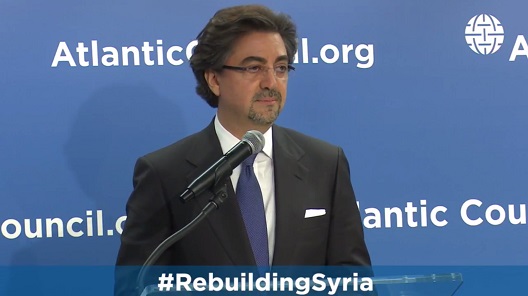 Below are remarks by Omar Shawaf and audio of the event on Rebuilding Syria: Reconstruction and Legitimacy hosted by the Rafik Hariri Center for the Middle East at the Atlantic Council in Washington on March 21, 2017:

Good afternoon…Thank you for joining us at the launch of the Atlantic Council’s newest initiative, “Rebuilding Syria: Reconstruction and Legitimacy”. This begins a two-year conversation that will produce a strategic roadmap to reconstruction in Syria that is informed by Syrians, academics, policymakers, and practioners.

I am honored to be here and be speaking on such a critically important and increasingly timely subject.

I wanted to start by expressing my sincere gratitude to the Atlantic Council, and the many people who are involved in this project.

Fred Kempe, for his leadership and support of both this effort and the Atlantic Council.

Ambassador Fred Hof, for his relentless pursuit of a peaceful resolution to the conflict in Syria through any and all means available to him. He is a true champion of the people of Syria and for this, we will always be grateful.

Faysal Itani, who is spearheading this initiative with gusto; grounding it in reality with academic rigor.

To our speakers today, who have so graciously given their time to share their wisdom and expertise, thank you.

And to those here today, thank you for joining us.

But we must remember that these numbers represent human beings, actual people. Families, children, whose lives have been ripped apart and turned upside down. Who are struggling every day for sheer survival, without basic necessities of food, water and shelter.

We will never forget the photograph of Omran Daqneesh sitting dazed and bloodied in the back of an ambulance after surviving a airstrike on Aleppo, or three year old Alan Kurdi’s body washed up on a beach as he and his family tried to escape the Syrian carnage to safety in Europe.

We cannot forget the valiant efforts of the White Helmets who risk their lives every day to dig out survivors after each air raid.

We have been overwhelmed and numbed by images such as these, of the destruction and devastation in Syria, and yet these atrocities persist.

We cannot… We must not forget what this effort is all about.  It is about people.  A great people that I feel honored to belong to: my people, my family, my kin.

We find ourselves with an opportunity to freshly examine policies and attempt to shape the discourse here in Washington, as well as in Europe and the Middle East . This is a push not only for Syria but for the greater Middle East, and our actions in the next months and years will dramatically effect that course.

The United States must lead again in thought and action in the region.  Yet, the White House must not make the mistake of taking the Middle East and its myriad of players lightly, and should also not be singularly fixated on ISIS and its brutal extermination of all who oppose their warped and evil views.

I urge you not to be swayed by the argument that this struggle is confined to, or defined as, a struggle against a satanic cult called ISIS or Daish.  The future of the Middle East and its entire people are at stake.

The world is interconnected like never before in human history, and we must therefore value each other as we value ourselves.  The idea of a fortress America, a disconnected Europe, an aggressive expansionist Russia is, or should be, a thing of the past.

A hands off policy in Syria has led to Russia and Iran filling the void with disastrous effects. But Russia, especially, must rethink its approach in Syria. A policy of destruction will bear severe consequences.

It is worth remembering that Russia was always considered by the Syrian people as a steadfast ally for good, not destruction and devastation, and they would do well to reconsider their path.

And above all, the United States and the world cannot allow the Iranian expansionism to go unchallenged.  The Iranian regime feels empowered as it has deliberately and methodically succeeded in Lebanon over the past three decades, and then in Iraq during the past decade. They now set their sights on Syria.

Iran, by far, poses one of the biggest threats that the Middle East has faced in recent history.  So, this is not just about Syria, or Syria and Iraq, or even the Levant. It is many moving parts that will directly or indirectly affect us all.

We should all be concerned about the national security implications, for the US, Europe and the Middle East, if we do not engage in an appropriate and full fashion in the rebuilding of Syria. There is just too much at stake for us not to have a proper conversation about how the rest of the world should be involved.

As Europe begins to defeat the ‘wrong kind of populism,’ as the prime minister of the Netherlands said last week, we must also respect and protect the independence of countries and their citizens.  The Syrian people should not be used as bargaining tools to advance the political interest or agenda of any particular party or country.

Therefore, and to give the Syrian population an opportunity to live and thrive where they belong, in Syria, all parties involved must respect the people.  The destruction and atrocities must end without preconditions.

I believe that we owe a debt of gratitude to all the countries that have taken in Syrian and Iraqi refugees and we would want to repay the kindness and humanity they have shown us by building an environment for all who wish to return to their native homeland. The overwhelming majority of Syrian refugees would choose to return home immediately, not tomorrow, not next year, but immediately, if the basic environment was available.

That is the purpose of this conversation during the next two years. This is a multi-national conversation, occurring amongst a number of government and non-governmental organizations.

Some might question the timing of this conversation given the ongoing violence…but the needs of the Syrian people are so great and the human costs are too high to wait for a solution. This is also a process that takes time. Starting it only when there is a solution is too late for those who will be returning home the day after.

Many who will participate in this conversation will disagree on specifics. But we all, most certainly, agree that our family, our people, come first, and we must, as a family, work together now.

We need to focus on what will be necessary for Syrians when they are able to return home. This is not an academic exercise, this is an effort to provide the framework and expertise needed to rebuild the great and proud nation we once were.

It’s not the stones that make our Middle Eastern society great; it is and will always be, our people.

For the full video of the event click here.

Omar Shawaf is a Syrian-Saudi businessman, philanthropist, and founder and chairman of BINAA.

Image: Photo: Still taken from webcast of event at the Atlantic Council on March 21, 2017.