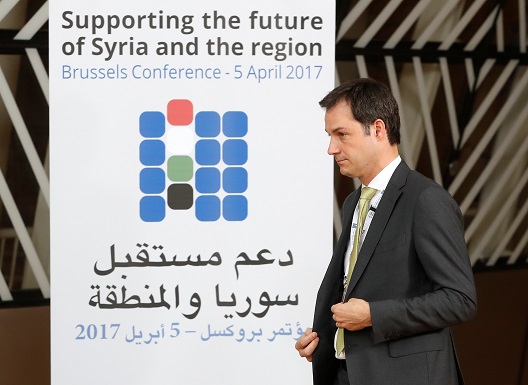 In early April, two days before the United States attacked a Syrian airbase with cruise missiles, high-level representatives from some seventy countries convened in Brussels for a conference on the future of Syria. The issue of Syria’s post-war reconstruction featured prominently on the agenda. Its presence signaled more than a concern with the daunting challenges of rebuilding a country devastated by six years of violent conflict. Reconstruction has become the latest political battlefield in struggles over the terms of a post-war settlement for Syria, and the future of Bashar al-Assad.

As the Assad regime gains ground, the United States, Europe, and international institutions face growing pressure to help fund the massive costs of reconstruction, estimated at more than $350 billion. To respond to these pressures, however, would be a mistake. Without mechanisms in place to prevent assistance being siphoned off by regime cronies to tighten their hold over Syria, Western support for reconstruction will only legitimize a murderous dictatorship, deepen entrenched systems of corruption and criminality, and undermine opportunities to address the grievances that drove millions of Syrians into the streets in 2011 demanding political and economic change.

To avoid these outcomes, funds provided by Western governments or international institutions must be managed through channels that are independent of the Assad regime, transparent, and subject to ongoing scrutiny. Mechanisms able to guarantee these conditions are possible to create, and would be consistent with the World Bank’s “new regional strategy for the Middle East.” Absent such mechanisms, Western governments, the Bank, and the United Nations should decline to participate in a reconstruction campaign that will be captured by, and distorted to serve the interests of, a corrupt, illegitimate regime.

An end to Syria’s violence is nowhere in sight, but with prospects for Assad’s departure receding, discussions concerning the conditions under which international actors might contribute to the country’s recovery have taken center stage. The stakes in this debate are high. EU officials view funding for reconstruction as their last bargaining chip, an opportunity to exert leverage and compel the Assad regime to accept a negotiated settlement that includes his eventual departure. Acknowledging that the EU and regional powers cannot permit Syria to become a “black hole,” exporting refugees and jihadist radicals into Europe, the April conference nonetheless affirmed the EU’s refusal to support reconstruction through an unreformed Assad regime. Recovery will be successful, the final communique stressed, “only in the context of a genuine and inclusive transition that benefits all the Syrians.” Prior to the April 7 missile strike, the Trump administration had not staked out a position on Syria’s recovery, but its willingness to accommodate Assad suggested it would be more prepared to make deals with the regime. However, with Trump’s abrupt about-face on Assad following the April 7 missile strikes, the EU may find the White House more inclined to view Assad’s presence as an obstacle both to ending the conflict and to post-conflict recovery.

Following the EU conference, pro-regime voices were quick to deride its position as “blackmail,” and to suggest, with little apparent sense of irony, that Europe should instead give in to the protection racket demands of the Assad regime to keep it from flooding Europe with new waves of migrants. Russia, meanwhile, whose air force has played a lead role in bombing Syria back to the stone age, flatly rejected responsibility for the costs of recovery. In a February meeting with European diplomats, Deputy Foreign Minister for the Middle East, Mikhail Bogdanov, insisted that the West pick up the tab for rebuilding Syria, and warned his EU counterparts to expect “nothing” from Russia. Playing on European concerns, Moscow is, of course, using reconstruction in its own quest for leverage. It hopes to parlay EU fears about refugees and Islamist radicals into engagement with the Assad regime, boosting Bashar’s tattered legitimacy abroad, while not incidentally, taking itself off the financial hook for its destruction of vast swaths of Syrian territory.

What this diplomatic struggle fails to recognize, however, is that the prospects for using reconstruction support as leverage are utterly unrealistic. This does not mean that the EU, the US, or the World Bank should give in to Russian demands to simply show Assad the money. Nor does it imply that the best course is to walk away. Rather, it makes clear that the only productive strategy for Western engagement in Syria’s recovery requires thoroughly insulating programs from the Assad regime—developing channels to fund and implement reconstruction that are not subject to the authority of the regime and prevent its participation in such activities—as well as operating on a scale consistent with the needs of trusted local actors and their capacity to absorb resources, combined with ongoing monitoring, and scrutiny of how funds are used.

Three factors loom large in support of such a strategy. First, even in the event of a meaningful, inclusive, political transition that can be launched, the continued presence of Assad regime networks, and of state institutions totally penetrated by the regime, guarantees that regime cronies will capture, corrupt, and abuse for the personal and political advantage any reconstruction program implemented through official channels. The sorry example of the UN’s humanitarian relief programs in regime-held areas of Syria is a compelling example of what is certain to happen without adequate protections. Research has demonstrated “systematic failures” in the United Nation’s inability to prevent regime cronies from corrupting assistance programs, who have milked the United Nations of tens of millions of dollars. This recent experience serves as a powerful warning about the inability of an international institution to police and control its own programs when confronted with the predatory conduct of a recognized member-state of the UN. It also makes clear that there is no way to engage the Assad regime on reconstruction that will not produce a similar outcome.

Second, imagining that reconstruction funding provides the EU with leverage overlooks both the regime’s position on the matter—a perspective that differs from that of its Russian patrons—and the very clear intent to use reconstruction as a bargaining chip of its own. Bashar al-Assad has repeatedly rejected Western participation in reconstruction without a “change in policy.” Earlier this year, Syria’s Minister of Economy and Foreign Trade, Adib Mayala, went several steps further. He warned the Western governments that Syria “has political terms. Before letting them participate in reconstruction process, we will demand that these countries apologize to the Syrian people and publicly acknowledge that they made a mistake.” And apologies alone, Mayalah, noted, are far from sufficient. In addition, he said, “. . . the Syrian people must accept their apologies. They must also apologize to their own peoples. Finally, they must be held to account by the ballot box.” These terms are not merely grotesque in absolving the regime of its complicity in mass murder, and in suggesting that the West undergo a kind of political “cleansing” before Syria will deign to permit it to fund reconstruction. They make clear that Western and international actors should not kid themselves into thinking they will somehow be able to define the terms on which reconstruction occurs if their support leaves open a role for the Assad regime.

Third, and perhaps most important, imagining that reconstruction offers the West a source of leverage ignores the efforts the Assad regime has already undertaken to safeguard its control over lucrative post-war recovery. Building on legislation and executive decrees enacted over the past five years, the Assad regime has put in place a legal framework that ostensibly empowers local investors to undertake reconstruction work, yet creates a web of connections that bind such projects to regime-controlled firms and NGOs. It has established a list of NGOs and agencies authorized to engage in reconstruction, all of which are either offshoots of regime cronies or have proven track records of subservience to the regime. It has awarded priority to Russia and China in reconstruction contracts, with Chinese officials avidly pursuing deals in Damascus, and Chinese firms dispatching representatives to scope out opportunities. It has also manipulated laws intended to encourage Syrian investments, such as Decree 66, which has been described as “the blueprint for Assad’s reconstruction of Syria,” and a tool through which the regime will transform areas formerly sympathetic to the opposition, including the Basateen al-Razi area on the outskirts of Damascus.

These conditions should not lead the US, EU, and international agencies to abandon their commitment to the rebuilding of Syria. What is needed, instead, is recognition that the only viable path forward is to implement recovery efforts independent of the Assad regime, to develop transparent, “cross-border” funding channels that are beyond the regime’s control, and to work with Syrian partners selected through independent vetting processes, including local NGOs, local councils, and internationally-supported agencies such as the Syria Recovery Trust Fund. Properly managed, the West can contribute positively to Syria’s post-war recovery without enriching regime cronies, giving legitimacy to the dictatorship in Damascus, or assisting in its attempts to reassert its iron grip over the entire country. To take this approach will require that the West give up the delusion of using aid as a source of leverage, and begin now to deploy its resources in targeted, effective, and more truly inclusive ways that hold out at least some promise of moving Syria toward the kind of governance that represents the best guarantee of its long-term stability, security, and development.

Steven Heydemann is the Janet W. Ketcham Chair in Middle East Studies, Smith College and a member of the Rafik Hariri Center’s advisory board.

Image: Photo: Belgium's Cooperation Minister Alexander De Croo arrives for a group photo during an international conference on the future of Syria and the region, in Brussels, Belgium, April 5, 2017. REUTERS/Yves Herman