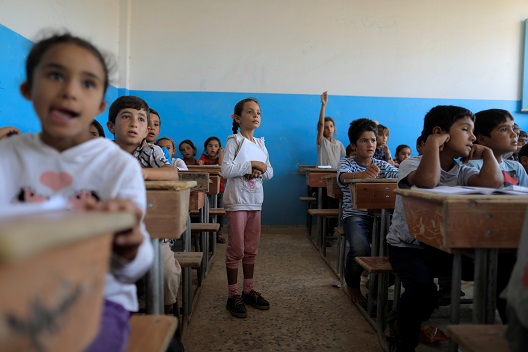 The Kurds in northern Syria have established their own education system in what they call Rojava, unfettered by the central government in Damascus, after taking control of the area following the Syrian regime’s withdrawal. This has been achieved through rolling out a Kurdish curriculum, which has so far been introduced for Kurdish (non-Arab) pupils in the primary and preparatory stages of their school education. They hope to follow this with a Kurdish secondary school curriculum, before opening universities in the three Kurdish provinces of Al-Jazira, Euphrates, and Afrin.

For decades Syrian Kurds have endured a ban on speaking and studying in their mother tongue; as a result of political pressure and repression from the Syrian regime.

Despite this fact, there is no consensus within the Kurdish population on the new Kurdish curriculum. The Kurdish National Council (KNC) represents a significant section of Kurdish society opposed to the democratic self-rule movement, and is critical of the monopoly held by the Democratic Union Party over the more social aspects of self-rule, including education. Arabs, both in the opposition and loyal to the regime, agree with the KNC. Some Arabs also have reached the conclusion that the steps taken in education constitute a step towards secession. Meanwhile, the regime’s opposition to the Kurdish curriculum has led to the closure of all government schools in the Kurdish regions. One Arab teacher said that “the Ministry of Education told us not to go to work in schools which are subject to Kurdish control.”

Samira Hajj Ali, the joint head of the education authority in the so-called democratic self-rule government in northern Syria, rejects the accusation that this is a secessionist act, saying “our aim is not a nationalist project, in fact it is against secession.” She adds that her movement favours the “democratic nation” idea which will “guarantee education and teaching for everyone in their own language without it being imposed on anyone else. This would mean Arabs studying in their language, Kurds in their language, and Assyrians in their language.”

Searching for an Alternative Education System

The Kurdish curriculum was rolled out at the start of this year. Subsequently, many Kurdish families began to look for Syrian public and private schools to send their children to so that they would be taught under the Syrian government’s curriculum which is widely accepted, unlike the curriculum drawn up by the government in northern Syria. Hasan, a teacher from al-Qamishli says that [Kurdish] “families are looking for places in Syrian government schools fearing that their children’s futures are at stake.” Samira Hajj Ali, for her part, says she supports and encourages implementing new ideas even if it’s new and has risks.

By visiting several private schools in north-eastern Syria, it is noticeable that a large proportion of the children are Kurdish, representing a larger group than Arabs and Assyrians combined. Solin, a child from the city of al-Malikiya (Dayrik), who is a student at a private school, says “there are more than forty Kurdish children at this private school being educated in the Syrian government’s Arabic-language curriculum.”

Some family members, who did not want their names to be revealed, mentioned that since the new year a number of officials in the parties which make up the government in north-eastern Syria had sent their children to private schools which teach using the Syrian government’s curriculum. Khadija, a woman from al-Malikiya, confirmed this saying, “enrollment in the private schools are reserved for the children of officials, while ordinary people cannot find places in those schools for their children.”

The government in al-Malikiya also trained twenty-eight teachers to teach Assyrian, but no Assyrian children attend the autonomous region’s schools, as they have all been sent to private schools.

Mahmoud al-Maadi, a former teacher and now independent Arab politician, thinks that the local north-eastern government’s education policy has caused problems with the Syrian government, leading to the closure of hundreds of government schools. He also described the new schools opened by the Kurdish authorities as “unqualified,” saying, “the teaching staff are ill qualified, and rely on loyalty to the Kurdish authorities for their positions.”

A Timeline of Teaching in Kurdish

Teaching the Kurdish language has been taking place in north-eastern Syria since 2012, when the Syrian regime withdrew from the northern regions. According to Samira Hajj Ali, this was at first done through small schools which were opened for teaching Kurdish. Then, a few hours of Kurdish language taught by a select few teachers were included on school timetables, until pupils had obtained a basic level of the Kurdish language.

After the Kurds announced their self-ruled polity, and a government with various bodies was formed, an education authority was formed in 2014. This body organized the training of two thousand six hundred teachers in 2016 specifically for instructing pupils in the three stages of school education using the Kurdish language. It also printed forty thousand textbooks to meet the schools’ needs. The first stage of school education starts at five years old and runs to the ninth grade of the new Kurdish curriculum. Samira Hajj Ali said “In the forth year, the curriculum begins to include a new subject: a Kurdish pupil will begin Arabic language lessons to continue until university, while in the fifth grade a foreign language, English, is added to the timetable.” She also added that the education authority has a special committee for drawing up the curriculum based in the town of Rmelan, which was formed in 2014 and consists of Arab, Assyrian, and Kurdish teachers.

Numerous local governments have sprung up since the beginning of the conflict in Syria and the withdrawal of the central government from many areas. Each of these local authorities has sought to exploit education for political gains by drawing up curricula with an ideology which bears a close resemblance to that of their group. In the Kurdish parts of northern Syria, a meeting was held between a committee from the Syrian government’s Directorate of Education and the education authority set up by the north-eastern government to try and reach an agreement on the education system there. The Syrian government offered to include five hours of Kurdish language instruction at specific stages of school education. However, the local government considered this a form of submission to the central government, and rejected the offer, leading to a failed negotiation. Hajj Ali also discussed the failure of a meeting between the local government and Unicef held in al-Qamishli, saying “Unicef did not present any new ideas. They proposed that we work with the Syrian government’s curriculum, which we refused to do.”

Samira Hajj Ali also rejected the accusation that the Kurdish curriculum too closely represents the ideology of the Kurdistan Workers’ Party, although she does not deny that her movement are adherents to the “democratic nation” philosophy drawn up by the Workers’ Party’s leader Abdullah Ocalan. She added: “The idea of the democratic nation means all elements of a society living together peacefully and guarantees everybody the right to study their language and their history.” A study by Ibrahim Khalil, published on the website ‘Madarat Kurd’ raised a number of points which indicate that the north-eastern curriculum closely follows the ideology of the Kurdistan Workers’ Party.

The KNC not only voiced their disapproval of the new Kurdish curriculum, but also encouraged its supporters to organize demonstrations. Demonstrations held both in and outside Syria described the Kurdish school curriculum as “the second step towards emptying the Kurdish areas of what remains of their Kurdish inhabitants.”

Mahmoud al-Maadi described education as one of the most important tools for building a society. It is his opinion that the more education keeps its distance from nationalist struggles, the more it will contribute to producing a generation free of complexes and the pollution of ideology. He hopes this will help to create a more cohesive and interconnected society. He described the local government experiment with the Kurdish curriculum as “irresponsible,” saying that it did not represent the beginning of cessation in a literal sense of the word, rather part of a process of imparting ideology, furthering nationalist causes and giving nourishment which will further sectarian strife. By the same token, it will debase the principle of a shared citizenship whilst encouraging the growth of local rather than collective identity. Samira Hajj Ali refutes this, saying “we didn’t impose the Kurdish language on the Arabs or on anyone else.” She considers voices of opposition at this stage to be perfectly normal and said “of course there will be reactions to this, but they will not impact our decision nor the steps we will take.”

Mahmoud al-Maadi also believes that the cultural rights which every group possesses grants it the right to open schools in its own language, but that “there is an official language of the state which should be the basis of the school curriculum.”

It is in the face of these challenges that the Kurds are taking steps as part of a wider project without imposing the Kurdish language in the curriculum. But in the wake of such steps the idea of a federal system is gaining ground across the region, although this idea faces a challenge represented not only by the Turkish rejection of this idea and its threat to invade Afrin, but also by changes in the balance of power within Syria. This change in the balance of power is due to the creation of a new alliance comprising Turkey, Russia, and Iran. Whether this alliance will have an impact on the Kurdish regions is as yet unclear in light of the presence of American forces supporting Kurdish and Arab forces militarily.