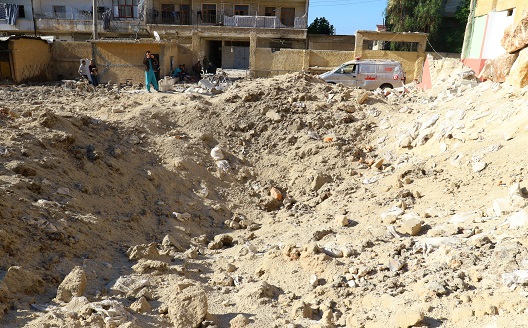 Throughout the conflict in Syria, regime forces and their allies have deliberately and systematically targeted medical workers, ambulances, and hospitals in opposition-held areas. There have been more than 454 attacks on medical facilities in the conflict, with the Assad regime and Russia responsible for ninety-one percent of them. Over 814 Syrian health workers have been killed since 2011. There is a strategic logic at play: by inflicting widespread injuries on local populations and then routinely destroying the healthcare that would treat them, areas eventually become unlivable. This strategy aims to break the will to resist in opposition-held communities and displace populations outside of regime control.

The consequences are devastating for civilians, and health systems across Syria have become fractured and broken. With the regime actively targeting healthcare in opposition-held areas, it is hard to imagine a time when a healthcare system will be overseen centrally in Syria. However, while the conflict is not over, planning for rebuilding local infrastructure and systems in Syria is overdue, as is thinking about what can be done to lay the groundwork for stabilization. Building underground and fortified hospitals in vulnerable areas now is a way to provide immediate protection while building critical health care infrastructure that can survive the fighting and deliver post-war benefits.

Clinics and field hospitals have already been moving underground and being fortified—into basements, in caves, fortified with sandbags and cement walls—to protect patients and medical staff. The Syria Campaign and thirteen leading Syrian medical NGOs recently released the report Saving Lives Underground: A Case for Fortified Hospitals in Syria highlighting the impact of such facilities. Over twenty percent of hospitals in opposition-held territory are now fully underground, and sixty-six percent use basements for major medical services. These reinforcements are effective in protecting lives: according to data compiled by the Turkey-based Health Cluster, no health workers have been killed from a direct aerial attack while in a fully underground hospital.

Medical groups like the Syrian American Medical Society (SAMS), Union of Medical Care and Relief Organizations (UOSSM), and the eleven other organizations signed onto the Saving Lives Underground report, work with local health directorates to assess local medical needs, and then work with engineering groups to develop and implement rebuilding and fortification strategies. Local engineers have developed best practices—in reality, various extreme measures—to fortify existing hospitals, basements, and cave hospitals to withstand aerial attacks and reduce injuries. Norms have developed around the ideal number of “sacrificial” floors, top floors that are not in use and act to absorb the blow of an aerial attack, and minimum underground levels. Concrete walls and sandbags reinforce the sides of hospitals. Glass panes are eliminated from windows. Advanced ventilation systems, securing clean air and exhausting contaminated air out, are adapted to fit different underground models. Particularly during chemical attacks, adequate ventilation can be crucial. The strategy of medical and engineering groups is to construct high quality hospital models that will be able to withstand current attacks and can be usable in a post-conflict setting.

Critically, being able to work underground also helps medics feel more secure, mitigating the dire shortage of health care workers that will persist well after the conflict is over. Since 2011, there has been an exodus of trained medical professionals, who have been targeted by detainment and arrest, as well as the systematic aerial attacks on hospitals. There is a global average of thirteen doctors and twenty-eight nurses and midwives for every ten thousand people. In contrast, in Syria, there are two doctors and four nurses and midwives for every ten thousand people. The greater security that underground hospitals provide is critical to encouraging the last few remaining trained doctors to stay and treat patients in opposition areas. Underground hospitals have an increased retention rate of staff.

Protection is the greatest need for medics. Funds to fortify hospitals and rebuild them underground is the most effective measure of operational protection, and is the number one donor request from all major Syrian medical NGOs. Additionally, the Turkey-based Health Cluster made official recommendations on the key strategies for “protection of health staff and patients” going into 2017. The top two recommendations were the fortification of existing hospitals and the construction of underground fortified facilities. Yet donor governments do not currently fund the fortification or underground rebuilding of hospitals. Nearly all of the funds for such work come from private funds and grants from Syrian NGOs, with the UN-led Humanitarian Pooled Fund being the only source of institutional funding available. Too often this results from a rigid divide between emergency humanitarian and long-term development funding. In the US funding structure, the Office of Foreign Disaster Assistance (OFDA), which funds the emergency humanitarian response inside of Syria, sees the fortification and rebuilding of medical facilities as a development activity, which is outside their mandate. USAID on the other hand does not fund activities in the medical sector in Syria as it considers that under the mandate of emergency response.

This disconnect leaves a funding gap for important activities that bridge the humanitarian and development sides. Underground hospitals are built with the aim of immediate, life-saving protection but would also serve as long-term health care infrastructure in a post-conflict Syria. Such projects also promote direct funding and support for the local health directorates, not only as leaders in overseeing and rebuilding health systems, but also as coordinating bodies that can take the place of a Ministry of Health in an early recovery phase. As with other sectors—education, shelter, food security, and livelihoods—the needs of the health workers in Syria extend beyond emergency requirements, and include elements of recovery and reconstruction. This is not a traditional relief or development context, and Syrian NGOs need support as they innovate and adapt their work accordingly.

Insufficient US support for a durable health care infrastructure represents a missed relief and development opportunity. It is critical that donor governments and funding agencies within them communicate and work together to identify and support activities that bridge short and long-term needs. With no solution to the conflict in sight, donors have rightly worked to adapt their funding to include non-traditional humanitarian activities, such as the operating costs of hospitals and salaries of medical staff. The physical protection of medical staff is a natural and logical part of that effort.

The need to save lives is reason enough for foreign donor and support bodies to invest in fortified and underground health facilities in opposition-held Syria. In addition, however, this opportunity allows the international community to lay the physical and institutional groundwork for stabilization and reconstruction, when Syria’s political and security circumstances allow. This is a low-cost, high-reward undertaking. On the other hand, if fortifying and moving hospitals underground continue to go underfunded, medics will continue to be killed or leave Syria, patients will suffer or die needlessly, healthcare in Syria will continue to break down, and refugees will be unable to return to affected areas. In addition to the immense suffering involved, this threatens to make substantial areas of Syria unlivable for the foreseeable future.

Kathleen Fallon is the Senior Humanitarian Advocacy Lead for The Syria Campaign and the author of the report Saving Lives Underground: A Case for Fortified Hospitals in Syria.

Image: Photo: A medic stands near a crater outside a hospital that was hit by overnight airstrike, in Kafr Takharim, northwest of Idlib city, Syria April 25, 2017. REUTERS/Ammar Abdullah