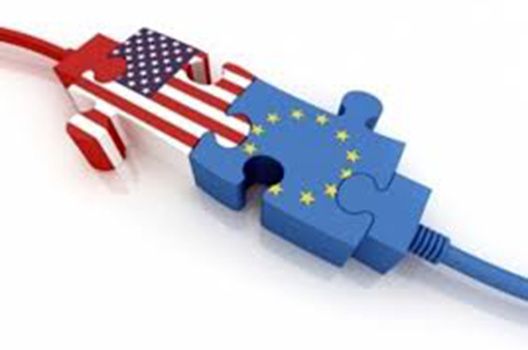 TTIP and the Renaissance of Transatlanticism Read about the latest developments in TTIP a week ahead of the next round of negotiations.

EU Welcomes New UN Convention on Transparency for Investor-State Dispute Settlement The Convention on Transparency in Treaty-Based Investor-State Arbitration will make it easier to apply UN transparency rules to investor-state dispute settlement. This development is crucial, said EU Trade Commissioner Karl De Gucht. The EU played a key role in drawing up these new transparency rules, which apply to any dispute settlement in treaties concluded after April 1st, 2014. The convention will now go for final adoption within the UN system, and will be open for signature in March 2015. (Europa) European Heads of Government call for the Completion of TTIP Negotiations by 2015 When proposing Jean-Claude Juncker to the European Parliament as the next president of the European Commission, the European Council also agreed on the strategic agenda of key priorities for the next five years. This includes the ambitious goal of completing of TTIP negotiations by 2015. (InsideTrade) House, Senate Trade Leaders Send Letter to Administration on US-China Strategic and Economic Dialogue Members of the House Ways and Means Committee and Senate Finance Committee sent a letter to the Administration ahead of the meetings of the US-China Strategic Economic Dialogue. While emphasizing that this year’s meeting was coming at an important time for multilateral trade, they also stressed the troubling nature of the slow pace of China’s domestic reforms. Furthermore, China’s implementation of existing commitments in bilateral and multilateral trade agreements have been inadequate and incomplete. (Ways and Means) EU Launches Negotiations on Environmental Trade Agreement The EU, along with 13 other WTO members, have formally opened negotiations in the WTO to liberalize trade in ‘green goods.’ Members of the initiative will aim to eliminate tariffs or duties on a list of green goods, and the EU in particular is interested in reducing barriers to trade in services. These negotiations have started as planned after the launch of the Green Goods Initiative in January 2014. (European Commission)

Fed Bond Buying Set to End in October The US Federal Reserve is set to end its huge program of asset purchases in October as long as the economy stays on track. The Fed has been slowing asset purchases every meeting this year, and plans to end with a $15billion taper in October unless there is a negative surprise in the interim. This will lead to increased interest rates. (Financial Times) Japan, New Zealand Leaders Confirm Cooperation for TPP Japanese Prime Minister Shinzo Abe and his New Zealand counterpart John Key confirmed that the two countries will be working together for an early conclusion of the Trans-Pacific Partnership trade negotiations. TPP will strengthen trade and investment across 12 participating countries, bridging the Americas and Asia-Pacific regions. (News on Japan) Juncker Makes Promises to Win Support Jean-Claude Juncker, in lined to be confirmed as the European Commission president, has made promises to MEPs in order to garner support. His term will begin constrained by these commitments, which range from job pledges to policy pronouncements. Juncker is leaving nothing to chance, and has thus reached out to smaller parties within the European Parliament to secure more support. (European Voice) AFL-CIO, ETUC Urge Exclusion of Public Services in Joint TTIP Declaration The AFL-CIO and the ETUC, large American and European unions, are slated to release joint recommendations calling on negotiators to exclude public services, respect local procurement preferences, and protect the precautionary principle as TTIP moves forward. This declaration goes beyond what either side has said previously in some areas, but also covers well-trodden ground for labor federations. (Inside Trade) A copy of the full AFL-CIO & ETUC letter is available here.

EU bets on TTIP to solve Russian Gas Addiction
Euractiv refers to the leaked strategy document of July 8, which disclosed that the EU wants to use TTIP to convince the US to end its ban on exports of crude oil, and expand its exports of natural gas. After the crisis in Ukraine, the EU wants to have access to a more secure energy source, lessening its dependency on Russia. (EurActiv)

What’s that Smell? – EU and US caught up in Cheese War
In the context of the upcoming sixth round of TTIP negotiations starting on July 14 in Brussels, the article looks at the dispute between the EU and US over the level of protection to be afforded to Geographical Indications (GIs) using cheeses as an explanatory case-study. The article raises awareness for the sometimes very much in the weeds discussions underlying the future transatlantic trade deal. (Marques)

Irish Regulator: Put Derivatives on TTIP Agenda
The markets director at Ireland’s central bank makes a strong case for including derivatives oversight on the TTIP agenda for the sixth round of negotiations starting next week in Brussels. He believes that TTIP is the perfect opportunity and forum to level out differences over substituted compliance and finding a common way forward on monitoring and data collection systems. (Risknet)

TTIP and the Renaissance of Transatlanticism
This Clingendael (Netherlands Institute of International Relations) report, written by Peter van Ham, is a detailed examination of the rebirth of transatlanticism through the prism of TTIP. He makes a strong plea for the conclusion of TTIP, arguing that the combined regulatory power of the US and the EU will bestow them with the opportunity to defend their economic interests as well as political values in times of the rise of other major global players. (Clingendael)

US and EU Unions Criticize Transatlantic Trade Deal
The article gives insight into the recent criticism on TTIP put forward by the largest trade unions in the US and the EU who are calling for additional online privacy protections and the removal of investor-state dispute settlement provisions from TTIP before they can support the deal. Their ‘ Declaration of joint principles’ calls for greater transparency of the negotiations and a guarantee to protect current labor standards on both sides of the Atlantic (Financial Times)

Obama’s Choice
In this Bertelsmann Foundation brief, executive director Annette Heuser addresses the recent spying allegations of US spying in Germany, claiming that they might have grave repercussions for transatlantic relations in general and TTIP in particular. She highlights the importance of a clear and thoughtful reaction by the Obama administration, urging the President to act decisively and definitively end the scandal. (Bertelsmann Foundation)

Ex-Im Bank Reauthorization: Same Ol’ Criticisms Neglect Bank’s Economic Value
The current fight over the reauthorization of the Ex-Im Bank reflects the return of an ideological debate that has been going on for at least the last 40 years, over the proper role of government in the economy. In his piece, Reinsch argues that due to the competitive nature of today’s global economy, it is common (and necessary) for governments to take extra measures to support their export industries and service providers when the private sector does not step in. (America’s Trade Policy)

Bridging the Pacific: Why Now – July 23 in Washington; hosted by the Atlantic Council – More details forthcoming.