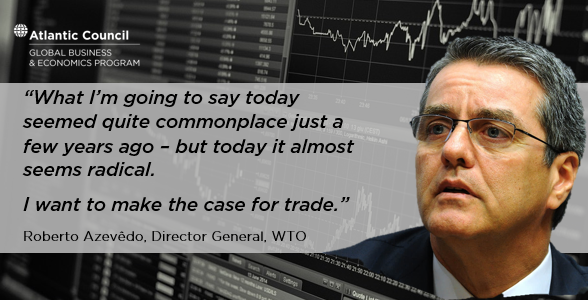 This week in TradeinAction: Happy World Trade Month! On the US side, the new US government has passed its first 100 days in office and the Senate has passed a $1 trillion spending bill that would keep the government running until September.


On the European side, the second round of French presidential elections is scheduled for this weekend. In the context of the European Month of Culture,  US lawmakers announced the introduction of the bipartisan Congressional European Union (EU) Caucus for the 115th Congress earlier this week. In other news, the European Commission reached an agreement with Athens on the Greek Stability Support Programme after months of negotiations.

SPOTLIGHT
A New Era for US Infrastructure
President Trump has compared the state of US infrastructure to that of the developing world and said his infrastructure plan which envisages a $1 trillion spend over ten years, is nearly completed. Legislators on both sides of the aisle in Washington agree on the need to modernize airports, roads, bridges and the like, but they have yet to reach common ground on how to pay for it. Join me on May 17 at the Atlantic Council Washington DC to engage with experts on the current and potential investment opportunities in US infrastructure. Register here.

Did you know that….the persistent US trade deficit is not actually the result of any one or even some collection of countries’ discrete misbehaviors? Whether the recently accused is Germany, Mexico, Japan, or China, their particular roles in mathematically contributing to the US trade deficit is confined to only a relative few years when compared to the duration of the deficit. Read more on what trade deficits really tell us about economies. (US Chamber of Commerce)

UPCOMING
EVENTS
May 10: Trade Backlash and the WorldTrade Organization, Brookings
May 11: The Future of the US Trade and Development Agency, CSIS
May 15: Future of the European Economy after the French Election, Peterson Institute of International Economics
May 17: A New Era for US Infrastructure? Event and Reception, Atlantic Council
May 18: Invest in America! 2017 Summit, US Chamber of Commerce

Your Newsletter Team:
Marie Kasperek, Associate Director, Global Business & Economics, Atlantic Council
Please send us suggested news stories, opinion pieces, publications, and upcoming events that you would like us to highlight! Email [email protected] with your ideas and suggestions.

The views expressed in this newsletter and linked external articles and content do not necessarily reflect the opinions of the Atlantic Council, its staff, or its sponsors.