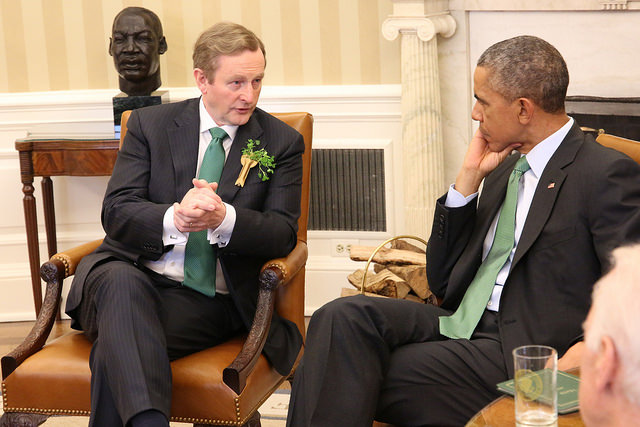 President Obama and Irish Prime Minister Edna Kenny said Tuesday that advancing a US-Europe trade agreement is a top priority for each of their countries. The Taoiseach noted that he plans to raise TTIP during a meeting with European Council President Donald Tusk later this week, and that the next six months would be imperative in deciding if the deal can come to fruition before President Obama leaves office. (White House)

“I believe the question about putting investment in TTIP is not whether we should do it, but how we can do it right? Can we design a new form of investment arbitration that keeps the benefits but avoids the negatives? I believe the answer is yes.” – Cecilia Malmström

Commissioner Malmström spoke yesterday about investment protection in TTIP at the European Parliament’s International Trade Committee. She noted that a full article in the agreement should make it clear that governments are free to pursue public policy objectives, and that they would be responsible for choosing the level of protection they deem appropriate. Second, the establishment of government-nominated list of trustworthy arbitrators would limit conflicts of interest. Finally, she also proposed the inclusion of an appeal body, with permanent members, directly within TTIP that would ensure consistency of interpretation and review decisions. (Europa)
For video, click here. For an analysis on her speech from Austria’s Der Standard, click here. (In German)

“TTIP and TPP could help push the world toward greater liberalization. Formal global trade negotiations in Doha are on hold but together TTIP and TPP represent ninety percent of the world’s GDP. These pacts could help set the global standards.” – Chairman Ted Poe

Last Tuesday, the House Foreign Affairs Committee held a hearing to discuss the strategic advantages of TPP and TTIP, noting that countering Europe’s dependence on Russian energy would allow the EU to take a firmer stance towards Russia. Currently, the US has more natural gas than it needs, but current regulations make it difficult to export. The only exceptions are for companies exporting to countries with free trade agreements with the US. (House Committee on Foreign Affairs)

Senate Finance Committee Chairman Orrin Hatch says he’s making progress in his talks with Senator Ron Wyden and Congressman Paul Ryan on the trade promotion authority bill that would streamline the passage of free-trade deals through Congress. A bill is expected to be released in April. (Reuters)

TTIP supporters must be more active on social media, where anti-TTIP groups seem to have the quasi-monopoly. Senior national politicians, CEOs of major corporations, as well as small and medium-sized businesses need to be more active in making a sustained case for TTIP. Finally, the US and EU need to find ways to be more transparent on how their discussions are producing results. The next stage of the negotiations will be as much about a transatlantic communications strategy as they are about actual progress towards a deal. (PR Week)

Daniel Hamilton and Joseph Quinlan from the Johns Hopkins University Center for Transatlantic Relations, note that although finalizing TTIP would be difficult, if done right America’s first “Pacific President” and his EU partners will go down as having re-founded the Atlantic Partnership. TTIP promises to reinvigorate confidence among the public and elites on both sides of the Atlantic, and set the principles guiding other countries (notably China) in their integration and participation in the global order. Finally, TTIP has strong strategic implications as a values-based, rules-based initiative that is likely to strengthen Western economic and social cohesion while reinforcing US commitment to Europe. (EurActiv)

For their full report on The Transatlantic Economy 2015, click here.

Daniel Hamilton’s testimony to US House of Representative’s Committee on Foreign Affairs notes that TTIP is important to US national security and foreign policy for various reasons. Not only does it have the potential to reinforce America’s transatlantic alliance, but it can also enable the US to be more effective when engaging third countries and addressing regional and global challenges and help the US strengthen the ground rules of international order. Hamilton notes that TTIP’s geostrategic impact could be as profound as its direct economic benefits. (Transatlantic Relations)

The fifth edition of the EU’s Trade and Investment Barriers Report released today, presents concrete obstacles to European trade. Many of the EU’s strategic economic partners have a number of barriers in place that significantly hinder international trade and investment opportunities of EU companies. These include requirements to use locally-produced goods and discriminatory taxes and subsidies. (Europa)

Shawn Donnan and Megan Murphy note that in order to pass TPP, the Obama Administration will first have to pass a series of hurdles, most important being getting TPA passed in a dysfunctional Congress. Trade is difficult to sell to the American public (half of whom believe trade negatively affects job creation), especially given strong political opposition from many Democrats and even some Republicans. Nevertheless, the Administration’s biggest hurdle is time: if TPP negotiations are not concluded in the next two to three months, political obstacles will increase, and the 2016 elections are quickly approaching. (Financial Times)

Putting TPP on the Right Track

Simon Johnson and Congressman Sander Levin note that there is a choice to be made between two different approaches to international trade. The first is based on an unbridled free-market view that more trade is necessarily better; the second recognizes that, without good rules, higher potential profits associated with new trade opportunities increase the temptation to pollute the environment and suppress worker rights. Johnson and Levin are proponents of the second approach, and note that it is important that the agreements rules be sufficiently forward-looking and strong enough to bring about meaningful improvements to people’s lives. (Politico)

Improve the Export-Import Bank Through Trade-Agreements

Jon Hartley, the co-founder of the financial technology firm Real Time Macroeconomics, emphasizes that US trade officials should negotiate to reduce international export credit agency subsidies in tandem with Export-Import subsidies through bilateral trade agreements. This would help palliate the competitive disadvantage catalyzed by reducing export subsidies only in the US. (New York Times)

Annual Transatlantic Conference – March 19 in Brussels; hosted by the American Chamber of Commerce to the European Union – More Information

The Atlantic Summit on the Economy – April 23 in Washington; hosted by The Atlantic Live – More Information

The Next Round of TTIP Negotiations will take place in Washington the week of April 20.