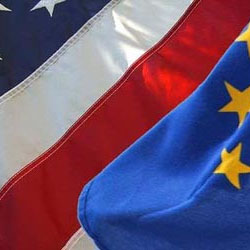 TTIP Action aggregates the latest news and best analysis from across the United States and European Union on the ongoing negotiations for the Transatlantic Trade and Investment Partnership (TTIP).

On behalf of the Atlantic Council and the Bertelsmann Foundation, it is my pleasure to invite all readers of TTIP Action to take part in an important survey assessing progress in the negotiations, analyzing your expectations for the conclusion of an agreement, and ranking the difficulty and importance of several key potential sticking points to the overall deal.You may remember that we released an initial report analyzing stakeholder expectations in April 2013 (available here).A year later–in the aftermath of the NSA scandal, and following the political stock-taking exercise between Ambassador Froman and Commissioner De Gucht last week–we would like to review how opinions among interested parties from the public and private sector on both sides of the Atlantic have shifted.Your responses will be kept strictly confidential, and we would like to sincerely thank you for taking five minutes out of your day to participate in our survey which you can find here.

Statement of the Ministers and Heads of Delegation for the Trans-Pacific Partnership Countries – February 25, 2014
Leaders from the Trans-Pacific Partnership negotiating countries issued a statement after four day Ministerial meeting in Singapore. The delegates cited that while some difficult issues remain, important strides towards greater market access were taken. ( See full statement here)

Making the most of Europe – the EU’s Common Commercial Policy as a Driver for Growth – February 21
European Commissioner for Trade Karel De Gucht called for greater economic coordination and trade between member-states, emphasizing that Europe’s Single Market remains an important driver of growth throughout Europe and a powerful incentive for the US to sure it follows through with TTIP negotiations. He also underlined that TTIP represents a clear path to strengthen Europe’s economy, and a key opportunity to help shape the rules of the 21st century global economy. ( See full statement here)

US Farmers Attack Europe on Trade Talks Impasse
Following Trade Commissioner De Gucht’s categorical statements against relaxing EU regulations on certain agricultural products–including hormone-fed beef and genetically modified foods–groups across the US farm lobby have threatened to come out against any trade deal that comes before Congress for approval. US Trade Representative Michael Froman echoed farm lobbyists’ concerns, noting the need for “comprehensive negotiations,” to include greater market access for US agricultural products. (Financial Times)

US Pushes for Greater Transparency in EU Business Regulation
As part of the ongoing TTIP negotiations, the United States is pushing for increased transparency in the manner in which EU regulations are drafted, with the hopes of giving businesses and public interest groups more opportunities to comment. Proponents argue that current EU regulatory process is too opaque, and that emphasis should be placed on allowing public consultations as proposals are drafted. (Financial Times)

EU Targets Buy America in Trade as Streetcar Maker Grows
Through TTIP the European Union is hoping to ease provisions that favor American suppliers for local, state, and federal contracts in the US. The move is supported by some major American companies, including General Electric and Caterpillar Inc., which view the restrictions as barriers to overseas growth. EU negotiators hope TTIP provisions will give their companies greater access to US procurement contracts. (Bloomberg)

TTIP Negotiations: Stock-Taking Summary
Kara Sutton of the Bertelsmann Foundation provides an insightful policy brief of the stock-taking exercise that occurred in Washington, DC on February 18, 2014 between Commissioner De Gucht and Ambassador Mike Froman, his US trade counterparts. It highlights key takeaways from the meeting, and potential sticking points which remain on the agenda. (Bertelsmann Foundation)

TTIP’s Effects on the Global Economy
Valbona Zeneli of The Globalist answers critics that suggest that an EU-US trade deal would jeopardize third party bilateral deals that the EU and US has with other countries. She argues that TTIP will serve as an important building-block and incentive for these countries to join the agreement on a multilateral scale further down the line. (The Globalist)

Memo to US Democrats on Upcoming Trade Deals
Robert Shapiro argues that lowering barriers to trade between the EU and US would inspire additional growth for US exporters and additional European foreign direct investment in the US–both of which would dramatically benefit US workers. ( The Globalist)

Taking Aim at Imports
The Economist provides a sober assessment of the high unlikelihood that either of the two major trade agreements on the table at the moment will be concluded this election year given strong Democratic pushback and their objective of keeping a handle on power in the Senate. (The Economist)

How to Make the World $600 Billion Poorer
This article argues that President Obama is partly to blame for the protectionist backlash in Congress, for failing to convince the American public and his Democratic colleagues that they will be losing a huge slice (up to $200 billion) of the expected $600 billion in global economic gains at stake through the conclusion of TTIP and TPP. ( The Economist)

Trade and Investment: A US and European Perspective – February 26 (More information)

Before and After TTIP, hosted by the University of Miami – Miami, FL – February 28 ( More information).

Round 4 of TTIP Negotiations in Brussels – March 10-14