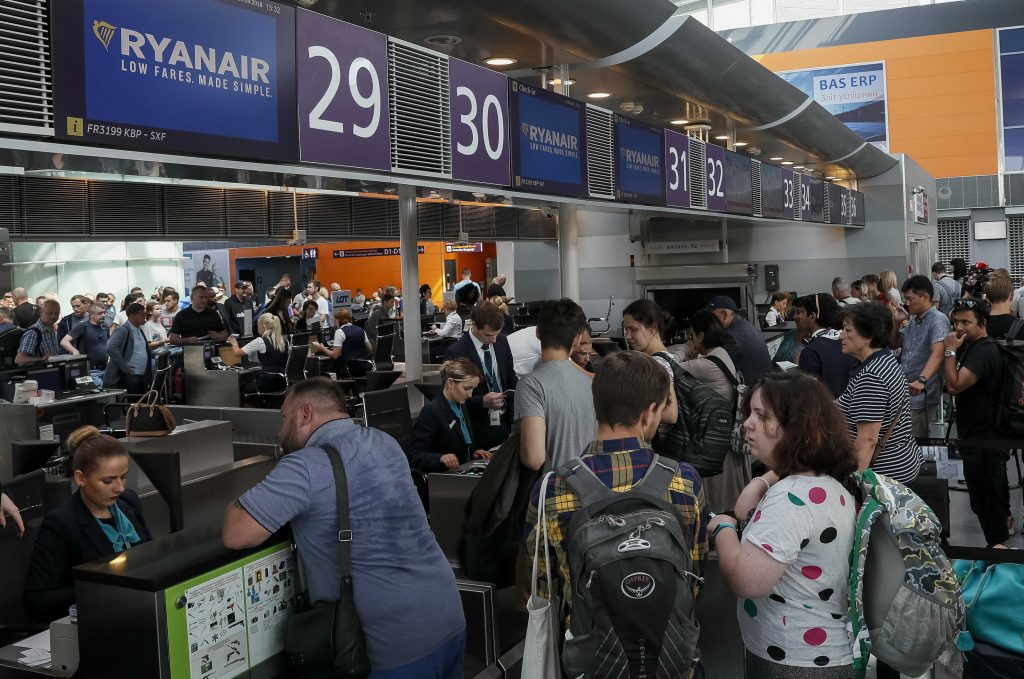 Ukrainians were granted the most residence permits of any non-EU nationals in the EU last year. Approximately 662,000 Ukrainians received such permission in 2017 alone. Ukrainians are now integrating into Europe at an annual number roughly equal to the population of Montenegro, an official EU accession candidate and new NATO member.

For hundreds of thousands of Ukrainians, European liberties such as the freedom to work legally and the ability to live long-term and sell their services in the EU are becoming reality. These rights include the right of residence for persons of independent financial means.

However, this type of European integration is still largely a one-way street. There is very little movement of people from the EU into Ukraine. One reason is that it requires a lot of paperwork for foreign citizens to acquire a Ukrainian residence and work permit. Ukrainian immigration policies are generally liberal toward applicants from Western states. Yet the cumbersome Ukrainian procedures to receive temporary or long-term residency permission require an effort that most EU citizens have become unaccustomed to. And then there’s Ukraine’s post-Soviet central bureaucracy. As a result, EU citizens taking up residence in Ukraine are rare.

While Ukraine is currently in the process of enshrining the country’s integration into the EU and NATO in its constitution, Ukrainian top officials continue to reiterate Ukraine’s desire for accelerated progress toward its full inclusion into the West’s major organizations. Yet Ukraine’s gradual incorporation into the West is not only dependent on Brussels’s assessment of how many EU and NATO standards Kyiv has implemented, but also a matter that Ukraine can foster itself, independently of Brussels, by modifying its policies and laws. It can do so long before Ukraine’s negotiations for its accession to the EU and NATO begin.

After the Orange Revolution, in 2005 Ukraine abolished visa requirements for short-term visitors from the EU and others. Twelve years later, the EU responded by allowing Ukrainian citizens to freely move, for short stays, within the Schengen Area. While the Visa Liberalization Action Plan leading to this long-awaited result was a project not only dependent of Ukrainian regulations for European citizens, Kyiv could point Brussels to its already liberalized travel for EU passport holders – and this helped it politically.

After this positive experience, it is time for Kyiv to take the next step for attracting Europeans to Ukraine, integrating the country with the EU, and preparing Ukraine’s accession to the EU. This could also concern citizens from the United States, Canada, Switzerland, Norway, Israel, and Australia. For economic reasons and out of Ukraine’s national interests, Kyiv should unilaterally grant all citizens of the EU and some other countries freedoms of movement of labor and services. This also includes the right to live in Ukraine as a person of independent financial means.

These freedoms and rights for Western citizens should be granted by a new law. The liberties should be framed in the same fashion as those that apply to people moving within the EU. That would mean that these freedoms could be enjoyed without any need to apply for residency simply by presenting a valid passport of an EU member state or similarly friendly country. There should be no bureaucratic procedure beyond registering one’s address. Such a simple registration should enable that person to start working as an employee in a Ukrainian company, to start a business, to study in a Ukrainian educational institution, to work as a freelancer and pay taxes, or to live in Ukraine as a pensioner.

Such a generous regulation would not only make life much easier for Western friends and Ukraine enthusiasts willing to move to the country. Adopting such a policy would also benefit Ukraine directly. The country currently loses hundreds of thousands of people every year due to a negative birth-death ratio and large-scale emigration. Thus, new residents from the EU and other friendly countries would help to soften the nation’s enormous demographic decline.

When moving in and out becomes an easy matter, this will mean more economic exchange with the West. More foreign direct investment would come as it becomes easier for entrepreneurs, managers, and entire companies to relocate from the EU to Ukraine. It can also mean more inflow of capital originating from the EU into Ukraine, as permissive residency and work regulations will make using it in Ukraine less complicated. Western citizens in Ukraine would demand from Ukrainian governmental offices, commercial companies, hospitals, public or private schools, and many other institutions attention, services, accountability, reliability and transparency, at the same level and of the same quality that they are used to from their home countries and thus contribute to improved standards.

Moreover, Westerners moving, for longer periods, to Ukraine would gradually change the country’s foreign relations and image. EU citizens living in Ukraine will mean more positive and realistic stories about Ukrainian matters communicated back to these citizens’ home states. More people from the West would visit their relatives and friends who live in Ukraine. These visitors too would contribute to a better image of Ukraine abroad.

More Western citizens living in Ukraine would also lead to more opportunities for Ukrainian citizens to practice and learn EU languages. It will demonstrate to many in the EU that Ukraine is a pro-European country that offers opportunities to EU citizens.

Finally, immigration from the West would have a security dimension as well. If thousands or even tens of thousands of EU citizens become residents of Ukraine, this will substantially increase the interest of their respective governments in the stability and development of the Ukrainian state. As entrepreneurs, specialists, students or pensioners from the EU settle across the country, this would make their and thus Ukraine’s security a higher priority for Brussels and the Union’s member states.

It is odd that Ukraine has not already taken such an easy and large step toward satisfying a range of its urgent national interests. To be sure, extended residency and labor freedoms would also create problems. Western immigration could, for instance, increase competition for certain categories of jobs, or contribute to a higher level of rents in top residential areas. One could imagine debtors or criminals from the EU trying to hide in a large European non-Union country with permissive residency policies.

Yet even these negative repercussions could have positive after-effects. For instance, Ukrainian and EU law enforcement agencies might have to cooperate much more closely, which would foster Ukraine’s European integration in the security sphere. While some Ukrainians would feel the pinch of higher competition by Western legal residents operating more easily on various Ukrainian markets, Ukraine’s economy would benefit overall.

Ukraine is in a difficult situation today. The urgency and extraordinariness of her challenges demands urgent and extraordinary solutions. Welcoming citizens of European and other friendly countries on its quickly depopulating territory is an obvious way for Ukraine to reduce or neutralize some of its most challenging problems. The Verkhovna Rada should waste no time in making this happen sooner rather than later.

Andrej Novak is an independent expert on Eastern and Southeastern Europe, foreign policy and security as well as European integration with Berlin-based European Cosmopolitan Consulting. Andreas Umland is a senior fellow at the Institute for Euro-Atlantic Cooperation in Kyiv, and general editor of the ibidem­-Verlag book series “Soviet and Post-Soviet Politics and Society” distributed by Columbia University Press.

Image: Passengers line up to Ryanair counters before the flight to Berlin at Boryspil International Airport outside Kyiv, Ukraine September 3, 2018. REUTERS/Gleb Garanich