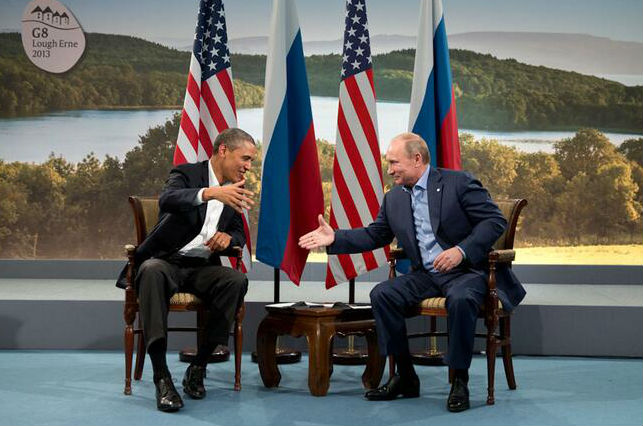 An odd thing happened on President Barack Obama’s way to New York for meetings at the UN with world leaders. He forgot to schedule a session with Ukrainian President Petro Poroshenko. Of course, New York City is flooded with world leaders at this time of year, and Obama does not have time to meet with all of them.

But the buzz this week is the arrival at the UN of Russian President Vladimir Putin, who has not deigned to attend the UN General Assembly opening in recent years. Putin’s presence is particularly interesting because of his recent decision to intervene massively in Syria, on top of his ongoing aggression in Ukraine’s east.

Despite the futility of previous contacts with Putin—and the utility of keeping him in isolation—the President is seeing him. The mere acceptance of the meeting is a gift to the Russian tough guy, whose minions are spreading the lie that the Americans requested the sit down.

While Obama may want to talk Syria with his Kremlin counterpart, Washington is putting out the word that Moscow’s war in Ukraine will be the principal topic of discussion. This is smart because the administration remembers the justified criticism Secretary of State John Kerry received when he called on Putin in Sochi last spring and devoted most of his time and subsequent press comments to Iran.
If Obama truly wants to emphasize Ukraine in his meeting with Putin, why doesn’t he find the time for a sit down with the President of Ukraine? One of the Kremlin’s tactics in its hybrid war in the Donbas is to seek a diplomatic deal over the heads of the Ukrainians—with the Germans and the French or the Americans. By seeing Putin to discuss Ukraine, and not devoting as much time to Poroshenko, Obama plays into that Russian ploy.

By meeting Poroshenko, Obama would achieve multiple objectives. He would underscore US support to Ukraine not only to the Kremlin, but to the 45 million people of Ukraine, who in the face of war and a severe economic slide need a shot in the arm. He would make clear that the government of Ukraine has the decisive voice in determining the diplomatic outcome to the war. He would bolster the embattled government of Poroshenko, whose poll numbers have dropped precipitously managing the twin security and economic crises.

Obama should also decide in the near future to visit Kyiv on one of his two planned trips to Europe later this year. He has yet to visit Ukraine as President and such a stop would demonstrate that the US will not permit the Kremlin’s aggression to succeed in Ukraine.

Image: US President Barack Obama and Russian President Vladimir Putin shake hands at the 39th G8 Summit in Ireland on June 17, 2013. On the sidelines of the UN General Assembly, Obama will meet privately with Putin but not Ukrainian President Petro Poroshenko. Credit: White House/Pete Souza