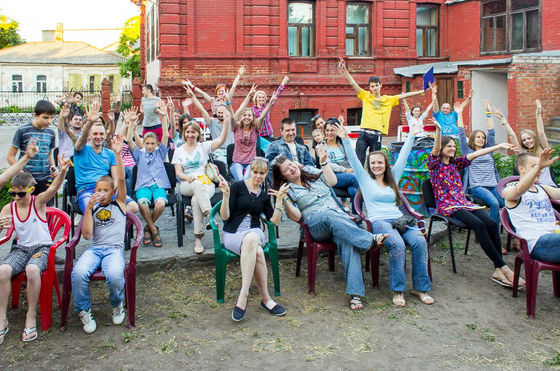 Editor’s Note: This piece is adapted from a speech Carl Gershman gave to the Ukrainian Catholic Education Foundation on October 24, 2015.

Preparing for tonight’s talk has been an unexpected process of learning and discovery. I had thought I understood Ukraine, having given a number of talks and written articles urging the US government to give greater support to the struggle being waged in Ukraine to build a democratic and lawful society that would join it to Europe and the West. I have said many times, quoting former Swedish Foreign Minister Carl Bildt, that Ukraine is “the epicenter of the global struggle for democracy.” I believe it still is, and that we should do whatever we can to help it win its two-front war to reform the economy and defeat Russian aggression in the east.

But what I learned in preparing for this talk is that there is another struggle going on, a moral and spiritual struggle to renew Ukraine and help it overcome the debilitating legacy of its Soviet past that manifests itself in a culture of mistrust and cynicism. It is a struggle that the Ukrainian Catholic University is quietly waging by nurturing a new generation of Ukrainians steeped in the values of community and individual responsibility and committed to building a free society based on shared values.

The first thing I learned in my process of discovery was that a young Ukrainian named Yuriy Didula, who had worked at the National Endowment for Democracy for a year before returning to Ukraine to work for the Lviv Education Foundation, was a graduate of the Ukrainian Catholic University (UCU). When I asked him what he was doing, he told me that he had helped recruit over one hundred volunteers to go to the city of Kramatorsk in the Donbas to work with local youth to rebuild homes destroyed by war, and to create a center for cultural activities called Freedom Home. It was, he explained, a welcoming community where young people who had grown up in a closed, post-Soviet space could network, exchange ideas, learn, and grow.

I was impressed with what Yuriy was doing and later mentioned it in an article as an example of the new spirit of voluntarism in Ukraine that had been spawned by the Euromaidan and the effort to respond to the humanitarian crisis in the east. Yuriy explained his work in an article, titled “Here’s Why I’m Hopeful About Eastern Ukraine,” which highlighted the Lviv Education Foundation’s work in Kramatorsk as well as the establishment in Slovyansk of a parallel “cultural bridge” called the Teplytsia (or Greenhouse) Platform. Like Freedom Home, it hosts famous cultural and public figures and helps them connect with young people in the east.

After I was invited to give this talk, I wrote to Yuriy, asking him to explain how his education at UCU had contributed to his personal development and to his commitment to building a new Ukraine. He immediately wrote back, saying that UCU is a different kind of university.

It “does not only focus on giving a good education,” he wrote, “but emphasizes…understanding one’s role in society. Therefore, for the UCU graduate, it’s a natural process to join the civic sector, a volunteer organization, or a religious order….UCU aims to nurture new leaders. And for us, a good leader is the one who can serve,” he wrote.

As it happened, Yuriy and I were both scheduled to speak at a youth summit in Sarajevo last week, so we arranged to meet there. Yuriy was joined by a close colleague, another UCU graduate named Ljubomyr Leshchuk, and I interviewed both of them for more than an hour, probing their understanding of their work and how they were influenced by their experience at UCU.

At the outset, they described the Ukrainian Catholic University as a “country inside a country,” an enclave of tolerance, trust, respect, and common values within a corrupt post-Soviet society. They mentioned a number of admired professors, including the Vice Rector, Myroslav Marynovych, but they attached special importance to the role of Bishop Borys Gudziak, the founder and President of the university. They said he was a role model for them in the way he interacted with the students and the respect with which he treated them.

“He communicated with everyone,” they said, “remembered the names of all the students, and never failed to know what they were doing or to ask how their thesis was going. His model of leadership was not top down, but horizontal. It was a model of the future Ukraine.”

I asked how their reconciliation work in the east had begun, and they said it had started seven years ago when they created a student fraternity at UCU committed to organizing exchanges with people from the east. They brought some two hundred young people to Lviv, and they would bring students from UCU to Odesa during the Christmas season, where they would go from house to house while acting parts of a stylized nativity play. This is the Vertep tradition that had been banned under Communism. By reviving it, they were also building a sense of community.

Then came the Euromaidan, the flight of Yanukovych, and the start of the war. They immediately knew that a long struggle lay ahead. Friends whom they had met during the earlier exchanges came to Lviv when their homes were destroyed, and in July, when Kramatorsk and Slovyansk were liberated, Yuriy, Ljubomyr and a few others organized a small reconnaissance visit to the east, after which they brought more students and started rebuilding homes.

Soon they had brought three hundred volunteers from Lviv and other parts of the country, renovated fifty homes, and started a permanent camp for the volunteers that evolved into the Freedom Home cultural center and later the Teplytsia Platform. Volunteers from Slovyansk used their vacations to join in rebuilding homes and taking part in cultural activities. When they needed to raise funds to cover expenses for dinners and speakers, they took a page from the UCU model of involving the local community by reaching out to businesses and others. There were benefits on all sides, they said, as “the businesses felt they were part of something new, and the youth felt that they were being supported.” They had created a community and had helped people see, as Yuriy and Ljubomyr put it, that “they can do new things in a new way, in a Western way.”

Yuriy and Ljubomyr have ambitious ideas for the future. They’ve already networked with two to three thousand young people and feel they’re now in a position to scale up: to expand the number of volunteer camps, use social media to exchange ideas and help people get to know one another, and organize conferences and retreats for training and strategizing. Their goal is to build a national youth movement based on shared values and a new spirit of service.

This goal has been advanced by something fortuitous: the announcement just two weeks ago that Svetlana Alexievich of Belarus had been awarded the Nobel Prize for Literature. Alexievich was born in the western Ukrainian city of Stanislaviv, now Ivano-Frankivsk, and the central message of her writing affirms the mission of the Ukrainian Catholic University, and is entirely consistent with Yuriy and Ljubomyr’s thinking. Her message is that post-communist countries like Belarus, Russia, and Ukraine will not become free and democratic unless the people of these societies free themselves from the destructive collective legacy of the Soviet past that lives within each family—and within young people, too, “even though,” as Alexievich says, “they might not have lived a single day under socialism.” In her view, as long as this collective memory of denunciations, gulags, forced collectivizations, and Orwellian inverted truths is not questioned, discussed, or dealt with, the post-Soviet person will be no more than “a mixture of prison and kindergarten.”

Alexievich also speaks about the weakness of civil society throughout the post-Soviet world, which she calls an empty world devoid of higher purpose and spirituality that is “overwhelmed with the material.” But she is not without hope. She believes that “new people are appearing with civic courage”—a “new generation with different ideas about everything.”

The Ukrainian Catholic University is helping to produce this new generation and to “search for” and “rescue,” as Alexievich puts it, the human being inside of each person it touches. It offers a different kind of education: learning that inspires young people and inculcates in them moral and spiritual values that serve as alternatives to what Alexievich calls the “new religion” of post-Soviet faith in materialism and consumerism.

The Ukrainian Catholic University is sending young people like Yuriy and Ljubomyr out into the world to change it, and they are doing so in a way that is purposeful, practical, and transformative. If they succeed in building a new Ukraine, their work will also influence the evolution of Russia and other countries in the post-Soviet region. That’s because Ukraine is the epicenter of the struggle for freedom in the region and in the world. It will be a long and difficult struggle, but it is not unreasonable to look to the future with hope.

Image: The Teplytsia Platform in Slovyansk, Ukraine, hosts famous cultural and public figures and helps them connect with young people in eastern Ukraine. Graduates of Ukrainian Catholic University in Lviv started the initiative. The Ukrainian Catholic University is quietly waging a moral and spiritual struggle to renew Ukraine and help it overcome the debilitating legacy of its Soviet past by nurturing a new generation of Ukrainians steeped in the values of community and individual responsibility. Credit: Teplytsia