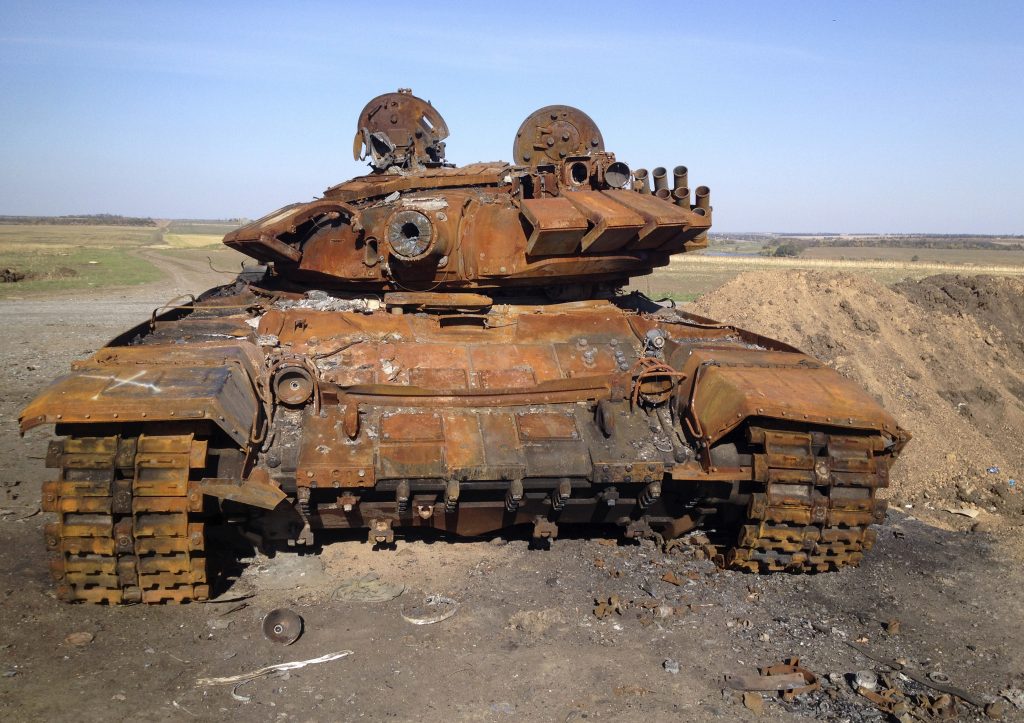 As Ukrainians elect a parliament this weekend, new evidence pops up of Russia’s military role in their country: Western journalists this week found destroyed Russian tanks in Donetsk—and very live (if somewhat drunk) Russian soldiers happy to socialize at one of the last cafés still open in Lugansk.

“You didn’t see us here,” a uniformed officer named Slava tells the reporters as they leave, a bottle of vodka under his arm. And indeed the Russian army regulars in Lugansk operate in the background, leaving locals or imported Russian volunteers to the more visible roles, according to journalists Courtney Weaver and Max Seddon.

The proof of Russia’s decisive tanks-and-infantry offensive into Ukraine in August already is deep: Russian troops captured by Ukraine in Donetsk province; the soldiers killed in battle and secretively buried back home in Pskov and other Russian towns; the videos shot by (Russian) residents of Russian border towns of artillery rockets volleyed into Ukraine; the Russian soldiers’ stories and photos of their Ukraine battles, posted on Russian social media sites.

Still, the Russian government denies these facts (with the acceptance of some commentators in the West), so it’s relevant that new layers of evidence keep trickling out. Yesterday, Reuters reported new forensic discoveries at the site of August’s decisive battle, near the villages of Horbatenko and Ilovaisk.  It photographed burned-out tanks rusting in the fields, and had them analyzed by multiple armaments experts who identified a couple of them as variants of the T-72 model used only by Russia’s army and never exported to Ukraine.

Russian troops removed the usual identifying marks from the tanks that invaded and replaced them with identical white circles painted on their turrets, marks that remained visible on one destroyed armored vehicle out on the battlefield, write Reuters reporters Maria Tsvetkova and Aleksandar Vasovic. The reporters also describe finding 124 packs of daily food rations used only by the Russian army, and leftover bottles of water manufactured in Ivanovo, the home province of the 98th Guards Airborne Division, which had joined the battle.

At the Weeping Willow café in Lugansk, a Russian soldier from Voronezh named Maxim, with his five buddies, generously invites reporters Courtney Weaver (a New Yorker based in Moscow for the Financial Times) and Max Seddon (reporting for Buzzfeed) to join them over vodka. Maxim is a little vague about the troops’ mission in Lugansk. They are “training the local population,” he says.

The journalists wonder whether the soldiers volunteered for this duty or were ordered to Ukraine. Maxim, who clearly has a sense of humor, explains:  “They gave us an order,” he says.”‘Who wants to go volunteer?’”

As Lugansk’s 8 p.m. curfew ends the evening, another soldier, Salovat, proclaims to Weaver, “A million men will die for your eyes!”

The soldiers, plus Russian volunteer fighters whom Weaver meets in a coffee shop, are reminders that Russia is keeping its war-making options wide open in Ukraine—including possible offensives in the southeast, as announced yesterday by Donetsk rebel leader Aleksander Zakharchenko, or across Ukraine’s south, to seize a land route to Crimea.

The Russian government is keeping those war options open largely by suppressing news within Russia of the presence of its troops in Ukraine. Police in the southern district of Stavropol have arrested Lyudmila Bogatenkova, the chairperson of a local Soldiers’ Mothers Committee, the newspaper Novaya Gazeta reported this week. Bogatenkova, 73 and diabetic, uncovered and publicized the deaths in August of nine soldiers from the Chechnya-based 18th Motorized Rifle Brigade, saying they had been killed in Ukraine. Russian news accounts have quoted her as saying hundreds of troops from southern Russia had been killed or wounded. Russian news media cited officials as saying she had been arraigned for fraud. (The Soldiers’ Mothers’ Committee of St. Petersburg was forced to register as a “foreign agent” after it also reported more than 100 Russian troops from that region killed in Ukraine.)

Image: A burned, Russian-built T72 tank rusts on a battlefield of Donetsk province amid other armored vehicles, weapons and military equipment from Russia. The tank, a model used only by Russia’s army, is left from the Russian forces’ August invasion of southeast Ukraine to save Russian proxy forces from defeat by Ukraine's army. Russia’s government has dismissed all evidence of its military role and its sponsorship of the rebels. (Reuters/Maria Tsetkova)