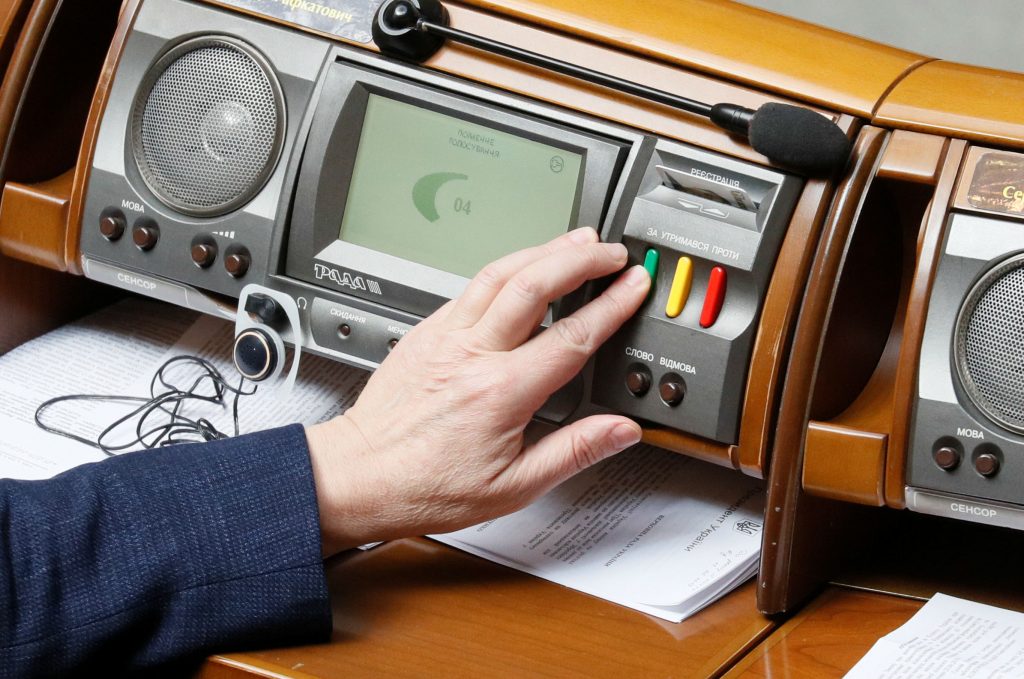 A member of the Ukrainian parliament votes during a session to set a date for the inauguration of President-elect Volodymyr Zelenskyy in Kyiv, Ukraine May 16, 2019. REUTERS/Valentyn Ogirenko

With the culmination of the electoral season in Ukraine, there can be no doubt that voters pronounced a severe judgement on the country’s political class and culture which failed to fulfill the promises of the Maidan.

Expecting reform these last five years was dominated by a spirit of hopeful cynicism; nonetheless Ukrainians rejected the inadequacy of this approach and voted this time with an idealistic attitude for expectant transformative change, giving both an overwhelming executive and legislative mandate to a new and unproven generation of politicians.

These were “change” elections in the most dramatic sense, a result of a free, fair, and competitive electoral process.

In so doing, Ukrainians, for the first time in their modern history, defeated and transcended their entrenched elites and oligarchic influences to provide a clear governing mandate for the country, effectively asserting their democratic sovereignty and prerogative.

In one way, they also provided a lesson for interpreters of Ukraine, many of whom remain anchored to an outdated national narrative and understanding of the Ukrainian people. That lesson being that the governing authorities must now respond to the demands and expectations of the greater electorate that is most interested in economic opportunity and overall societal justice.

Nonetheless, it would be a grave mistake to believe that the power and influence of oligarchs has become ineffectual, or will be in the immediate future. A battle has been won by the people of Ukraine, but the fight to free the country is far from over.

There must be no doubt that the new parliament must be inspired to enact a transformative legislative framework that would establish a “promise society” respecting individual dignity.

The chief aim of this parliament must be to comprehensively deconstruct the remnants of the old Soviet and corrupt oligarchic order, and especially monopolies, be they in the legal, financial, social and economic spheres.

The philosophical and legal objective of the new parliament must be the application of a “destroy/create” paradigm to get rid of archaic and non-democratic laws while establishing an efficient rule of law system.

This must begin in the parliament.

The democratic forces in the legislature, most notably Sluha Narodu and the Holos parties with a combined majority of more than 270 seats (which is close to a constitutional majority), must propose and enact by years end, a package of laws that would both symbolically and legislatively transform the Rada’s cultural practice and tradition. This must be done aggressively, without moral compromise, and with parliamentary precision.

This comprehensive package of laws must eliminate parliamentary immunity. Next, as promised during the election by Sluha Narody, a process for impeachment of the president must be enacted.

Further, strict conflict of interest legislation regarding parliamentarians must be put in place. These models and practices could be inspired by countries like Canada or even more locally, by the Kyiv city council. They should include not only more detailed financial disclosure, but also more detailed disclosure of business interests and partnerships. Also, more stringent guidelines should be in place as to who can work as parliamentary advisors.

An independent parliamentary ombudsman also must be created. An officer of parliament would oversee the application and compliance of new legislation affecting the finances of members and impose disciplinary measures on those that transgress.

Following Canada’s model, the office should also set up a mechanism that would deal with complaints and grievances from the public regarding any bad behavior of parliamentarians and this office would report directly to parliament. This effort toward public transparency would ensure a more rapid response and set an example of personal responsibility and accountability, rather than seeking legal remedies through susceptible courts.

The office should also initiate an all-party effort to establish a code of ethics to govern the behavior of parliamentarians, seeking guidance from parliamentary experts from Canada, Australia, and the UK.

Ukraine’s western parliamentary partners must commit to playing an extensive advisory role in seeing that such a legislative effort will succeed. They must provide expert parliamentary advice, lending parliamentary officers from their countries on a short-term basis to aid their Ukrainian counterparts, in addition to encouraging fellow parliamentarians, retired or still in active service, to aid in the writing of such legislation.

Passing such legislation in the early days of a new parliament would be a monumental achievement. It would at once establish the parliament’s credibility further solidifying the confidence of the electorate in its chosen democratic path.

This legislative package of reforms has the potential strength to severely curtail members’ blatant and corrupt practices. If the proposed magnitude and scope is realized, it will have established a new governing tradition for Ukraine’s legislative class and may well prevent future backsliding and a return to the old ways.

Yuri Polakiwsky is a Kyiv-based writer and author of “Ukraine – A Lament of a Promise.”