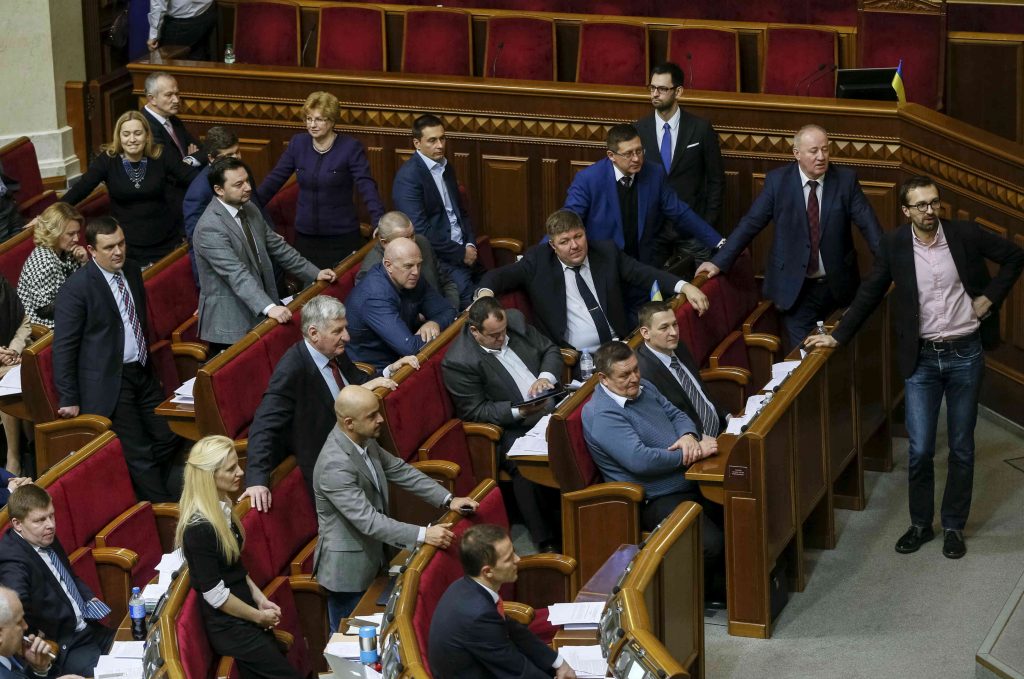 Ukrainian deputies attend a parliament session in Kyiv, Ukraine, February 16, 2016. A junior ally in Ukraine's ruling coalition quit on Wednesday, calling the alliance a "facade" and demanding an overhaul of the way the country was run. "Yesterday extraordinary events took place in parliament," party leader of the Fatherland faction Yulia Tymoshenko said, urging other lawmakers to walk out of the coalition as well. The announcement came just a day after Prime Minister Arseniy Yatsenyuk survived a no confidence vote in parliament. REUTERS/Gleb Garanich

On February 16, the Ukrainian parliament deemed the performance of its government unsatisfactory with 247 votes, but only 194 parliamentarians voted for a no-confidence measure. The government did not fall as some had expected. Overtly, this strange vote may appear a victory for President Petro Poroshenko, but it seems a Pyrrhic victory that may have broken the ruling coalition in parliament and brought Ukraine closer to early elections.

Earlier in the day, Poroshenko called for the resignation of Prosecutor General Viktor Shokin, his close ally, and Prime Minister Arseniy Yatsenyuk. Shokin did submit his resignation, but he seems to have gone on holiday as is a common Ukrainian habit. (Ukraine’s outdated labor laws prevent public officials on sick leave from being fired.)

Yatsenyuk made a grand speech in parliament on the achievements of his government, probably his best ever. Watching him on the web, I did not see a doomed man. He looked as if he had made a deal, although one parliamentarian after the other criticized the government, mainly the most reformist ministers.

By calling for the prime minister’s resignation, Poroshenko initially appeared to have strengthened his control over the government. Poroshenko realized that he had to give something to western donors, so he finally let Shokin go and adopted an excellent law on privatization long desired by western donors. Yet he is set to keep Ihor Kononenko, his long-time business partner and gray cardinal, who is considered to control many valuable state corporations. However, the cost of keeping him is likely to be considerable.

In immediate hindsight, this dramatic day appears to have offered sheer theater. The fifty-three swing votes between the two votes on the government came mainly from two party factions, the Opposition Bloc and the Poroshenko Bloc, and the swing voters are predominantly big businessmen.

The reformist members of the Poroshenko Bloc, who voted for the ouster of the Yatsenyuk government, and the smaller coalition partners feel that they have been duped. Odesa governor Mikheil Saakashvili called it an “oligarchic coup” and encouraged honest ministers to resign. Poroshenko Bloc MP Sergii Leshchenko labeled it an “oligarchic counterrevolution” and a “conspiracy.” He blames the three big businessmen Ihor Kolomoisky, Rinat Akhmetov, and Serhiy Lyovochkin, who have substantial representation in parliament.

This parliamentary coup is not likely to fly. A first consequence is that the ruling coalition is falling apart. The Radical Party of Serhiy Lyashko has already left the five-party coalition. On February 17, Yulia Tymoshenko’s Fatherland Party departed, and Self-Reliance is about to leave. These departures will leave the coalition with only 136 deputies from the Poroshenko Bloc and eighty-one from Yatsenyuk’s Popular Front, which amounts to only 217 deputies, while 226 is required for a parliamentary majority. Moreover, these two factions voted against one another on February 16. The vocal reformers in the Poroshenko Bloc have already formed a subgroup within the party and are likely to depart.

Poroshenko and Yatsenyuk might be able to lure the Radical Party back and gain support from three smaller oligarchic parties outside the coalition, but doing so would confirm that they instigated the coup and undermine their reputation among voters. The natural consequence would be that the government falls apart prompting early parliamentary elections, for which Fatherland and Self-Reliance are campaigning.

Economically, Ukraine cannot afford to play these political games. Although the economy has stabilized and grown in the last two quarters, it remains fragile. The Ukrainian hryvnia is under severe pressure and has fallen by 12 percent in the last two weeks because of political uncertainty.

Help may be around the corner. The International Monetary Fund (IMF) is ready to disburse a new tranche of $1.7 billion, as soon as it can be convinced that Ukraine has a responsible government. An IMF mission carried out a second review in late November and found great fiscal performance, but it waited for the parliament to amend the tax code and adopt a new budget before disbursing the next tranche. The Rada did so on Christmas Eve, but then the Poroshenko Bloc called for major government changes, and Kononenko ousted four reformist ministers.

When Economy Minister Aivaras Abromavicius resigned on February 3, he did so to protest Kononenko’s efforts to exert control over his ministry. Abromavicius accused Kononenko of attempting to appoint two deputy ministers of economy to control financial flows from state corporations in energy and armaments.

The IMF could not responsibly disburse any funds if Ukraine was about to get a new government that might not be committed to the IMF program. When the next IMF tranche is disbursed, the United States will provide a third loan guarantee of $1 billion, and the European Union another tranche of $650 million. Altogether, Ukraine would get credits of $4 billion in one go.

The country badly needs that funding. On February 1, its international currency reserves amounted to $13.4 billion, which is a great improvement from $5 billion one year earlier, but the IMF calls for a minimum of $17 billion, which Ukraine would have with the new tranche. Meanwhile, the hryvnia exchange rate remains shaky. After this drama, it will be difficult for Ukraine’s leaders to convince their international supporters that they are serious about fighting corruption.

The main consequence of this political drama appears to be a weakening of Poroshenko’s authority for having unleashed this political crisis. It is difficult to see how he can repair the situation, and the default outcome is a government crisis followed by early parliamentary elections.