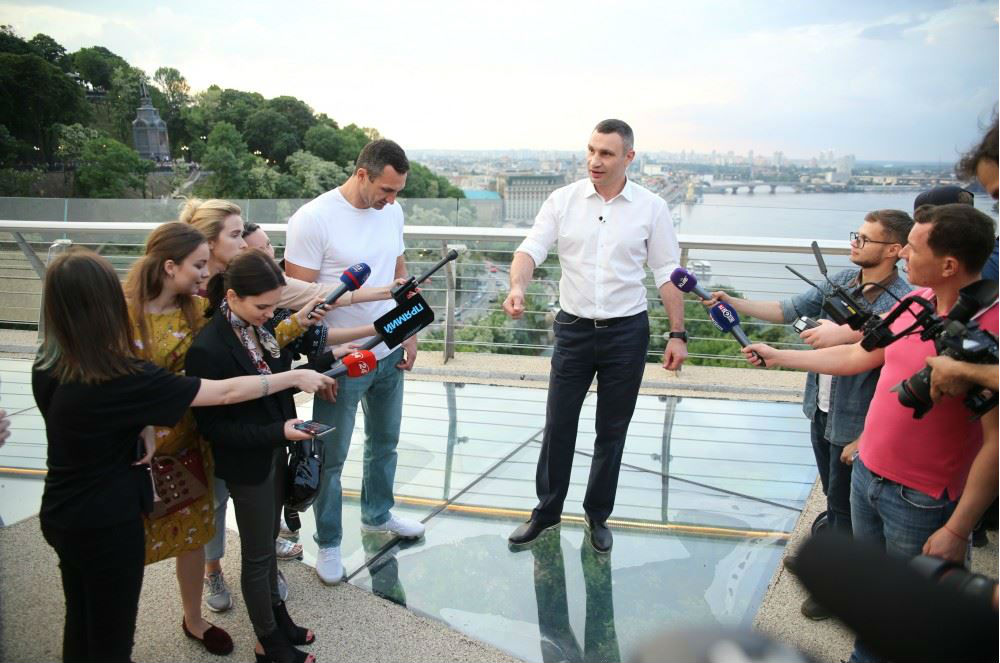 On May 25, Kyiv Mayor Vitaly Klitschko and his brother open a new pedestrian bridge in Kyiv, Ukraine. Credit: http://kiev.klichko.org/

On May 25, Kyiv Mayor Vitaly Klitschko and his brother jumped up and down on a smart, new glass bridge in Kyiv, Ukraine. The video went viral and thousands crowded the pedestrian bridge that connects Volodymyr Hill with Khreschatyk Park. Destined to become one of the most popular attractions in the city as a result of its prime location, magnificent landscape, and modern design, the bridge is already starting to show signs of wear. Ironically, the new panorama opens to a less celebrated bridge that puts the safety of millions in jeopardy. It’s one that the mayor and Kyiv City State Administration have ignored. To its right, the metro bridge across Rusanovsky Strait connects the left and right banks of the city. Millions use it daily to move from home to work. Experts found that the bridge needs to be closed immediately.

The new bridge is not merely a tourist attraction but also an indictment of the mismanagement of Kyiv City State Administration executives.

Only two years have passed from the moment the construction plan was heard until when it was finished. The number of days it took to actually build the object is even more impressive. It took 186 days from start to finish—and this includes the time it took to allocate the funds, employ a contractor, purchase materials, revise project documentation, and strengthen embankment slopes. Considering the New Year’s, Easter, and May holidays that tend to prolong similar administrative procedures for months or even years, this timeframe raises eyebrows.

I’ve never seen a project move this quickly. The reconstruction of the staircase and retaining walls in front of 25 Khreschatyk Street lasted for two and a half years. These objects would still be half-destroyed and covered by the plastic sheeting if it weren’t for the Real Madrid vs. Liverpool match held at the NSC Olimpiyskiy Stadium. After postponing repair work for more than two years, Kyiv officials finally ordered municipal workers to repair the staircase before the 2018 UEFA Champions League Final.

But let’s look at this story from a pragmatic standpoint.

Over the years, some of the bridges were renovated or repaired if needed, but a systemic review of the condition of Kyiv’s bridges was not conducted until the “tired bridge” collapsed in February 2017. Only after this accident was an assessment of the technical condition of bridges ordered.

In March 2017, other structures were assessed to see if they might collapse soon. The report from the experts was shocking.

The report determined the condition of each of the 169 bridge structures using a five-point system where “1” meant “no threat” and “5” indicated that the object should be closed for immediate repair. Three bridges were rated “5,” 63 bridges were given 4 points, which, according to the national building code, meant that their capacity was very limited.

In response, the city council urgently allocated 30 million hryvnias to study the 63 bridges that were rated “4” in June 2017. Even then, it was clear that many structures been rounded down to a “4” and the city’s bridges were in a terrible state.

In January 2018, another assessment of the bridges was completed, and according to the experts, 95 bridges demanded special attention from the city authorities. Twenty-five bridges in Kyiv were recognized as “unusable,” 46 bridges were said to be “structurally deficient,” and only 20 were “in good condition.”

In other words, there are at least 70 bridges and footbridges in Kyiv that require urgent, major repairs. Whether this is a large or a small number is not a rhetorical question. Quite a few of these bridge structures are important arterial roads of the city used daily by millions. Some of the examples are four out of five functioning automobile bridges that cross the Dnieper river, including the metro bridge, the Paton bridge, and the Northern and Southern bridges.

The repair of all bridges in dire condition in Kyiv is an overwhelming task that would require billions of hryvnia, smart strategies, years of work, high-quality experts, projects, resources, and equipment. Today, the city faces dramatic transportation challenges that need to be addressed immediately. And the response of the mayor and his team to these challenges is the rushed construction of a 420 million hryvnia bridge from which any interested resident of Kyiv will be able to observe the collapse of bridge infrastructure in the capital.

Such reaction to the issues facing the city is disturbing. Even if we ignore all aesthetic, cultural, environmental, legal, and financial nuances surrounding the new pedestrian bridge, it does not solve any of the existing critical transportation problems in the city. It does not help Kyiv residents get to work or home, take children to school, nor does it help ambulances and firefighters get to their destination faster than before. All of these are major issues in Kyiv.

Of course, the mayor needs victories, smiles, nice pictures, and social media likes. Moreover, I have no doubt that new Klitschko’s selfie-bridge will become a nice recreational space where people will spend their free time and the mayor will take new visitors during city tours. It’s just that while admiring the panorama and choosing the right angle for your selfie, it might be worth remembering that somewhere in Kyiv the last beam that holds together one of city’s 70 bridges is starting to crack.

Editor’s note: The article was translated from Ukrainian into English by Yevheniia Dubrova.