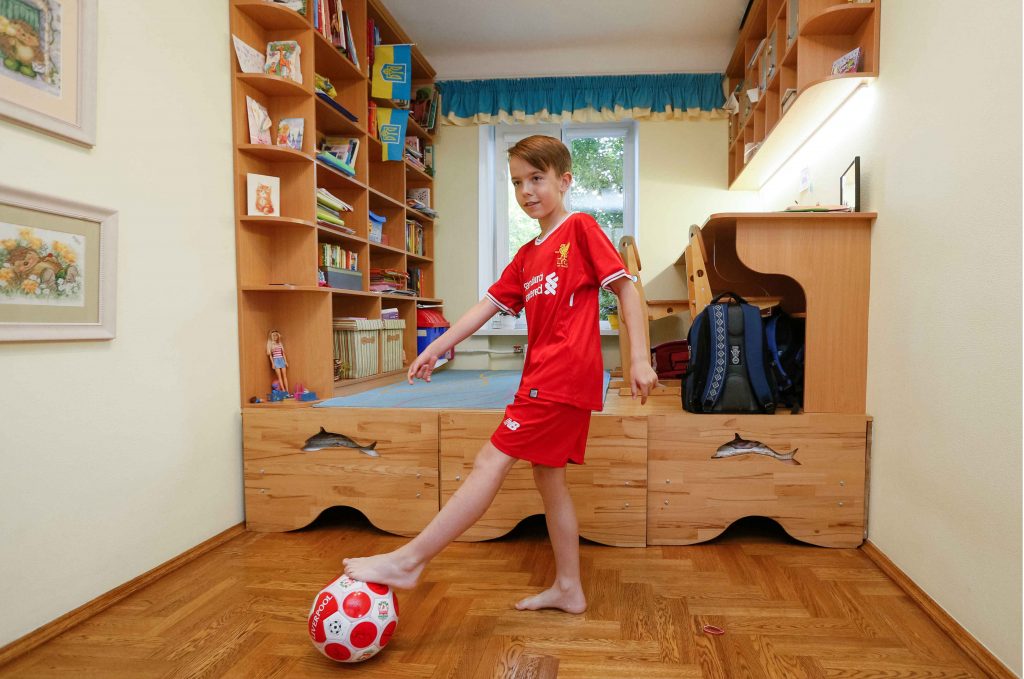 Kyiv’s preparations to host the 2018 Champions League Final on May 26 have been something of a rollercoaster ride that has highlighted the very best and worst of Ukraine. The international media buildup to the big match began with a flurry of negative stories criticizing Ukrainian hoteliers and apartment rental services for inflating prices to astronomical levels. Absurd increases of 1000 percent and higher risked pricing fans out entirely and turning the prestige event into a complete farce. However, by May 10 the UK’s Daily Mail newspaper was positively jubilant as it reported, “Liverpool fans rescued by Kyiv locals after Champions League hotel price hike.” Elsewhere, Reuters added to the optimistic mood with the memorable headline, “Ukrainians offer Champions League fans free bed and borscht.”

The sudden change was due to an online initiative launched by Kyiv residents who responded to evidence of price-gouging tactics by inviting football fans into their homes. Ordinary Ukrainians were soon signing up for this social media campaign in droves, offering to accommodate Liverpool and Real Madrid supporters free of charge and capturing the imagination of international audiences in the process. As more and more foreign fans made contact with their future Ukrainian hosts, the compliments flew thick and fast. “What a warm wonderful gesture from the people of Kyiv and Ukraine,” read one typical comment on the popular Liverpool Echo website. “What you are doing shows that humanity still has hope,” offered a Spanish journalist in a post to the initiative’s official “Kyiv FREE Couch” Facebook page. What had looked like a looming PR disaster for Ukraine was instead shaping up to be a memorable demonstration of the country’s infinite ability to inspire fresh optimism and faith in human nature.

Many have reacted to the generosity of Kyiv residents with amazement, but perhaps we should not be so surprised. It is hard to imagine any other citiy in Europe where ordinary folk would consider opening up their homes to complete strangers, but when it comes to the Ukrainian capital such behavior is actually nothing new. During Ukraine’s two post-Soviet revolutions, thousands of Kyiv residents happily gave protesters a place to sleep, with many even ferrying groups back and forth from Maidan Nezalezhnosti (Independence Square) to their apartments in order to provide them with a chance to shower and enjoy a hot meal. Those who offered accommodation and basic amenities to protesters played an essential part in the vast volunteer movement that made possible both the 2004 Orange Revolution and the 2014 Revolution of Dignity. Without the sustained support of so many Kyiv residents, neither movement could have maintained the necessary momentum over an extended period.

This spirit of volunteerism played a decisive role once again when Russia invaded in spring 2014. With the threadbare Ukrainian army in a state of disarray and advancing Kremlin forces openly declaring their intention to partition the country, salvation would depend on a nationwide wave of community mobilization that succeeded in building a patchwork fighting force virtually from scratch. Many of those who marched off to the frontlines of eastern Ukraine in April 2014 were veterans of the Maidan barricades, while those who had worked to provide support throughout the long winter months of the Maidan now turned their attention to crowd-funding everything from body armor to basic medical supplies. Meanwhile, the almost two million Ukrainians fleeing Russian occupation in the east of the country received offers of temporary shelter in towns and cities across the country. In what was to prove Ukraine’s darkest and finest hour, nobody waited for the state.

Providing free bed and board to visiting football fans does not warrant direct comparison with these momentous moments, of course. Nevertheless, there is something of the Maidan magic in the selfless and resourceful response of ordinary Ukrainians to unscrupulous Champions League price gouging. It is one more example of the Ukrainian population’s readiness to rally against arbitrary injustice. In typical Kyiv fashion, they have chosen to do so by relying on their own resources rather than expecting a dysfunctional establishment to provide solutions.

Ukrainians have acquired this attribute through painful experience. In many ways, it reflects poorly on Ukraine’s post-Soviet state-building efforts, illustrating the lack of effective institutions capable of regulating anything from the basics of democratic governance to the pricing policies of the country’s hospitality industry. In this sense, it is a stark reminder of independent Ukraine’s well-publicized shortcomings. However, it also points to the resilience of Ukrainian society and the spirit of solidarity that has kept the nation afloat against seemingly overwhelming odds.

This state of affairs cannot last indefinitely. At some point, the Ukrainian state must rise to the challenge and fill the many gaps plugged by volunteer zeal and civil society muscle. The process is already underway in areas such as the military, which is now unrecognizable from the ragtag battalions of summer 2014. It urgently needs to spread to other areas of government if Ukraine wishes to move beyond the crisis management stage of nation building.

For the time being, the willingness of ordinary Kyivites to welcome visiting football fans into their homes has succeeded in shedding light on a side of Ukrainian society that international audiences might otherwise rarely encounter. In an era of deliberate disinformation and fake news, the shameless price hikes and unprecedented hospitality of Kyiv’s Champions League preparations have allowed the world to come face to face with the authentic Ukraine, warts and all. It is a country where far too many businesses still feel they can act with impunity, but is also a place where ordinary people are prepared to go to extraordinary lengths to help one another.

Image: 11-year-old Misha shows the apartment where his family will host fans traveling to see the Champions League final game between Real Madrid and Liverpool, in Kyiv, Ukraine, May 10, 2018. REUTERS/Valentyn Ogirenko