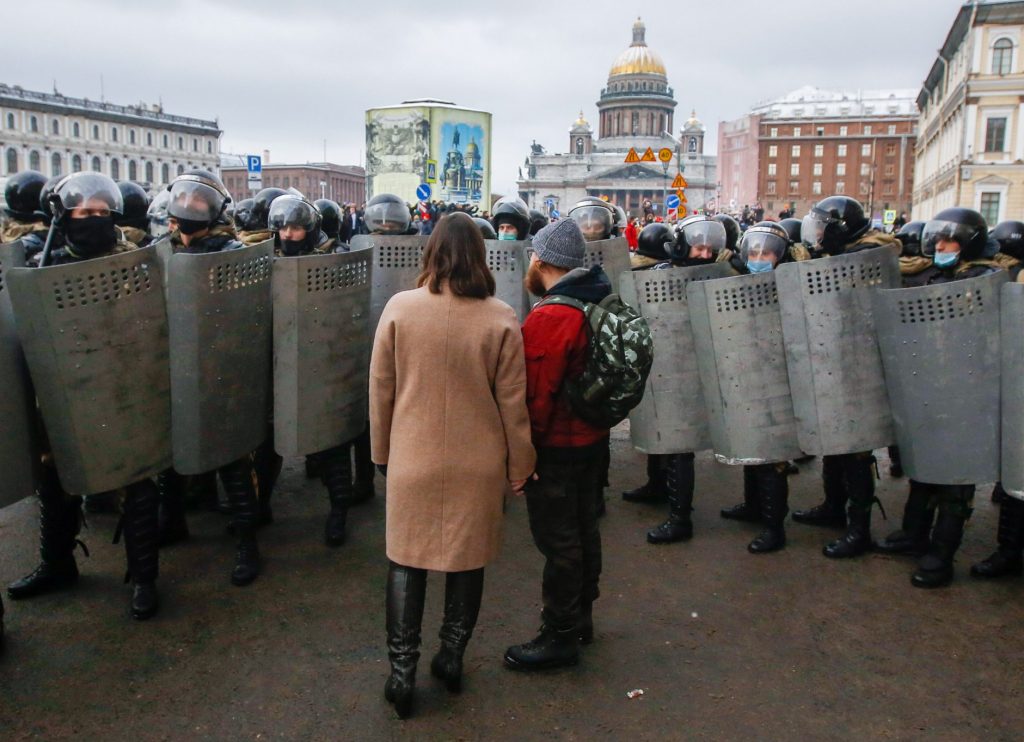 “Human rights is going to always be on the table, I told [President Putin]. It’s not about just going after Russia when they violate human rights. It’s about who we are. How could I be the President of the United States of America and not speak out against the violation of human rights?”

In June 2021, US President Joe Biden faced reporters on the manicured lawn of the Villa La Grange in Geneva and re-committed the US to a relationship with Russia which placed human rights at its core. He pledged that the US will “raise issues of fundamental human rights because that’s what we are, that’s who we are.”

The US President’s meeting with Putin and subsequent press conference followed American re-engagement with the UN Human Rights Council months earlier. During the Council’s session, the US joined a statement signed by 45 states drawing attention to the deteriorating human rights situation in Russia, manifested at that time by the arrest and imprisonment of opposition figure Alexei Navalny.

Perhaps more importantly, the statement’s signatories called on Russia to respect its obligations under international human rights law and, as a member of the Council, to uphold the highest standards in the promotion and protection of human rights.

Due to the efforts of the Russian authorities to criminalize human rights work, there has never been a more dangerous time to be a human rights defender or dissenting voice in Russia.

In the last decade, the Russian government has steadily and strategically tightened the noose around independent civil society and human rights defenders. Peaceful protest is effectively banned. Freedom of association has been almost completely eroded through the establishment of draconian laws targeting NGOs. Independent media outlets have been shut down and journalists targeted through the misuse of anti-terrorism legislation. Human rights defenders face an ongoing campaign of harassment, intimidation, physical attacks, smear campaigns, arbitrary detention, and prosecution.

The Russian authorities are not just targeting independent civil society and human rights defenders. Under a 2015 law which was expanded this year, the Kremlin is also targeting international human rights organizations by assigning a so-called “undesirable” designation and banning their work in Russia. This makes it illegal for any Russian organization or individual anywhere in the world to work with these groups.

Nevertheless, brave men and women across Russia continue to document, report, and challenge human rights violations. They do so despite the incredible risks this involves. Even those seeking to expose historic human rights violations by the Soviet authorities continue to conduct research despite a coordinated campaign of human rights abuses against them. It is past time for the US to stand shoulder-to-shoulder with these individuals and organizations, fully recognize the scale and scope of human rights abuses in Russia, and use international bodies to hold the Russian authorities accountable.

As the Human Rights Council convenes this week in Geneva, the Biden Administration has the opportunity and responsibility to take up the mantle of leadership at the UN’s apex human rights body. Privately, member states recognize the worsening situation of human rights in Russia and are prepared to assume their responsibility for addressing it. But American leadership will be critical.

Since it rejoined the Council in an uncontested election in 2020, Russia has tried to thwart action on everything from Belarus to Hong Kong. However, Russian influence on the Council is often overestimated. When it faced a challenger for a seat on the Council in 2016, it lost. Russia regularly loses votes on the Council when it offers amendments to weaken resolutions, as it did on every amendment it proposed during recent debates on Belarus. There is a leadership vacuum on the Council regarding Russia and it is this vacuum the US must address.

In the short-term, at HRC48 the US must lead on a joint statement which cites the worsening situation for human rights defenders and organizations in Russia, highlights the need for scrutiny of Russia’s human rights record by the Council, and warns of more formal action on the part of the Council if immediate action is not taken by Russia to reverse the country’s alarming human rights trends. Individual states and the international human rights community are ready to support such urgent and timely action.

Expanded engagement by the Biden Administration must also include a longer-term strategy for responding to Russia at the Human Rights Council. Such a strategy should reflect an intention to pursue the use of formal accountability mechanisms under the UN Human Rights Council, should Russian continue to ignore calls to cease human rights violations.

The Biden Administration must expand the use of sanctions against individuals at all levels of national and sub-national government responsible for human rights violations. It must offer visa support for human rights defenders and their families facing immediate threats, and back the use of other multinational bodies, such as the OSCE, to apply further pressure on the Russian authorities to stop their attacks on independent civil society and human rights defenders.

President Biden took an important step in Geneva towards supporting Russian human rights defenders. His Administration must now follow this up with concrete action.

Dave Elseroad is Head of Advocacy at the Human Rights House Foundation.