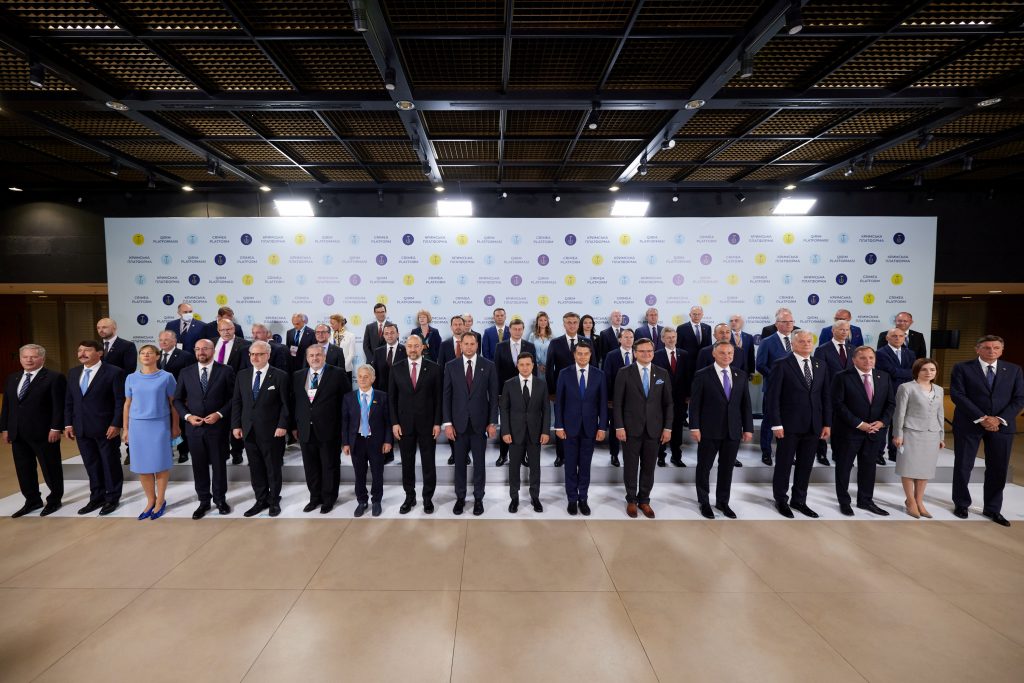 Senior officials from 46 nations and international organizations including NATO and the EU gathered in Kyiv on August 23 for the inaugural Crimea Platform summit. The initiative is part of Ukrainian efforts to return the Russian occupation of Crimea to the international agenda and increase diplomatic pressure on the Kremlin.

More than seven years since Russian troops first shocked the world by seizing control of the Ukrainian peninsula, the ongoing occupation is no longer a key focus of global attention. However, Kyiv hopes the Crimea Platform can serve to generate renewed interest in the issue and consolidate international efforts towards ending the occupation.

Attendees of the inaugural event in the Ukrainian capital signed a declaration that explicitly rejects Russia’s occupation of Crimea and calls for a continuation of sanctions, while also highlighting the need for greater human rights protection for those living in occupied Crimea.

“We succeeded in bringing Crimea out of oblivion,” comments Ukrainian Foreign Minister Dmytro Kuleba in an interview with the Atlantic Council following the summit. “Crimea had been in danger of becoming a forgotten issue internationally and this played perfectly into Russia’s hands. For the past seven years, Russia’s strategy has relied on the world forgetting about Crimea and accepting the new reality. So the key accomplishment of the Crimea Platform summit was to bring the occupation of Crimea out of the shadows.”

Kuleba is keen to highlight practical progress made at the inaugural Crimea Platform summit and points to what he terms as a “strong” Crimea Platform Declaration signed by all attendees. According to Kuleba, this sets out a clear road map towards future actions and significantly complicates Russia’s continued occupation of Crimea.

Another notable development to emerge from the summit was the designation of a specific government official or minister from every participating country who will now have responsibility for issues related to the Russian occupation of Crimea. “This creates an international network of officials who will now be engaged with Crimea on an ongoing basis,” comments Kuleba.

Such steps are highly unwelcome in Moscow. Russia responded angrily to the launch of the Crimea Platform initiative, with Kremlin spokesman Dmitry Peskov denouncing the August 23 summit as an “anti-Russian event.” Kuleba appears to welcome this response as an indication of the Kremlin’s uneasiness at the return of the Crimean question to the international agenda. “Russia is already feeling the political impact of the Crimea Platform because Moscow has long insisted the issue of Crimea has been resolved once and for all.”

Russian opposition to Ukraine’s Crimea Platform was not limited to public protests. Numerous sources reported intense behind-the-scenes Russian lobbying of German Chancellor Angela Merkel along with French, Italian, and Spanish leaders in a bid to derail Ukraine’s summit plans. The credibility of these claims was boosted considerably when Germany, France, Spain and Italy announced a last-minute change of plan and declined to send their respective foreign ministers to Kyiv for the summit as anticipated, opting instead for less high-profile representation.

Kuleba’s diplomatically worded response to this apparent snub hints at Ukraine’s frustration. “Given the longstanding position of G7 countries on supporting Ukraine and not recognizing the illegal occupation of Crimea, it was worthwhile to participate in this moment of history and we regret they could not attend the summit. Chancellor Merkel visited Kyiv on 22 August, but declined to attend the Crimea Platform summit. The message to Russia would have been much stronger if all G7 heads of state had attended the summit.”

Despite some attendance issues, the overall list of summit participants was impressive, featuring numerous presidents and foreign ministers along with European Council President Charles Michel. US President Joe Biden sent his energy secretary as did Germany, which afforded an opportunity for trilateral sideline talks with their Ukrainian counterparts on the Nord Stream 2 pipeline issue.

While conscious of Russian efforts to undermine the Crimea Platform initiative, Kuleba is upbeat over the impact of the summit. He is particularly pleased about the signal it sent to the Kremlin. “Russia lost the battle because the key political message of the summit was that Crimea is Ukraine. This message was communicated via coverage of the Crimea Platform in hundreds of media outlets around the world.”

While the recent Kyiv summit did not offer any immediate solutions to the Russian occupation of Crimea, Kuleba says the lessons of history provide good reason to think the deoccupation of the peninsula will eventually take place. “The Baltic states were occupied for decades by the USSR but this came to an end when they seized on the momentum created by a weakened Soviet Union in 1991. Ukraine did the same,” he notes.

Kuleba believes the Crimea Platform initiative also helps to address the problems created earlier by allowing Russia to separate Crimea from international efforts to end the conflict in eastern Ukraine via the Normandy Format and Minsk Agreements. He acknowledges that this diplomatic emphasis on eastern Ukraine meant the occupation of Crimea was “completely forgotten,” but notes that with the launch of the Crimea Platform, “we are now correcting that mistake.”

The Ukrainian Foreign Minister believes the most effective approach to the Crimea issue is to engage in a long-term campaign to reverse the Russian seizure. “It’s a two-step strategy. We must make sure the international community continues to put as much pressure as possible on Russia in the form of sanctions and non-recognition policies, while at the same preparing the ground for the moment when Russia is no longer strong enough to hold onto Crimea.”

The recently launched Crimea Platform is set to remain at the heart of these efforts. The inaugural summit in Kyiv was an eye-catching event that appears to have achieved its initial goal of putting the ongoing Russian occupation of Ukraine’s Crimean peninsula back into the global spotlight. Ukraine must now make sure this renewed international attention is maintained. “This was not a one-off event,” concludes Kuleba. “There will be more summits.”

Biden can reassert US leadership by backing Ukraine against Russia

President Biden must use his August 31 meeting with Ukraine’s President Zelenskyy to underline America’s commitment to defending the rules-based international order and supporting Ukraine against Russian aggression.