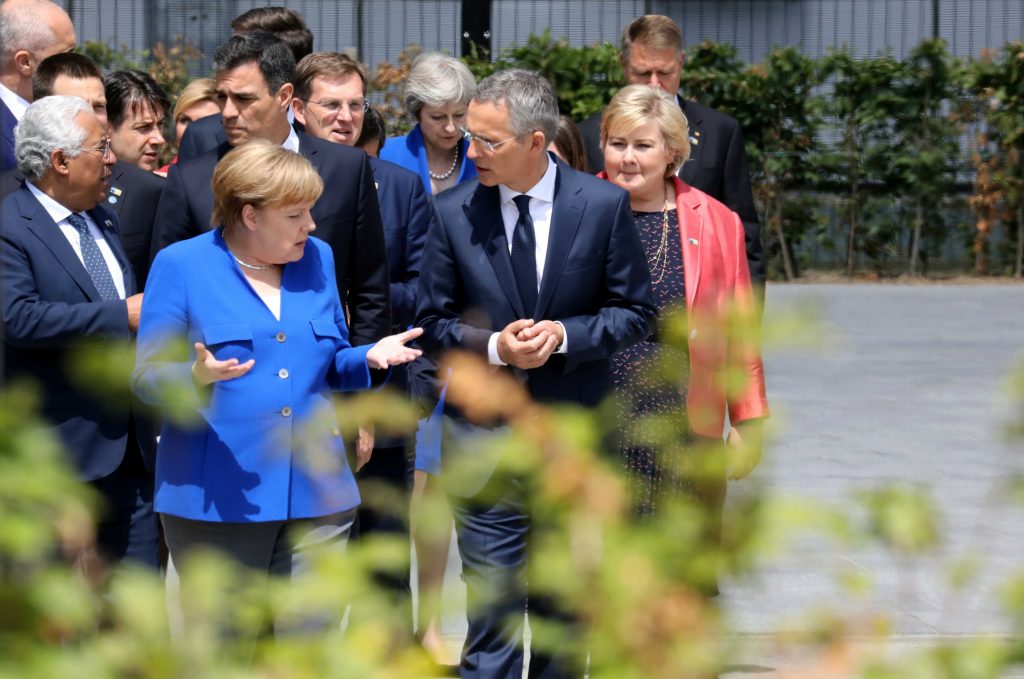 Two events that took place in Brussels this month—the NATO summit and the EU-Ukraine summit—have once again brought attention to the Western position on Russia’s unlawful war on Ukraine. Although very supportive of Ukraine, the final declarations of both summits fail to use clear language recognizing Russia’s responsibility for its ongoing multi-vector war on Ukraine.

Instead, the EU-Ukraine summit’s statement speaks of “external challenges” that Ukraine is facing, “acts of aggression by the Russian armed forces since February 2014,” “illegal annexation of Crimea and Sevastopol,” and “violence in certain areas of the Donetsk and Luhansk regions.” The language of NATO’s Brussels summit declaration is more direct, mentioning “Russia’s illegal and illegitimate annexation of Crimea and ongoing destabilization of eastern Ukraine,” and Russia’s “political, financial, and military support to militant groups,” “military interventions in the Donetsk and Luhansk regions,” and “troops, equipment, and mercenaries [stationed on] the territory of Ukraine.”

Both make two crucial mistakes. They treat Russia’s actions in Crimea and the Donbas as separate matters, not part of a coordinated, unitary war effort; and they do not unequivocally recognize Russia as the aggressor state that is directly responsible for waging an unlawful inter-state war against Ukraine, albeit an undeclared one.

Despite overwhelming evidence that Russia is waging war against Ukraine—in which the military invasion is just one component among many—the language of NATO and EU documents lends credence to Moscow’s “plausible deniability” strategy, which denies Russia’s role as the aggressor. This has serious implications for Ukraine, and for the international order.

When the West plays along with the Kremlin to describe Russia’s war on Ukraine, it is a win for Moscow and a loss for truth. A loss for truth is a loss for peace, stability, and order. As long as Russia’s undeclared war is not recognized as the unlawful war that it is—with Crimea and the Donbas forming part of a larger, single war effort—no peace solution can be crafted.

Moscow has shrouded the truth of its war on Ukraine through propaganda and subversive means by carefully constructing the appearance of an indigenous uprising.

In the Kremlin-crafted picture, Russia’s role is limited to “protecting the Russian speaking population from Ukrainian ‘Nazi’ extremists” in Crimea, and “supporting rebels in [the] Donbas who oppose the Euromaidan coup d’état” in Kyiv.

The Kremlin devised this strategy to protect Russia and its leadership from the legal consequences of invasion, and to prevent the international community from providing Ukraine with adequate assistance against an external aggressor.

Kremlin-sponsored unreality has permeated Western media and institutions, and polluted the thinking of many political actors. By echoing Russia’s lies, the international community has allowed Moscow to continue its war in the comfortable shadows of distorted reality without incurring the true cost of its war and destruction. Putin’s calculated strategy of disguising Moscow’s invasion has left Ukraine defending itself against an enemy largely “invisible” to the world.

The implications of NATO and the EU’s soft approach to Russia are manifold.

It affects Western reporting on the war, still allowing the media to embrace Kremlin propaganda narratives of a “civil war” in Ukraine. Such coverage undermines Kyiv’s calls for international support and solidarity.

The soft approach also has significant consequences for Ukraine’s legal action in international courts, where Kyiv is pursuing cases to hold Moscow liable for its illegal acts in Ukraine. The rights of millions of Ukrainians affected by Russia’s invasion depend on the accurate definition of Russia’s role in the armed conflict. International recognition of Russia as an aggressor is directly related to the matter of Russia’s liability for losses and damages sustained by Ukraine, Ukrainian citizens, and businesses as a result of Putin’s illegal invasion and occupation.

The use of accurate language about Russia’s war is of great significance for Russia’s standing in international organizations, and for its relationships with foreign nations. In particular, it has clear ramifications for the Western sanctions regime against Russia, which is divided into two separate blocks: sanctions for the occupation of Crimea, and sanctions in connection with the implementation of the Minsk accords. If Russia were recognized as the perpetrator of an inter-state war, there would be no choice but to drop this unreasonable distinction and apply the entire complement of sanctions until Russia’s aggression ends.

Truthful language is also of critical importance for decision making at the United Nations. So far, the UN, and the Security Council, has failed to execute its core responsibilities under the UN Charter for the maintenance of international peace and security.

If NATO and the EU officially recognized Russia’s direct responsibility for its unlawful inter-state war on Ukraine, there would be immense pressure on the UN to take firmer action on Russia, including a full international economic embargo and more effective international aid to Ukraine for its defense. The UN can put effective measures in place to demand that Russia unconditionally cease all forms of aggression, immediately withdraw all of its forces from Ukraine’s territory, end its occupation, and rescind the annexation of Crimea.

It is often argued that less confrontational language about Russia’s invasion of Ukraine is essential to leave space for diplomacy and to offer Putin a face-saving compromise he would be more inclined to accept. But Russia has only taken advantage of this naive position, and has made no steps toward ending the war. On the contrary, as Western diplomats wait for compromise and concessions from Moscow, Russia takes advantage of the passage of time to erase everything and anything Ukrainian in the occupied regions.

If the EU and NATO are serious about bringing peace to Ukraine and preventing the world order from being upended, they must they must get honest about Russia’s war against Ukraine and dispense with Moscow’s lies.

Russia should rightfully be called the aggressor for its unprovoked and unlawful use of force against Ukraine, and tools commensurate to Russia’s violations of international law should be employed to help restore the country’s sovereignty and territorial integrity, and to bring a just peace to Ukraine.

Roman Sohn is a legal expert, columnist, and civil society activist. Ariana Gic is an independent political and legal analyst, and columnist.

Image: German Chancellor Angela Merkel speaks with NATO Secretary General Jens Stoltenberg as they arrive for a family picture ahead of the opening ceremony of the NATO (North Atlantic Treaty Organization) summit, at the NATO headquarters in Brussels, Belgium, July 11, 2018. Ludovic Marin/Pool via REUTERS