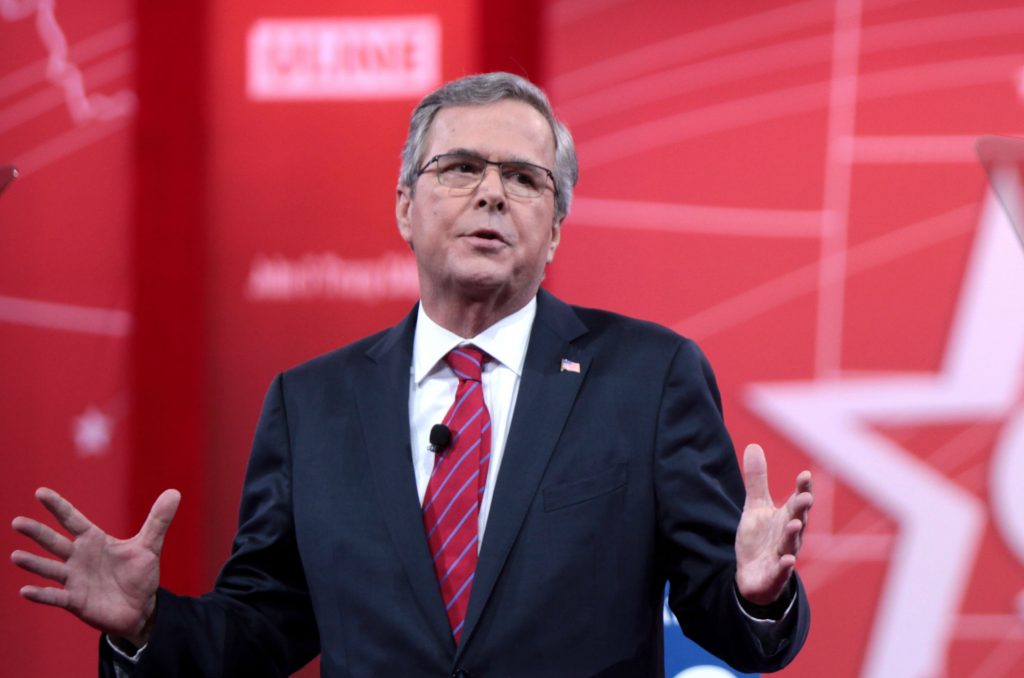 Donald Trump, the Republican Party’s most bombastic presidential candidate, thinks President Barack Obama is a wimp and that he’s weak on Ukraine.

“Putin does not respect our president whatsoever,” Trump said via Skype at the Yalta European Strategy Summit in Kyiv on September 11.

Trump’s language is consistent with other Republican critiques of Obama’s handling of the Ukraine crisis. Senators John McCain and Lindsay Graham have referred to the President as “weak,” and other GOP leaders have lamented that his approach is leaving the West open to more Russian aggression.

It is true that Putin’s appetite to encroach sovereign nations appears limitless, but the notion that Obama’s response is weak doesn’t reflect the impact sanctions have had on Russia. The ruble has declined 10 percent since July alone and Russia’s GDP is expected to lose 3.4 percent this year. Financial sanctions were responsible for 50 percent of Russia’s economic downturn in December 2014. Food prices have gone up nearly 30 percent since early 2014, and Russia’s finance minister said that sanctions have caused between $40 and $50 billion in lost capital.

So, what would the GOP candidates do differently? I’ve put together five questions that Russia and Ukraine observers should consider as we listen to the candidates discuss their Kremlin policies on September 16.

1. What does Ukraine mean to America?

For all of the tough talk about Obama needing to be more aggressive against Putin, Americans have no real context for Ukraine. What does America lose by not helping Kyiv defend itself against Russia? If Trump says Obama’s approach is “weak,” what is a “stronger” option—especially one that Europe would be on board with because the success of sanctions hinges on Brussels’ cooperation.

2. Sen. Marco Rubio says NATO should reaffirm its open door policy to any aspirant, including Ukraine and Georgia.

Is he or any other candidate ready to go to war with Russia over Georgia and Ukraine? I doubt it. For those unaware of what NATO membership entails, there is this special little detail in the NATO constitution called Article 5 that states that if one NATO member is attacked, then other members must intervene militarily. Putin already has troops in Abkhazia and South Ossetia, and Georgia lost an eight-day war with Russia in 2008.

There is, however, a precedent of welcoming nations into the Alliance that have recent histories of violence. Greece became a NATO member in 1952, just three years after its second civil war ended in 1949. Turkey joined in 1952 as well. Both countries were allowed in at the time because they were strategic military counters against the Soviet Union. Of course, the dynamics in Ukraine are vastly different, but Ukraine should be granted membership to protect America’s geopolitical interests.

Rubio would have to sell the idea to Europe, which has little interest in enlargement and is distracted by a serious migrant crisis. Hopefully Rubio will explain what Ukraine means for American security. So far, he has been the most hawkish candidate toward Moscow and the most vocal about the dangers Putin poses.

3. Jeb Bush mentioned something important about Russia-China relations during his four-day European tour in June that he should expand on.

During a press conference in Berlin, Bush mentioned something important: America can’t isolate Moscow to the point where “we push them into the arms of China.” Let’s unpack this statement. The relationship between Russia and China is growing. Trade between the two nations is about $100 billion per year, according to Reuters. Beijing is mulling investments in Russia’s infrastructure so that it can improve transport of Chinese goods through the country to Europe and the Middle East. And Moscow and Beijing are pursuing two projects to bring Siberian gas to China, potentially replacing Europe as the Russia’s largest gas customer.

Here’s the problem. China sees Russia as a huge financial risk. China’s economy is four times the size of Russia’s and Beijing has been slow to offer financing to Russia after being cut off from European financial markets.

Is there a way for America to exploit this? It would interesting to hear Bush discuss how possible it is to leverage China to rein in Putin’s expansionism. It may be a stretch but perhaps not.

4. Sen. Rand Paul wrote in Time last year that there is no real military option for the US in the Ukraine conflict. Does he still believe that?

Or more specifically, what does Paul mean? There is bipartisan support in Congress for Washington to arm Ukraine with lethal weapons. Does Rand oppose this?

5. Do we even know what Putin’s endgame is?

Putin has no interest in an all-out conflict with the West. He wants dominion over Eastern Europe, especially former Soviet states that answered to Moscow twenty-five years ago. Jeb Bush is right: Putin is a “bully” and most of the newer, former communist states like Poland and the Baltics know it. But as long as Putin is alive, he will see NATO and the EU as encroaching in his “sphere of influence.”

It will be important for the candidates to articulate how America can respond to Putin’s aggression in Europe and, now, Syria. For now, most GOP suggestions on how they would better deal with Putin seem to be all hat and no cattle. But hey, Trump is on stage. I’m sure whatever he says about Putin will entertaining. I just hope that he doesn’t pull a Putin and enter the stage bare-chested on a horse.

I pray we’re spared of that. Trump’s soundbites should be more than enough.

Image: Republican presidential candidate Jeb Bush said that America can’t isolate Moscow to the point where “we push them into the arms of China.” It’s a point that he should expand on at the second GOP debate on September 16. The relationship between Russia and China is growing, although China sees Russia as a huge financial risk. Is there a way for America to exploit this? Credit: Creative Commons/Gage Skidmore