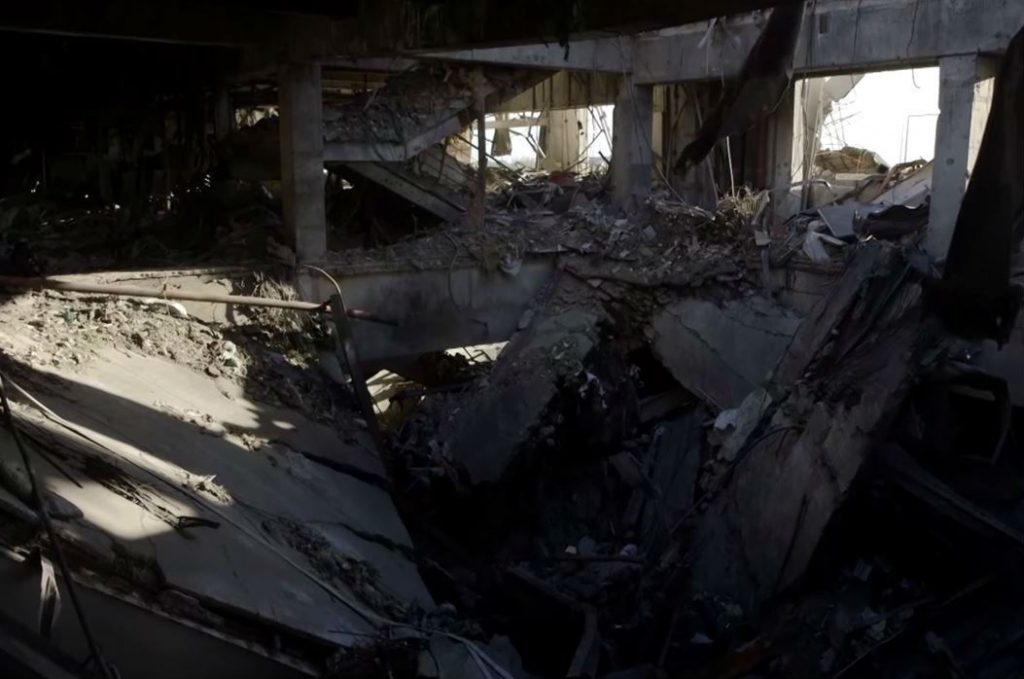 A haunting message from a Ukrainian soldier closes “Airport Donetsk,” a documentary about the 200-day siege that ended in January 2015.

“I can’t sleep at all,” said the downcast survivor. “I see them…I see my guys in my dreams.”

He was one of a dozen Ukrainians and Russians interviewed for this film by Radio Free Europe/Radio Liberty about how hundreds of Ukrainian soldiers held off thousands of Russians, tanks, and artillery. It’s a unique glimpse into the war itself because it contains footage gathered behind battle lines.

There is no narrator, no interviewer, no politics, and no exposition because none is needed. The soldier’s memories are spliced with footage of a gigantic, pulverized airport, with its pockmarked buildings, twisted equipment, and battered then felled tower. It’s hard to imagine anyone surviving this mayhem. Most did not.

Russian forces threw everything at the Ukrainians, including missiles that turned armored personnel carriers into torches. “We would be praying,” recalled a Ukrainian. “No one wanted to be burned to death.”

The lengthy airport battle became a symbol of Ukrainian resilience. The Russians, in turn, nicknamed their foes “cyborgs” for their super human stamina.

Several remarkable scenes, filmed behind Ukrainian lines, show the adolescent defiance of these soldiers as they strike back. Another shows them singing their national anthem amid gunfire. “I volunteered for combat… For my beloved Ukraine,” said one.

The camera moves back and forth from personal remembrances to wide angle pans showing burnt out vehicles, spent artillery shells, battle scenes, and mutilated bodies.

In January, Russian military units and tanks arrived to assist the separatists from Donetsk. They rooted Ukrainians out of the airport tower and outbuildings, then corralled them into a relatively small section of the bombed-out terminal.

The Ukrainians had no tank or artillery support, medical care or rations at the end.

The tipping point was reached when Ukrainian tanks coming into the airport suddenly turned back. “Nobody came,” said one. “We asked for help.”

At that point, an officer told his comrades: “It’s up to us, not our generals or commanders.”

Eventually, the Russians swarmed the place and detonated an explosion that brought the terminal’s concrete floors onto the Ukrainians below, crushing most of them to death. They still held out, gathering their wounded together so they could keep warm as they slowly died.

“The hardest thing is to hear them moaning and wheezing before they die,” said one. “We knew there would be no evacuation.”

Some thought about suicide rather than surrender because they knew they would likely be killed as prisoners. The last few minutes of the film concern the torture and execution of a Ukrainian prisoner even though the battle was finished.

“They beat us for six or seven hours with pipes, automatic rifles, bats, anything they could lay their hands on,” said a Ukrainian in an interview. The video shows his battered and swollen face and that of a comrade, Ihor Branovytsky, who was more severely beaten and cut.

“If they had called an ambulance and taken [Ihor] to a hospital his bones would have survived,” he said. “But ‘Motorola’ [a Russian separatist] fired two bullets in his head. He said he did it out of mercy.”

“Motorola,” a citizen of Russia, firmly stated on camera: “No, I don’t execute prisoners.”

It was a chilling moment, but his alleged cruelty was in contrast to a tribute given by another Russian separatist who spoke as he lined up the Ukrainian captives at gunpoint.

“I have respect for these soldiers,” he said. “They fought to the death. I hate their commanders. They let them die.”

Image: “Airport Donetsk,” a new documentary about the 200-day siege that ended in January 2015, was produced by Radio Free Europe/Radio Liberty. Credit: Screenshot from Airport Donetsk