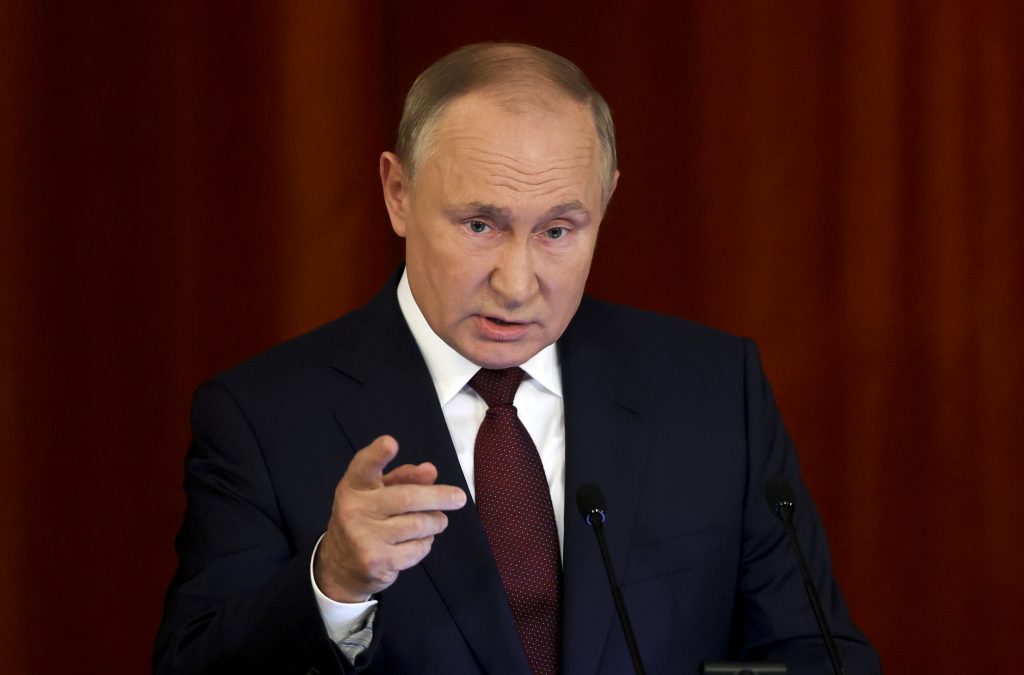 In recent weeks, Russian President Vladimir Putin has been escalating his hybrid war against the Western world. However, his annual speech to Russian ambassadors on November 18 saw Putin at his most uninspired and defensive. The Russian leader’s long list of criticisms and complaints left the distinct impression that while everything in Russian foreign policy has gone wrong, none of it is actually his fault.

Unsurprisingly, Putin dedicated much of his speech to the war in Ukraine, which he acknowledged as the Kremlin’s key foreign policy concern. Less typical was his sharp criticism of the role played by Germany and France in efforts to resolve the conflict. Putin accused Paris and Berlin of “indulging the current Kiev leadership’s course on dismantling the [Minsk agreements] which, unfortunately, has led the talks and the settlement itself into a dead end.”

These comments came soon after an unusually strongly worded joint statement issued by the French and German foreign ministers that accused Russia of deliberately blocking peace talks and warned of “serious consequences” if Moscow launches a fresh military offensive against Ukraine. Clearly, when Germany and France speak up, Putin listens.

The Russian leader then accused the West of collectively “exacerbating the situation by supplying Kiev with modern lethal weapons, conducting provocative military exercises in the Black Sea and other regions close to our borders.” This confirms that arms deliveries to Ukraine make Putin sit up and take notice.

Putin’s most critical comments focused on the West’s alleged failure to take Russia’s demands seriously with regard to Ukraine. “Our partners are peculiar in the sense that they have a very, to put it mildly, superficial approach to our warnings about red lines,” he complained. Some have interpreted this as an indication of his readiness to imminently escalate in Ukraine. I would argue that it points to Putin’s begrudging respect for demonstrations of strength.

The Russian leader’s comments on the future of the Ukraine peace process left the impression that France and Germany’s uncompromising recent position had indeed been effective. In an infamous essay published earlier this year, Putin questioned Ukraine’s right to statehood while claiming that Russians and Ukrainians were “one people.” He has persistently refused to talk to President Zelenskyy and argued that as the Ukrainian authorities are Western puppets, it makes more sense for Russia to talk directly to the United States, Germany and France. In his speech this week, however, Putin called for a revival of the Normandy talks, which include Ukraine.

Putin’s other key focus was Belarus. Here, he offered a predictably misleading summary of recent events but ultimately struck a surprisingly conciliatory tone.

The Russian president accused the West of exploiting the current migrant crisis on the EU-Belarus border “as a new reason for tension in a region close to us,” while avoiding any mention of the fact that Belarus has manufactured the entire crisis by importing migrants, with many arriving via Russia itself. At the same time, events on the ground indicated that Putin had already conceded defeat on this issue to Poland and the EU, with Belarusian security forces reportedly removing migrants from the border and repatriating the first planeloads to Iraq.

In perhaps the most surprising segment of his speech, Putin acknowledged the existence of domestic “problems” in Belarus and declared that Russia “certainly supports dialog between the authorities and the opposition.” This radical and welcome change of heart was actually quite typical of Putin’s approach to foreign policy. When confronted by superior strength, he becomes conciliatory.

For much of his speech, Putin appeared resigned to ongoing confrontation with the West. “Regarding European affairs, I have to state with regret that the opportunities for cooperation continue to narrow,” he noted. “Even though the EU remains our leading trade and economic partner, the previously rather productive Russia-EU cooperation is currently experiencing major difficulties. The EU continues to push us back with its sanctions and unfriendly actions.”

His assessment of NATO ties was equally downbeat. “A similar, if not more depressing, situation prevails in our relations with NATO, which has adopted a markedly confrontational stance and is stubbornly and demonstratively bringing its military infrastructure closer to our borders.” Putin also spent a portion of his speech repeating familiar gripes over NATO expansion.

The Russian president was keen to underline the geopolitical significance of ties with the US, while at the same time bemoaning the current state of the relationship. “Russia-US relations, as you know, largely underlie global security and stability. At this point, these relations, to put it mildly, are in an unsatisfactory state. Diplomats from both countries are experiencing major problems. Embassy staffs have been cut and embassies cannot function properly.”

Putin blamed the recent reductions in embassy staff on “the provocative policy pursued by US authorities,” preferring not to mention that Russia had cut the staff of the US Embassy in Moscow from 1,200 to 120. In fact, Putin appeared more concerned about property than people. “Our property in the United Sates has been seized in violation of every international standard and rule, every single rule,” he complained.

Despite this rather grim portrait of Russian-US ties, Putin did have one positive observation. “Nevertheless, the summit with President Biden in Geneva last June opened up a few opportunities for a dialogue and gradual alignment, straightening out our relations, and it is important that both sides consistently expand the agreements reached,” he stated. This indicates that the Russian leader looks to Biden as a potential ally in an otherwise worsening relationship, and will likely be seen as vindication for those who branded the Geneva summit a mistake that should not be repeated.

I have been following Putin’s speeches for two decades and cannot recall an address as humble or defensive as this week’s performance. He came across as a man who recognizes he is destined to lose and is looking to sue for peace. Instead of his usual bellicose rhetoric, Putin spoke of the need “to push for serious long-term guarantees that ensure Russia’s security.” Apparently, the West has been more effective in demonstrating its resolve than many had previously believed.

While Putin appeared strikingly weak during his foreign policy address, it would be reckless to underestimate him. The Russian leader may have given the impression that his many offensives have failed to produce the desired results, but he still has a vast arsenal at his disposal ranging from conventional and mercenary forces to cyber and energy weapons. Declining powers are notoriously dangerous actors on the global stage, and Putin retains a proven capacity for international aggression.