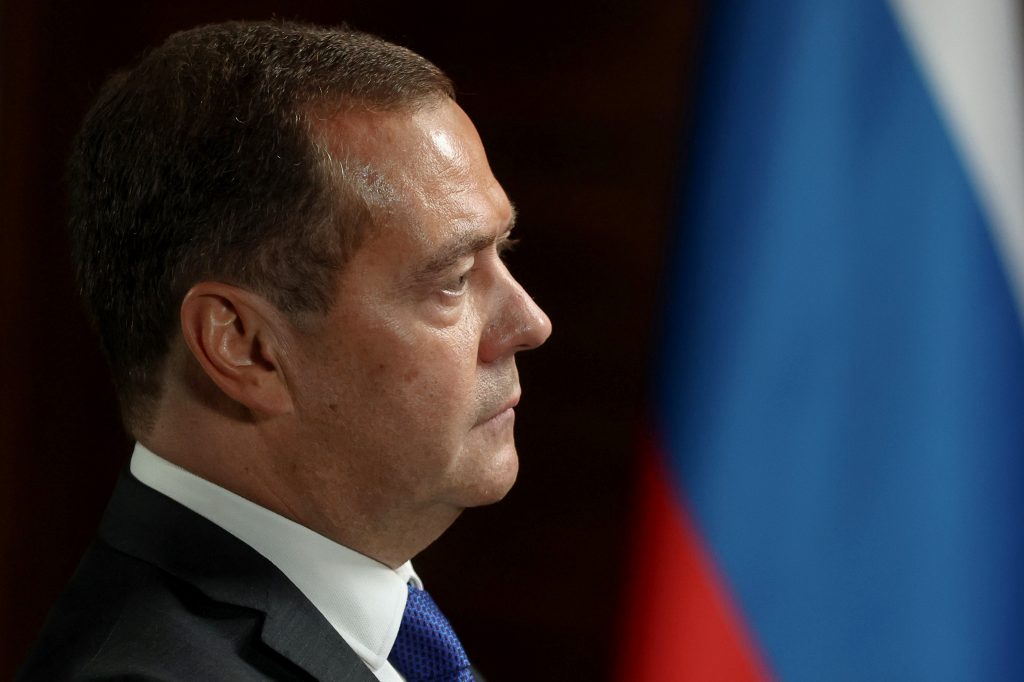 The new pastime of the Russian elite appears to be penning abusive essays about Ukraine. Russian President Vladimir Putin set the tone in summer 2021 with a 5000-word epic that questioned the legitimacy of Ukraine’s borders and laid bare his own imperial ambitions. Former Russian president and prime minister Dmitry Medvedev has now published a Ukraine hit piece of his own. While significantly shorter than Putin’s effort, this latest text is arguably even more poisonous.

Writing in Russian daily Kommersant on October 11, Medvedev outlined five reasons why he believes it is “meaningless” to engage in talks with the current Ukrainian authorities. He did so in strikingly inflammatory and vulgar language that hinted at the degree of Russian rage over Ukraine’s defiant refusal to accept Kremlin dominance.

As is customary in contemporary Russian discussions about Ukraine, Medvedev’s essay played heavily on emotive WWII themes while completely avoiding the far more awkward but pertinent topic of Russia’s ongoing war against Ukraine, which is now in its eighth year. The Russian occupation of eastern Ukraine and the Crimean peninsula was conveniently passed over without mention. Instead, responsibility for the collapse in bilateral ties since 2014 was placed squarely on Ukraine, while the Ukrainian government’s efforts to defend the country were framed as unprovoked and irrational anti-Russian acts carried out in the service of a “rabid nationalist” minority.

This blanket refusal to acknowledge the disastrous consequences of Russian aggression against Ukraine is entirely in keeping with the official Kremlin position. Far less typical and considerably more disturbing was Medvedev’s decision to emphasize Ukrainian President Volodymyr Zelenskyy’s Jewish background.

In one borderline antisemitic passage, Medvedev declared, “the current president of this exhausted country is a person of certain ethnic roots,” before going on to compare Zelenskyy to German Jews forced to collaborate with the Nazi regime. Such shameful tactics have been a routine part of the Kremlin’s anti-Ukrainian information attacks for much of the past seven years, but rarely before have senior Russian officials stooped so low.

Medvedev spent much of the second half of his article pouring scorn on Ukraine’s “weak and dependent” leadership. Directly echoing claims made by Putin in his July essay, Medvedev argued that Ukraine was currently under the “direct foreign control” of “American patrons” and “overseas masters,” before concluding, “It makes no sense for us to deal with vassals.”

Rather than engaging with the present Ukrainian government, it would be far better for Russia to wait until “sane leaders” came to power in Ukraine, claimed Medvedev. “Russia knows how to wait. We are patient people.”

The sheer vitriol of Medvedev’s text has helped generate considerable attention, but does his crude rant really deserve to be taken seriously? After all, Medvedev himself has not held a top government post since resigning as prime minister in January 2020. Since then, he has been banished from the front ranks of Russian politics to the relative wilderness of his current position as deputy chair of the country’s Security Council.

While Medvedev’s political profile may be significantly diminished, his prior seniority and unique status as Russia’s former president mean that his position on Ukraine carries semi-official weight and cannot be easily dismissed. Underlining this point, Kremlin officials noted approvingly on Monday that Medvedev’s article “runs in unison” with Russia’s view of the current Ukrainian government.

What stands behind this recent flurry of anti-Ukrainian articles by leading Russian politicians? The content of both Putin’s and Medvedev’s essays strongly suggests that one key motivating factor is a desire to avoid responsibility for the historic collapse of Russian influence in Ukraine.

The undeclared war launched by Putin in 2014 has cost over 14,000 lives and left millions of Ukrainians displaced. It has fueled an unprecedented rift between the two countries that has made itself felt everywhere from trade ties and the media to culture and religion. In every single sector, Russia is in retreat.

Rather than acknowledge the self-defeating nature of the war, Putin and Medvedev both remain firmly in denial, preferring instead to point the finger at meddling foreigners and Ukrainian extremists. With centuries of Russian domination over Ukraine seemingly drawing to a close, they are understandably desperate to blame anyone but themselves for the mounting debacle.

The two authors may also have had more ominous intentions in mind. Putin’s article was unapologetic in its defense of Russian imperial claims to Ukraine, and was widely interpreted as a declaration of war against Ukrainian statehood. Medvedev was in many ways even more explicit, denouncing Ukraine for alleged hostility towards Russia while rejecting the entire notion of negotiations with the current Ukrainian government as both senseless and harmful.

Significantly, there was no talk of room for compromise or any recognition of the need for peace. On the contrary, Russia clearly believes it has both time and history on its side, and is prepared to wage a long war for many more years in order to force Ukraine back into the Kremlin orbit.

Coming so soon after Putin’s own treatise on Ukraine, Medvedev’s article is a wake-up call for anyone still clinging to hopes of a negotiated settlement to the conflict in Ukraine. The international community now needs to belatedly accept that Russia’s leaders have no intention of living peacefully alongside a sovereign and independent Ukraine. Instead, they view the loss of Ukraine as an existential threat to Russia itself, and are prepared to go to extraordinary lengths to prevent what they regard as a potential geopolitical catastrophe on a par with the collapse of the Soviet Union.

The scale of this Russian obsession with Ukraine should not be underestimated. It has already plunged the world into a new Cold War. Unless appropriate deterrent measures are urgently put in place, it could yet lead to a major conventional war erupting in the heart of Europe.